ABOVE: Marlee Matlin (at podium to the left in the photo) is one of my favorite performers at Candlelight. Without speaking the words herself, with the aid of her interpreter, she presents a truly dramatic and emotional performance of the poem One Solitary Life using only her hands and face. The Voices of Liberty singer in the foreground is Kevin Miles – the narrator of the Glory and Pageantry of Christmas which was presented for years at the Disney Village at Lake Buena Vista.

Without a doubt, the most popular event at the America Gardens Theatre is the Candlelight Processional, relocated to EPCOT from the Magic Kingdom in 1994. As a testament to its popularity, visitors pay for dinner at EPCOT’s pricey restaurants just to get reserved seating for one of the three nightly performances.

Candlelight Processional is the retelling of the Christmas story in word, music and song with a guest narrator. The music is provided by the Voices of Liberty who form the base of the tree, Disney’s cast members who form the tree in the center of the stage, a symphony orchestra of 51 professional musicians from central Florida, and choir members from high schools and church groups from Florida and across America. Guest narrators from sports, film, and music add to the excitement. Central Floridian and Rollins College music professor Dr. John Sinclair conducts the orchestra and choir numerous times during the season. Conductor Derrick Johnson arranged most of the music featured at Candlelight and until his recent dismissal was the official conductor.

My daughter began performing at Candlelight with her high school choir in November 1998. Parents volunteered as chaperones, and we volunteered as many times as possible because we loved watching the Candlelight performance and we got free tickets to EPCOT. You never knew if you would be watching backpacks and purses in the tent behind the Italian Pavilion, if you would be sitting backstage in case a student fainted or needed medical treatment, or if you would sitting in the audience to keep watch in case one of the kids was taken backstage. If you were backstage, you were usually greeted by the narrator for the evening. It was worth the gamble for a chance to hear and see the performance from the VIP area near the front of the stage! 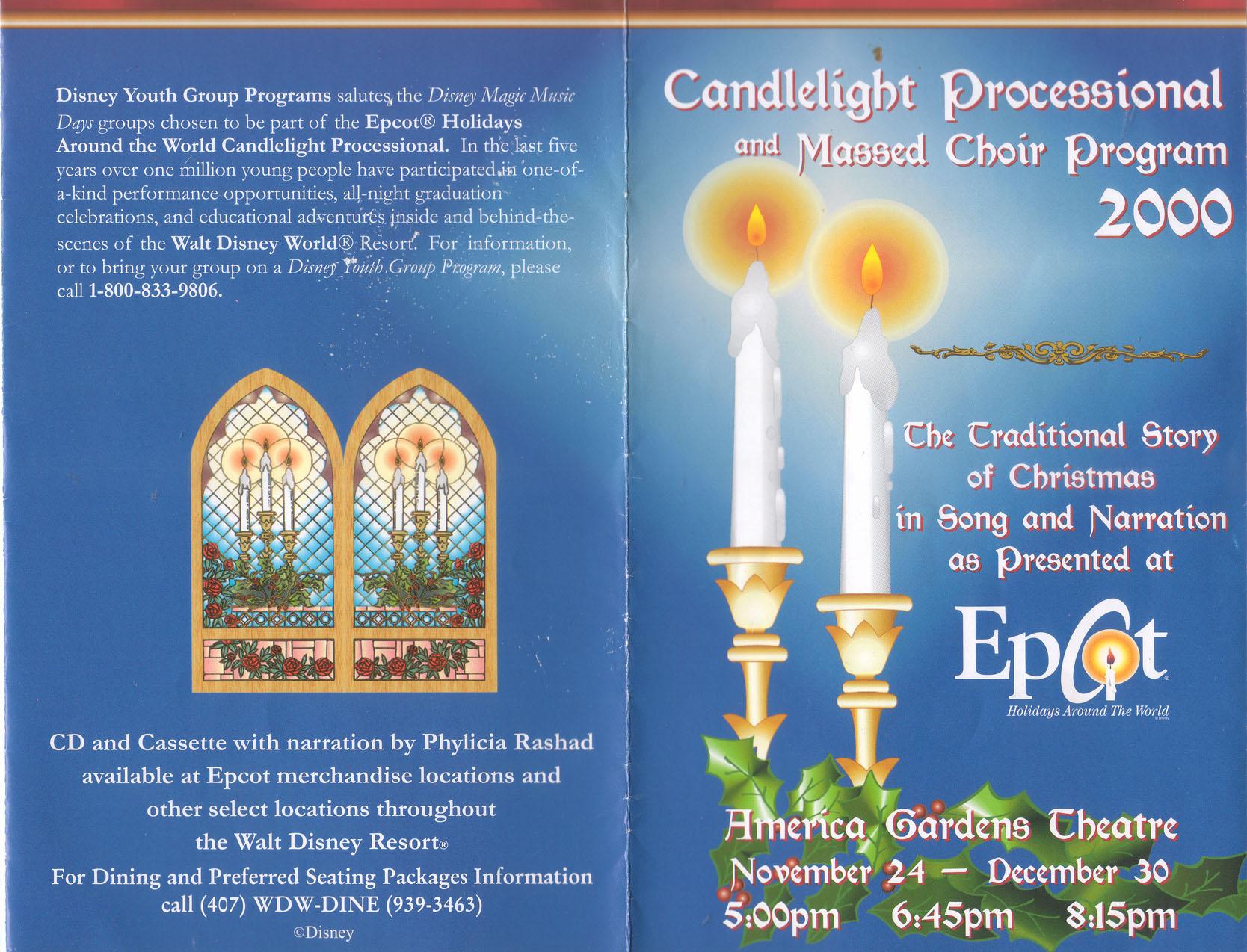 Waiting backstage on a very cold evening in 1999, chaperones were greeted with a hearty handshake and friendly greeting from MASH star David Ogden Stiers. It is also a tradition for the guest narrator to stop in and greet the choir performing for the first show of the night. Many stars have come back to greet us but none more popular than narrator LaVar Burton. It was always a great moment when LeVar would sing the first words… Butterfly in the sky… and all the kids in the tent (along with the adults) would sing the Reading Rainbow theme song. We all knew him well from his role as Jordie on Star Trek: Next Generation, but the kids grew up with him on Reading Rainbow on PBS.

My most special memories of Candlelight are not those of a guest narrator, but of Fred Rogers. The gentle kind spirit behind Mr. Rogers Neighborhood would drop backstage to say hello to the choir in the rehearsal tent on his yearly trips to experience Candlelight with his family. On his visits in the years prior to his death in February 2003, he would arrive amidst cheers and begin to sing the opening line of his theme song. The choir would break into “It’s a wonderful day in the neighborhood…” without skipping a beat.

It never failed to bring tears to my eyes, having met him 20 years earlier when I worked at Channel 24 the local PBS affiliate, and experiencing first hand his gentle nature and deep love for children.

My daughter graduated high school in 2002 but as luck would have it, her high school choral director allowed alumni and parents who learned the music to participate at Candlelight. Beginning in 2002, I joined my daughter and others from her former high school at Candlelight. Without a doubt, each performance is the most fulfilling, exciting, emotional event of the Christmas season. If all the decorations, trees, holiday parties, and food were absent from my home, singing at Candlelight would be enough. Since 2002 my daughter and I have sung more times than I can remember with narrators from stage, screen, and music. The performances of Rita Moreno, Marlee Matlin, Steven Curtis Chapman, and Edward James Olmos stand out from all the rest. Their emotional deliveries and final words to the audience always bring the audience to their feet, and elicit muffled cheers from many of us on stage.

The current CD recording of the Candlelight Processional with narrator Phylicia Rashad was recorded here in Central Florida with local high school students, just as in the live event. My daughter and her high school choir are part of the massed choir featured on the CD. There have been several musical selections changed since the recording and the narration and music are not equalized, but it is still a great recording.

All of the narrators do a great job, but there is only one that brings tears to my eyes every time — and that’s Rita Moreno. Unless you have witnessed her powerful, dramatic and emotion filled reading of the poem “One Solitary Life,” it is impossible to explain the impact it has on audiences and performers. She delivers the beginning paragraph calmly but with conviction. The second paragraph is delivered with increasing drama and resolve. The final paragraph is delivered with such intensity that she is almost shouting—the veins on her neck bulging. The last phrase is  delivered with intense drama and emotion with her hand raised in the air as she pauses after each of the last few words are spoken  “that one – – – solitary – – – life!

In my opinion, her narration is unsurpassed by any who have narrated before her and any who will narrate after she has gone. If you are familiar with Rita Moreno’s dramatic delivery, you can relive it reading the poem below. If you have never experienced her delivery, try to imagine it. And try to hear her at least once in person. 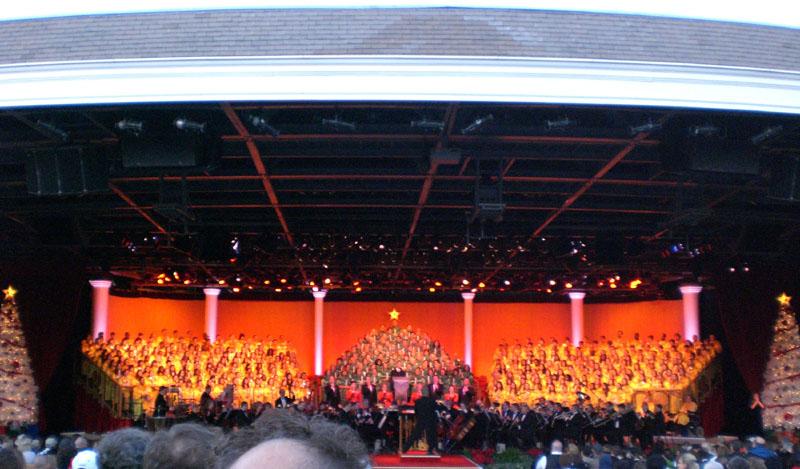 He was born in an obscure village, the child of a peasant woman. He grew up in still another village, where he worked in a carpenter shop until he was thirty. Then for three years, he was an itinerant preacher. He never wrote a book. He never held an office. He never had a family or owned a house. He didn’t go to college. He never visited a big city. He never traveled two hundred miles from the place where he was born. He did none of the things one usually associates with greatness. He had no credentials but himself.

He was only thirty-three when the tide of opinion turned against him. His friends ran away. He was turned over to his enemies and went through the mockery of a trial. He was nailed to a cross between two thieves. While he was dying, his executioners gambled for his clothing, the only property he had on earth. When he was dead, he was laid in a grave through the pity of a friend.

Nineteen centuries have come and gone, and today he is the central figure of the human race and the leader of mankind’s progress. All the armies that ever marched, all the navies that ever sailed, all the parliaments that ever sat, all the kings that ever reigned, put together, have not affected the life of man on this earth as much as that one solitary life. 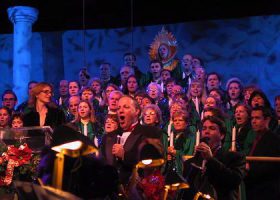 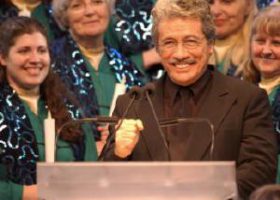 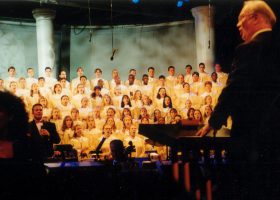 Conductor Derrick Johnson is responsible for almost all of the arrangements sung at Candlelight at EPCOT. For reasons unknown, he disappeared from...

This is Ashley processing into the theater with other high school students from around the nation. Lake Mary High Schools chorus students... 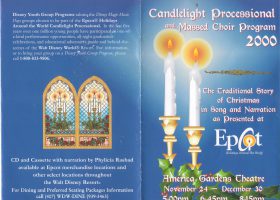 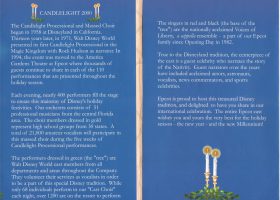 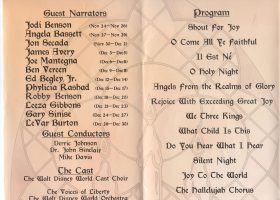 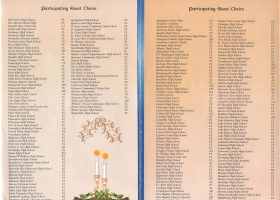 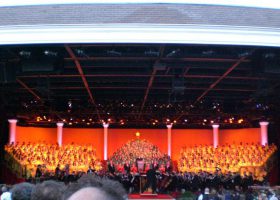 America Gardens Theatre has changed since it was just an open air stage. This shows the stage decked out for Candlelight in... 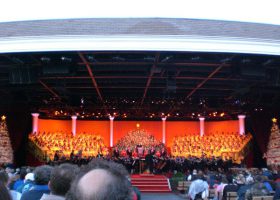 On Saturday, December 5, 2009, my daughter and I spent the day park hopping at Walt Disney World. This was our Christmas... 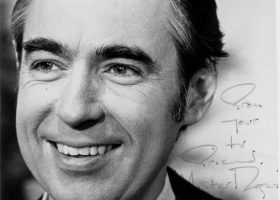 I met Fred Rogers in person in the early 1970s when I was working at Channel 24 WMFE-TV, then located in the...

Allears.net has up to date information on the Candlelight Processional at EPCOT for the current season and past seasons.

Local resident and Director of Music at Rollins College, Dr. John Sinclair is a repeat conductor at the Candlelight Processional at EPCOT's American Gardens Theatre. Highly respected and a favorite with choirs, Dr. Sinclair has been conducting at Candlelight for many years.