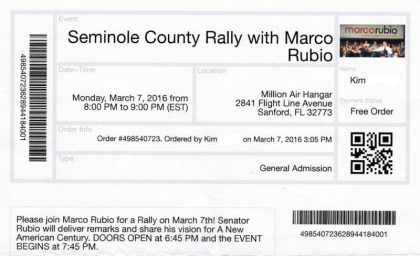 A number of presidential candidates visited the Orlando area in 2016 during the primary season, but  only one visited Sanford — Florida Senator Marco Rubio. Rubio held a rally in the Million Air hangar at the Sanford-Orlando International Airport on Monday March 7, 2016 — his last stop of the day.

A jubilant crowd filled the hangar and waited for over an hour for Senator Rubio’s plane to land.

The event began with the recitation of the Pledge of Allegiance and an invocation in English and Spanish asking God to help our nation in the name of his son Jesus Christ.

Rubio was introduced by Sheriff Don Eslinger and greeted with thunderous applause as he bounded onto the stage, not the least showing what must have been a grueling day of speeches before reaching Sanford at about 8:20 p.m.

Rubio was engaging and very likable. His speech was inspirational and emotional as he addressed the issues facing the nation over the next decade, and offered his ideas on how each of the issues should be addressed.

He spoke of his family history – his parents who came to the United States from Cuba in the mid 1950s with no money, no possessions, and no English. The first words they learned were “I’m looking for a job.”

He spoke of his grandfather who was born in 1899 when there were no airplanes, and the day they watched a tiny black and white television set together as a man walked on the moon. He told Marco, after witnessing the event: “Americans can do anything!”

There were people of all ages and races in the crowd – from very young children to seniors who appeared to be well into their 80s.

Explore photos from the event under Attachments below. 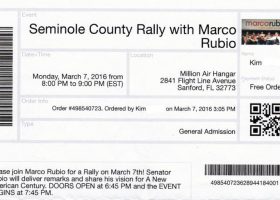 Ticket to the Seminole County Rally with Marco Rubio March, 7, 2016. 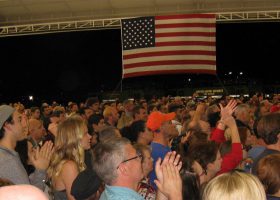 View of part of the crowd from the street side of the hangar. Stage was to the right in the photo and... 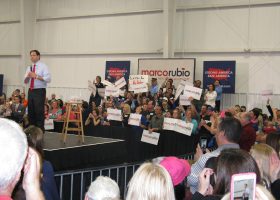 Rally at the Million Air Hangar at the Sanford-Orlando International Airport at 8 p.m. Monday, March 7, 2016. 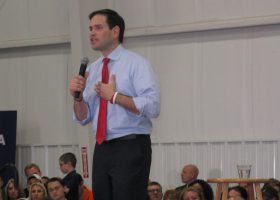 Marco Rubio speaking at a rally at the Sanford-Orlando International Airport on Monday, March 7, 2016 at the Million Air Hangar. He... 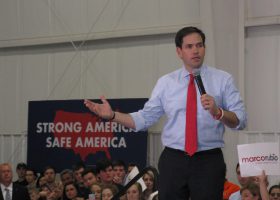 Marco Rubio speaking at a rally at the Sanford Orlando International Airport on Monday night, March 7, 2016.