“The Founding of Correct Craft” an oral history presentation by Walter N. Meloon for the Pine Castle Historical Society Annual Meeting on Sunday, December 3, 2017 at the Pine Castle Woman’s Club.

Walter Meloon is one of Pine Castle’s most esteemed citizens. In 1925, his grandfather, Walter C. Meloon, started the Florida Variety Boat Company, soon changing the name to the Pine Castle Boat Company, and then in the 1940s, to Correct Craft. The Meloons were renowned for the quality of their boats and built the first boats used for the Winter Park Scenic Boat Tour and Cypress Gardens. They also popularized the new sport of water skiing.

During WWII, Gen. Eisenhower asked the company to build 300 storm boats to carry troops across the Rhine. They not only built the requested 300, but another 100 as well, helping to win the war in Germany.

Mr. Meloon tells about his experiences as a Captain with the Pine Castle Volunteer Fire Department. He was the first fireman to arrive on the scene of the horrific train crash which occurred near Oak Ridge Road and set the perimeter for firefighters who arrived from other stations and from the Pine Castle Air Force Base. 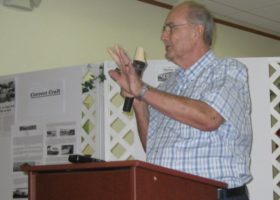 "The Founding of Correct Craft" an oral history presentation by Walter N. Meloon for the Pine Castle Historical Society Annual Meeting on...

There are currently no video related to this memory.
Walter Meloon, Part I