IllumiNations: Reflections of Earth is a show, performed nightly at Epcot at the Walt Disney World Resort in Orlando, Florida. It premiered to the public on October 1, 1999 as IllumiNations 2000: Reflections of Earth as part of the Walt Disney World Millennium Celebration. It was so successful that after the celebration ended the 2000 was dropped from the name and the show was continued. It was previously presented by General Electric, and now Siemens, at a cost of approximately $17,000 per show.

Disney hosted VIPs, the Press, and individuals who worked on the project “Reflections of Earth Team Members” to a gala preview on September 30, 1999. The park was closed early and guests were bussed to the backstage area entering adjacent to the China Pavilion. The chefs at each of the nations around the world showcase created masterful culinary treats for those in attendance. Fresh strudel in the courtyard at Germany, whole pigs cooked over pits in Morocco, delicate pastries in France, to mention a few. Oliver Peters was the editor at Century III Teleproductions responsible for the video on the Earth globe and was invited to the gala event.

Reflections of Earth was performed for the last time on September 30, 2019.  WATCH this video of the last performance.

It is sad that the message of Reflections of Earth – that we all share the same beginnings and hope for the future – will not be celebrated nightly at EPCOT. It saddens me greatly that its time has passed. There has never been any other performance at Walt Disney World that has brought me to tears each time I experience it. I was a guest at the performance of the World Symphony Orchestra at the grand opening in October 1971 and have visited more times than I can remember and have witnessed many amazing performances, but Reflections of Earth was and will always be the most magnificent of them all. Thank you Don Dorsey and everyone on your team who made Reflections possible!

Torches, flames and 300 gallons of propane will cap the fiery millennium makeover of Epcot.

In the process, the October debut of Illuminations 2000: Reflections of Earth also has ignited an opportunity for Century III, a local film and post-production house: The firm has produced a film consisting of a series of images using an all new video production technique.

“The show begins with simple lit torches placed around the lagoon and an announcer asking the audience to gather around the fire for a story,” says Don Dorsey, owner of Anaheim-based Dorsey Productions Inc. and chief creator and director of the new Epcot show. “And then the torches are blown out and the chaos begins.”

That’s not hyperbole. To accommodate the first section of the show, called Chaos — which represents the explosion that takes place at the beginning of the universe — a custom-made barge, aptly named the Inferno, will ferry 37 different valve-controlled flame elements onto the Epcot lagoon. Eric Tucker, a world-renowned fireworks designer, will handle the pyrotechnics.

Then, Dorsey says, a second barge carrying a 28-foot globe floats onto the lagoon. Mapped onto the surface of the globe’s continents are light-emitting diodes, or LED screens, a new technology in film production.

“The video segment picks up the story at the point of when the earth is being cooled,” says Dorsey. “The film is an abstract representation. It’s more about the unique experience that man has on earth.”

The fruit of several months-long labor will show up in a one of a kind screen. The globe’s screens are made up of thousands of pixels similar to those created for outdoor signs, only flared outward in order to project video images. “LEDs have never been thought of as pixels to project images before,” says Ross Cibella, president of Century III.

But that’s not all. In a surprise finale, the globe opens and a 38-foot torch emerges. “The torch is like 120 giant Roman candles each shooting out about nine balls of fire,” says Dorsey. “My 1,000 points of light.” 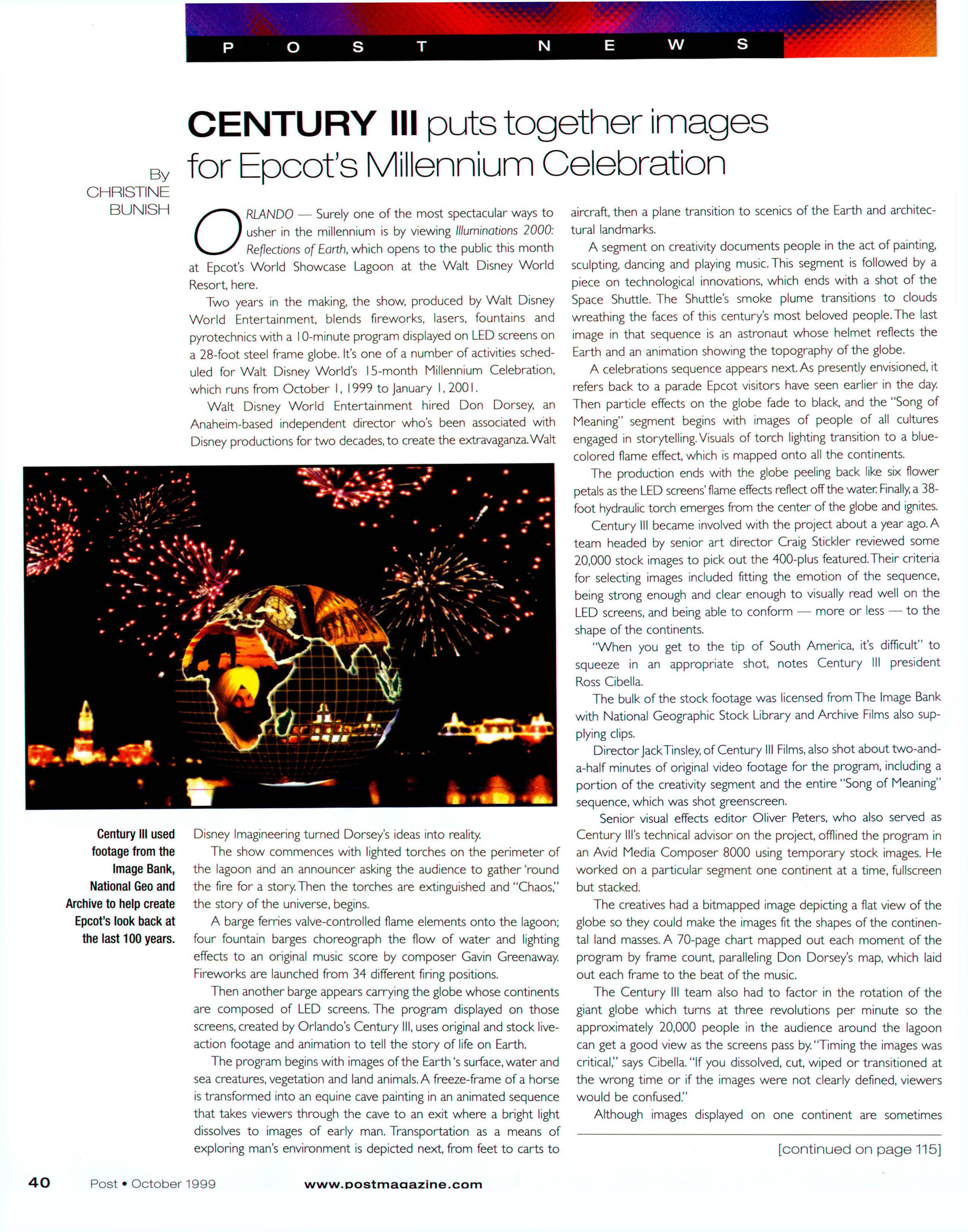 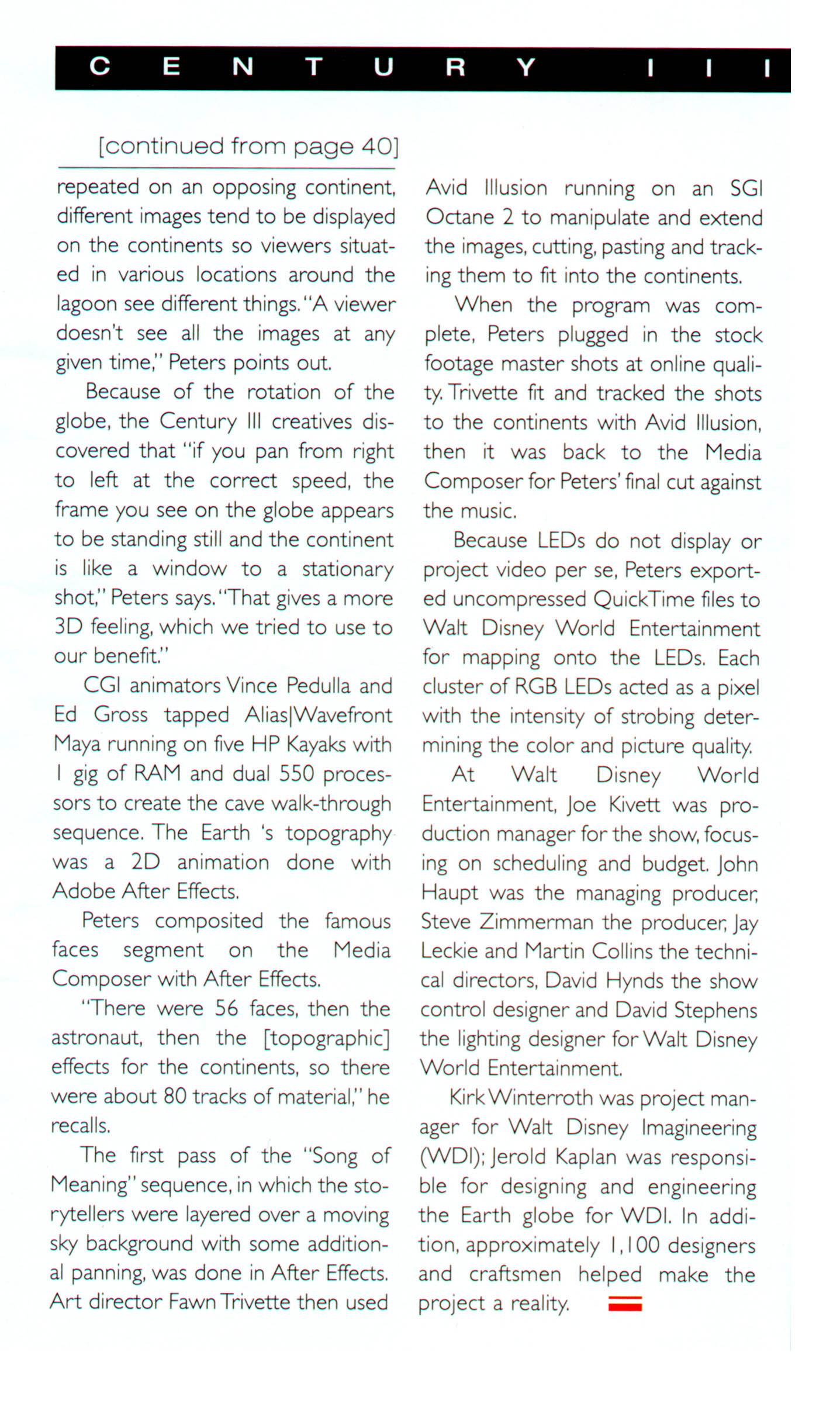 SEARCH OrlandoMemory.info for more memories, images and audios about “Reflections of Earth.” 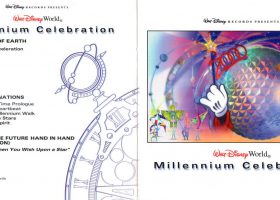 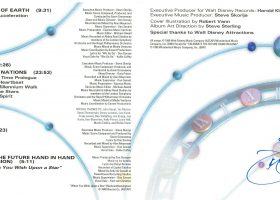 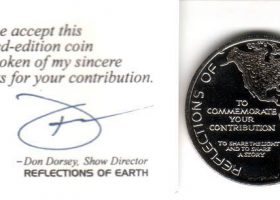 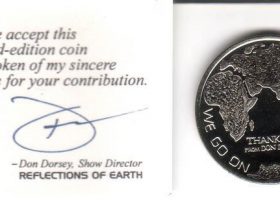 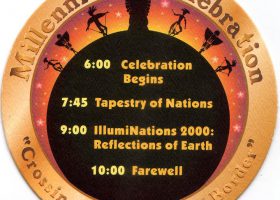 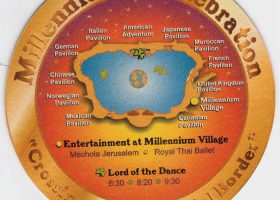 Don Dorsey is currently in his twenty-eighth year as audio production consultant, and seventeenth year as a designer and director of fireworks... 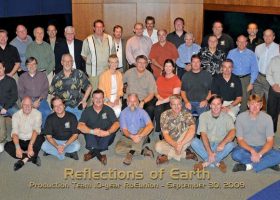 Individuals who played roles in the creation of Illuminations: Reflections of Earth Millennium reunited at EPCOT on September 30, 2009, for a...