On Friday March 11, 2016, Senator Ted Cruz and Carly Fiorina were interviewed for a Town Hall segment on the Sean Hannity show at the Faith Assembly of God at 9307 Curry Ford Road in Orlando.

The line of enthusiastic and energized supporters snaked back and forth through the parking lot of the church and all in line were conversing about the primary and their candidate, Senator Ted Cruz. The admiration and respect for Cruz was widespread primarily based on the fact that he had stood up to the Republican leadership in Congress and done exactly what he told his constituents in Texas he would do when he was elected to the Senate in 2012.

After making their way inside, the crowd remained enthusiastic albeit impatient as the hour for the beginning of the event came and went. Many chanted and engaged in lively cheering like one would find at any Gator or Seminole football game! Others discussed the seriousness of the nation’s problems and the importance of the coming election for the future of our nation.

When Senator Cruz was introduced the cheering of the audience was so loud that you could not even hear Hannity! Some exuberant supporters continued their cheers and shouts well into the interview which was annoying at best and not in keeping with the dignity and decorum maintained by Senator Cruz who was later joined on stage by Carly Fiorina.

The program, scheduled to air on Friday night at 10 p.m. was not aired due to breaking news story. It was broadcast on Sunday, March 13 at 9 p.m. 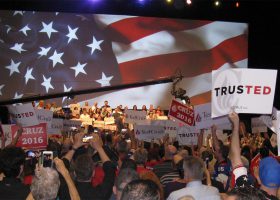 Wide shot of the town hall event with Ted Cruz, Carly Fiorina and Sean Hannity showing the camera boom over the audience.... 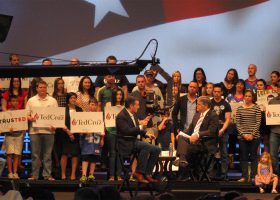 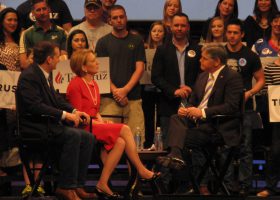 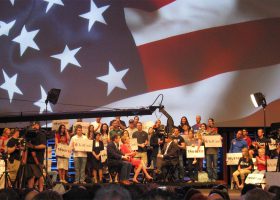 Photo taken showing the camera boom extending over the audience. 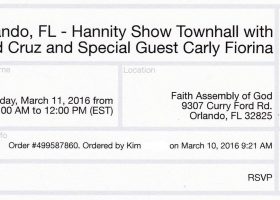