A proposal for the addition of a Bookmobile was presented to the board of the Albertson Public Library by the Orange County Chamber of Commerce in early 1949. The ladies of the Orlando Sorosis Club decided that a Bookmobile that would take books to people in the small communities of Orange County was a worthy venture. They spearheaded  a drive to raise $6,000 for the purchase of the vehicle, the Board of County Commissioners appropriated $10,000 for the staffing, books, and upkeep of the vehicle, and by November 1949 it was on the road. 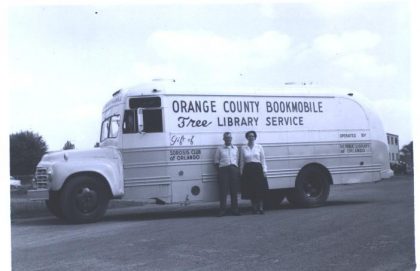 The president of the Friends of the Library of Orlando, Ruth McCullough Maguire, published the “Notice of Intent to introduce local act” in the Orlando newspaper on the 20th day of April, 1949. John Fleming penned a humorous editorial about the proposed bookmobile and how the Sorosis ladies would secure the funds in his “Not Quite News” column.

Excerpts from a front page story in the Winter Garden Times circa October 1949:

The Orange County Bookmobile, which will provide free library books to the citizens of Orange County as an extension of library service from the Albertson Public Library in Orlando, will go into service in the county on or about November 15, Mrs. A. H. Smith Jr., of Orlando, chairman of the Sorosis Club’s Bookmobile project, announced yesterday….

The Bookmobile, with a capacity of over 2,000 volumes, will be presented to the Public Library by the Sorosis Club of Orlando…. The Bookmobile will follow a regular schedule which will take it to certain designated stops every day of the week. Citizens will have library cards and may draw books from the bookmobile stock just as residents of Orlando make use of the facilities of the city library. The book stock on the Bookmobile [will include] late books of fiction and general interest, reference books, historical books and children’s books.

The Orange County Commissioners included $10,000 in the 1949-1950 budget for the maintenance of the Bookmobile, being convinced that the value of this service to the citizens of the county would far exceed this sum. Maintenance will include salary of the Bookmobile staff librarian, the driver, the books with which it is stocked and the replacements, gas and oil and repairs and other items. 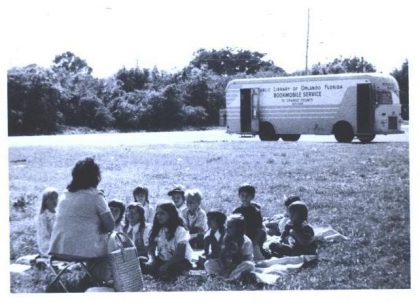 When Sorosis voted to buy the Bookmobile for the county, the club believed that no other single service would benefit the entire community to a greater extent. Every member of the club  contributed time and money in raising the $6,000 necessary to pay for the equipment.

The Bookmobile, an all steel custom-built body from the Wayne Bus Company of Indiana, is mounted on a Studebaker chassis…. The interior of the Bookmobile is being built in Jacksonville by the Rivers Body Factory, from specifications furnished by the Sorosis Club and the Albertson Public Library.

Peruse the photos and articles below under Attachments. 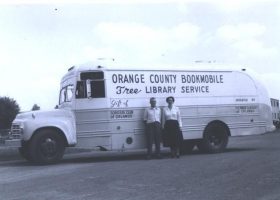 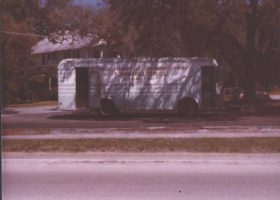 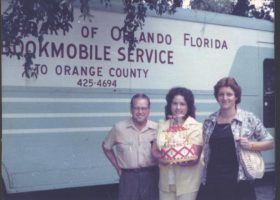 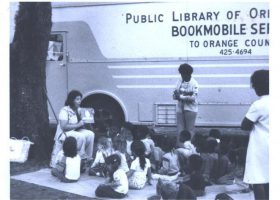 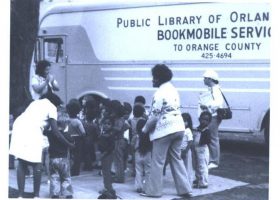 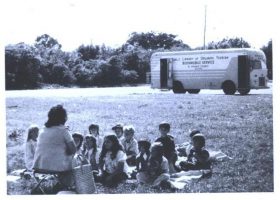 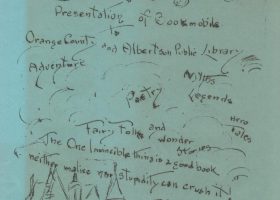 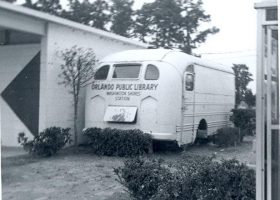 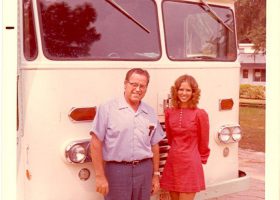 Plans for a traveling library service to give outlying districts books is under consideration by the Orange County Chamber of Commerce board...

Article published in the Orlando Morning Sentinel, April 20, 1949, p. 20, reports that the Orange County board members agreed to appropriate...

Article published in the Orlando Evening Star on September 8, 1949 announcing that the contract for the interior of the Bookmobile had...

President of the Friends of the Library of Orlando, Ruth McCullough Maguire, authorized the publication of the Notice of Intent to Introduce...

Not Quite News by John Fleming - Bookmobile commentary

The subject of this undated copy of the Not Quite News column by John Fleming focused on the  bill authorizing  the Orange...

Information on the history of the Bookmobile and shut in service provided by the Albertson Public Library / Orlando Public Library. The original bookmobile was set up in Washington Shores as a Library Station when it was no longer road worthy.