The Citrus Council of Girl Scouts here in Central Florida was formed in the 1950s.

In the 1970s, a group of Junior Girl Scouts met at a little white concrete block church located at 1901 West Oak Ridge Road called West Oak Ridge Christian Church. It was just west of the Weatherly Apartments near the intersection of South Orange Blossom Trail.

The photograph above was taken in the church social hall where the girls met each week.

The attached lyrics to the Moss Park song, are sung to the tune of “They Say That In The Army….”. The song was created by girl scout leaders as we often camped out at Moss Park. 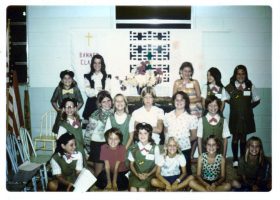 Photograph is of a Junior Girl Scout Troop that met at a small white concrete block church at 1901 West Oak Ridge...

My Junior Girl Scout Troop that met at the West Oak Ridge Christian Church in the early 1970s had some outings at Moss Park. We adapted a well known "Army" song to our needs. These are the lyrics that we copied for all the girls so we could sing around campfires.

VERSE 1:
They say at Moss Park the food is mighty fine,
A pea rolled off the table and killed a friend of mine.

VERSE 3
They say at Moss Park the waters mighty fine.
If you can't swim in it, you'll drown in all the slime.

VERSE 4
They say at Moss Park the counselers are mighty fine.
They look like Betty Grable and act like Frankenstein.