The Orlando Rebels Ladies Softball Team was found in 1954. This 1969 program features photos of the team members, their bios and advertisements from local businesses that have faded with time. Peruse all the images and documents under Attachments at the bottom of this post.

The Orlando Rebels were organized by Marge Ricker in 1954 and have been under her management ever since. In their early years, the Rebels played a limited schedule against mostly local competition. Gradually the team expanded its field of operation to reach its present scope. Today the Rebels play a regular season schedule of close to eighty games against teams from all over the nation.

Over the years the Rebels have won 489 regular season games while losing 193 – an average of 7 wins for every 10 games played while competing against many of the nation’s top teams.

This season the Rebels will compete in the newly organized Atlantic Coast Women’s League along with the perennial National Champions Raybestos Brakettes, Glennettes of Perkasie, Pennsylvania, Johnnys of Baltimore, and Schaeferettes of North Plainfield, New Jersey.

In addition to their regular season, the Rebels meet the Half Century Men’s Club every other Sunday afternoon during the winter and early spring. These games, played in St. Petersburg, are witnessed by thousands of fans . . . many of those fans are winter visitors representing nearly every state in the United States, plus several foreign countries.

During the 1968-69 winter season the Rebels had an unprecedented undefeated record — a feat never before accomplished by any girls’ team against the Half Century Club.

The Rebels are a close knit group with great team spirit. Every member of the team devotes many hours to practice and games. Their dedication to the game and to the team is reflected in the team’s record and performance. While the Rebels are justifiably proud of the number of individual honors that they have been accorded its members, it is in their strength as a TEAM that they take THEIR GREATEST PRIDE.

Sad note…Pat Walker passed away this morning, December 8, 2020. She was always a hero…on and off the field and was loved by many. She will be missed.
Ann Gawthrop, Niece

Advertisements for the Skyline Restaurants located at the McCoy Jet Port (later became an international airport) and the Herndon Municipal Airport or... 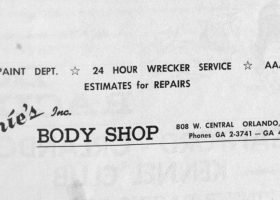 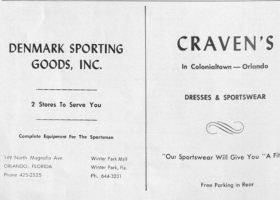 Advertisements featured in the 1969 Orlando Rebels Souvenir Program. Craven's dresses and Sportswear in Colonialtown - Orlando. "Our Sportswear will g... 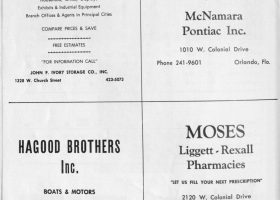 Sissie Zollinger Upon her graduation from Memphis State in 1967, Sissie decided that Central Florida area would be a good place to begin...

Stephany Tenney Stephany joined the Rebels in the 1968 season and is well-known for her fine plays and inexhaustible energy. Defensively she is...

TONI SWARTOUT Toni broke into the Rebel line up as a 15 year old rookie in 1960 and has been a regular ever...

PAT WALKER A lifetime average of .312, holder of the team record for most stolen bases in a season, eight times All State,...

ERNIE RINKS At the conclusion of the 1967 season, Ernie retired after five seasons with the Rebels. One season of inactivity was enough...

JEANNIE PELLAGATTO Consistent dependability has marked Jeannie's play since she joined the Rebel team in 1968. Finishing that season with a respectabl...

JEAN DAVES For many seasons Jean display outstanding ability while pitching for various teams in the Southeast ... mostly in Atlanta ... but...

CATHY GIBBONS Although in her fourth season of play with the  Rebels, seventeen year old Cathy is still the "baby" of the team....

DARLENE MAY - Darlene May should be know to fans of softball, although California was her playing ground before she joined the...

MARGE RICKER - Small wonder that when it comes to softball in general and the Rebels in particular that Rebel manager Marge...

Orlando Rebels 1969 program complete with photos and bios of the players.