Information below was provided by Jake Thorn who lives in Northern Illinois on 20 June 2010.

Netta Elkins is listed in the 1935 Florida Census in Orlando at 30 West Central, which appears to be a Hotel. She seems to be a housekeeper at the age of 60, but would be more like 68 if she is the person I’m seeking.

She is listed in the Florida Death Index as Annetta Elkins living on Pine Street in Orlando and is listed at age 72, born in Illinois, died 25 August 1938 in Orlando. She is buried two days later in Abingdon, Illinois, which is close to where she is actually buried.

Here is the obituary which was published in the Orlando Morning Sentinel on 27 August 1971, page Two.

Mrs. Anetta Elkin, 72, passed away suddenly Wednesday [August 25, 1971] night at her home here. The body was forwarded to her former home in Abingdon, Ill., for funeral services and interment.

Mrs. Elkin is survived by one son, Major M. K. Gillette of Fort Knox, Ky., and one sister, Mrs. Phoebe Clem of Roseville, Ill. Arrangements were in charge of Eiselstein Wiggenton Funeral Home.

The surviving son, Maj. M. K. Gillette, is buried at Arlington National Cemetery, in Washington D.C. His name is actually Melvin E. Gillette and he was a pioneer in the U. S. Army’s Film Making efforts, so he had some renown. Anneta had three other kids that passed on before her. 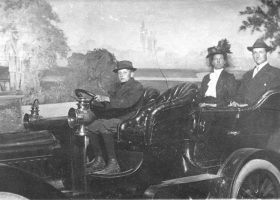