Mr. Carl Raymond Davis, 73, 20 Huntington Place, a retired U.S. Army Colonel, died Tuesday. A native of Ohio, Col. Davis served in World War I as a sergeant in the 145th Infantry, 37th Division, Ohio National Guard. He was awarded the Purple Heart after being wounded in France. After the war he became an officer in the 145th in Cleveland, Ohio. During World War II he served in the Transportation Corps at the ports of Boston and New Orleans and finally with the oversea supply branch of the port of San Francisco at Fort Mason, rising to the rank of lieutenant colonel. Relieved of active duty in 1947 due to a service connected disability, he became an official of the Cleveland Recreation Department until his retirement in 1955. He was active in the American Legion of which he was a lifetime member and the Military Order of the World Wars and became a member of the Central Florida Chapter, Retired Officers Association and the Stag Club of Winter Park after moving here in 1955. He was a Congregationalist. Survivors: widow, Evelyn G., Winter Park, and brother, Clarence, New London, Ohio. Fairchild Funeral Home.

Col. Carl Raymond Davis (Ret.) U.S. Army – Funeral services for Col. Carl R. Davis, 73, 820 Huntington Place, who passed away Tuesday, will be held Friday afternoon at 2:00 p.m. from the Chapel of Fairchild Funeral Home with a U.S. Army Chaplain officiating. Full military honors will be held at the graveside in Woodlawn Memorial Park…. 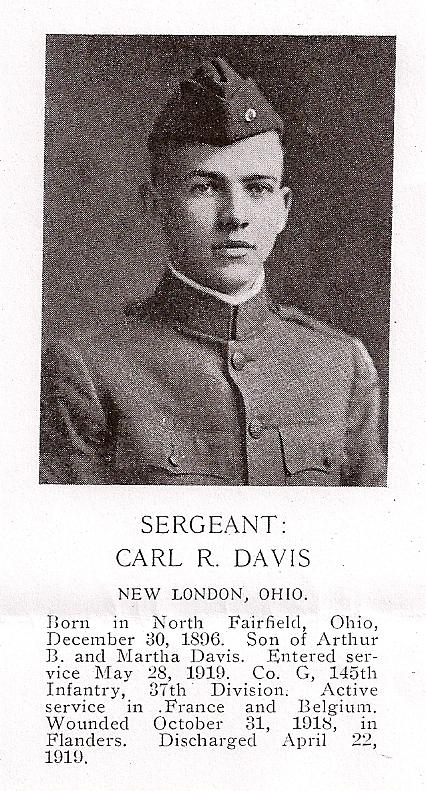 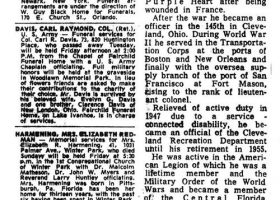 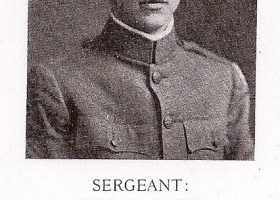 The source for this image the Honor Roll of Ohio, Huron County Edition, An Illustrated Biographical History Compiled from Public and Private...