Originally from New York City, Miss Hall enjoys living in Orlando and especially St. James Cathedral as she says, “The priests are a delight”. In this interview she shares her memory of meeting Music Director Bob Schaefer for the first time when she inquired about joining the St. James Choir. She still sings in the choir as a soprano and her daughter, Valerie Hall, serves as a cantor.

When asked what she treasures most about our community, she replies, “I treasure coming to church… I can’t tell you how much coming to a beautiful church means to me. Belonging to whatever church you go to is an inspiration.”

Edith I. Hall, Edie, of Orlando, Florida passed away on Saturday, June 26, 2020, the feast of Our Lady of Perpetual Help. She was born on February 22, 1921, in Philadelphia, Pennsylvania, and grew up in New York City, New York – her hometown. She was preceded in death by her father, Vito Guglielmi, her mother, Rosa Eretta, and her husband William Robert Hall. She is survived by her daughter, Valerie Hall.

Edie was born in Philadelphia as a first generation American. Her parents immigrated to the United States from Italy. When Edie was very young, her parents moved to New York City to work in the garment industry. Edie quickly caught the spirit and rhythm of the City.

At the French Convent School where she spent her younger years, she added French as a second language to her original Italian. She also developed a strong hatred of French Onion Soup and when the nuns were not looking, used to pour it in an unsuspecting plant. She did, however develop a great love of hot chocolate and to her last, that favorite French Convent taste could never be matched even with the best American and Dutch Chocolates.

When she headed to public school, she knew no English but quickly learned. As she grew, she also developed a love of Opera and the Musical Theater. Her father, Vito, played the mandolin and sang at parties and weddings. He inspired her to sing which she loved. Her mother, Rosa, had a reputation as a fantastic cook, and there were often late night parties at their apartment attended by musicians from the Metropolitan Opera and the Broadway stage who came to eat and sing for their late night supper.

In her young adult years, she loved dancing the night away with her friends to the Big Band sounds. One of her most cherished memories was listening to Frank Sinatra sing, performing with the big bands. He was always her favorite and she never missed a chance to hear him sing “New York, New York,” her favorite popular song. She even danced with Ole Blue Eyes one time. She remembers dating someone she refers to as “The Gangster” – he must have been the Sinatra connection.

During World War II, she worked as a translator for the government transcribing documents obtained through national security means from Italian to English. She and her girlfriends and cousins wanted to contribute to the war effort and they were all thrilled to be “spies” for the USA. She also volunteered at the USO where she got to listen and dance to Big Bands such as Benny Goodman, Duke Ellington, Tommy Dorsey, and Glenn Miller with such renowned singers as Ella Fitzgerald and The Andrews Sisters and of course Frank Sinatra. Edie did appear in several plays in NYC. She was particularly proud of being in a production of “The Women” with Lynne Fontaine.

Edie moved to Jacksonville Florida in 1946 with her new husband William Robert Hall. Here they started a short order/ice cream shop called the Polar Bear. After a few years, they sold the business and Edie attended cosmetology school opening an in-home beauty shop. Edie stayed involved in theater, performing and directing at Theater Jacksonville and The Case Theatre. Edie was also very involved with Holy Rosary Catholic Church working with the Liturgy Commission, the Women’s Group, the Parish Council and Bingo Nights. She also served several terms as President of the Forest-Dale Women’s Club.

By 1997, she had retired and moved with her daughter, Valerie, to Orlando for Valerie’s career. She stayed active at St. James Catholic Cathedral in the choir, Friends of the Music Ministry, and Prime Timers. She also served as a Lector and Eucharistic Minister. She performed in several of the Friends’ performances at their annual dinners. She also took care of the family dogs. She used to say her days sometimes consisted of let the dog out, let the dog in, but she loved them dearly. One of her final requests was their ashes be in her coffin with her, and they will be there just as she requested. Even Valerie’s favorite dog, Snooky, is going with Edie.

She never lost her interest in music and theater. Some of her favorite entertainers later in life were Andrea Bocelli, Lady Gaga and to everybody’s amusement Stephen Tyler and Aerosmith. She loved the Orlando Symphony Pops season, especially the Holiday Concert. Her favorite aria was Vissi D’arte from Puccini’s Tosca, which in her younger days, as a coloratura, she sang beautifully.

When writing this, I asked some friends what they thought I should include. There was a story she told often to our extended family, about having a pet snake. She used to keep it in a small aquarium in her room. One day it escaped and her mother saw it crawling along the kitchen counter. The snake went flying out the window never to be seen again. Edie says she thinks it probably landed on some poor gentleman’s hat and probably scared the life out of the guy.

In her life, she also donated to many charities. Her favorite causes involved the support of animals. The one she was most devoted to was Guide Dogs for the Blind. 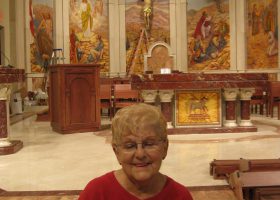 Originally from New York City, Miss Hall enjoys living in Orlando and especially St. James Cathedral as she says, "The priests are a delight".

In this interview she shares   her memory of  meeting Music Director Bob Schaefer for the first time when she  inquired about joining the St. James Choir. She still sings in the choir as a soprano and her daughter, Valerie Hall,  serves as a cantor.  When asked what she treasures most about our community, she replied, "I treasure coming to church... I can't tell you how much coming to a beautiful church means to me. Belonging to whatever church you go to is an inspiration."