It was due to the efforts of Father Lyons that All Souls Catholic School was organized. The image below is an All Souls Catholic School diploma to member of the second class to graduate the ninth grade. The graduates included Joy Brueggeman, Nancy Filegar, Francis Gurucharri, John Kennedy, Paula Markham, Charles Oravetz, Stephen Powell, Fred Teslo, William Wight. Text: This Diploma is awarded to Frederick Paul Teslo for having completed in a satisfactory manner the prescribed course of study for the Ninth Grade of All Souls School, Sanford, Florida June 9, 1957. Sister M. Veronita, Principal; Rev. Richard Lyons, Pastor.

An article published in The Florida Catholic on July 3, 1959, p.1, heralding the ground breaking for the school addition at All Souls Catholic School just five years after opening in 1954. God Bless these nuns – can you imagine wearing those full length habits in the middle of SUMMER in Florida!

The article accompanying the photo reads as follows:  All Souls to Add Four Classrooms At Sanford School.
SANFORD — Members of All Souls parish here have attended the groundbreaking for their parish school addition, Father Richard J. Lyons said this week. The building, expected to be completed in September, will have four classrooms, principal’s office, a clinic, a kitchen and a separate auditorium. Designed with the future in mind, the school will eventually be a two-story building, he said. He blessed the ground and turned the first shovelful of sand, after which he invited the men present to participate in the groundbreaking, as a feature of the Father’s Day ceremony. Sisters of Christian Charity of Mendham, New Jersey, who staff All Souls School, also took part in the groundbreaking.

CAPTION: GROUND IS BROKEN FOR A SCHOOL ADDITION IN SANFORD. Parishioners of All Souls Church, Sanford, join Father Richard J. Lyons and Sisters of Christian Charity at the ground-breaking for a school addition. Above, Sister Veronita prepares to turn a spade full of earth.

Father Lyons celebrated his 35th Anniversary in the Priesthood in May 1961 while the pastor at All Souls Catholic Church. 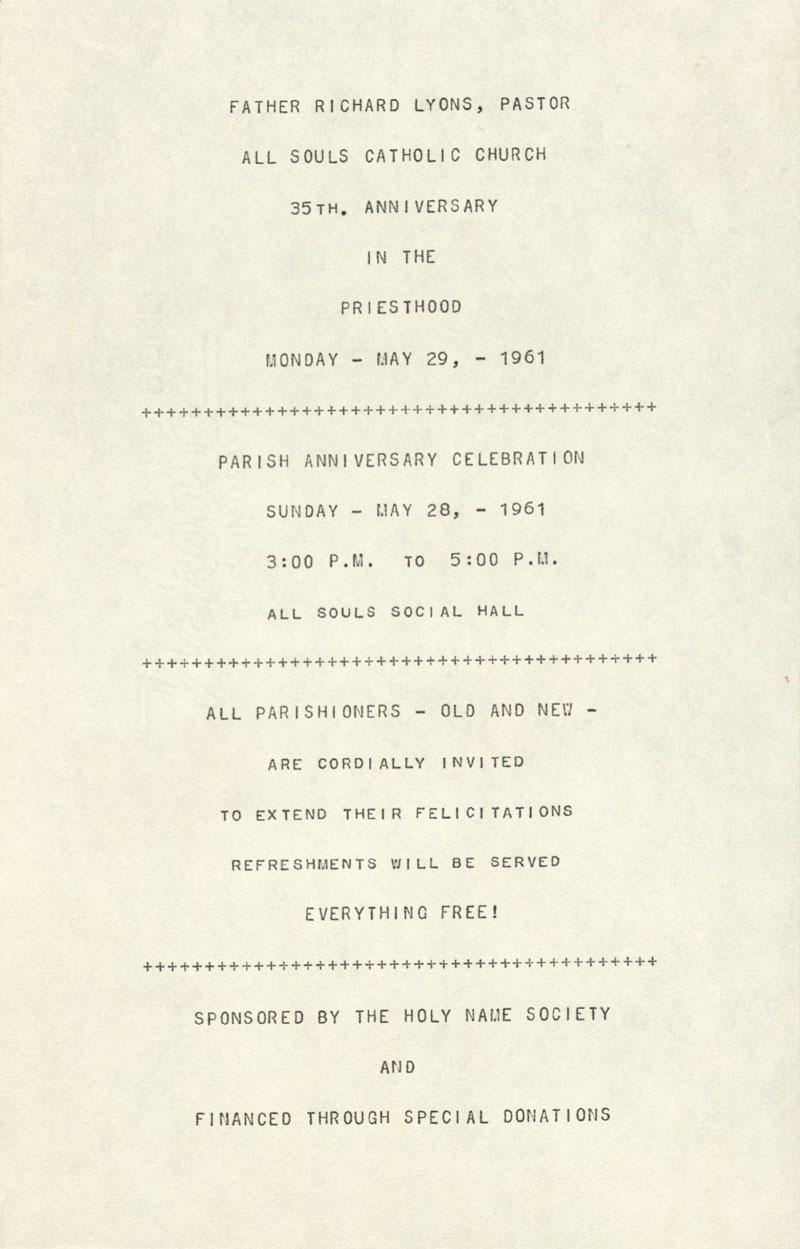 ABOVE: This is a special insert in the May 28, 1961 All Souls Catholic Church Sunday Bulletin, announcing a celebration to commemorate Father Richard Lyons ordination to the priesthood on May 29, 1926. The event was sponsored by the Holy Name Society and held in the Social Hall. Read about the celebration!

Father Lyons retired to Palestine, Illinois after leaving All Souls in 1965 but returned to live in New Smyrna Beach in February 1969. Father Lyons delivered the principal address to the eighth grade graduating class at All Souls Catholic School on Thursday, May 29, 1969, the 43rd anniversary of his ordination.

It was a shock to all when he died just four days later on June 2, 1969, at Mercy Medical Center in Orlando, after emergency surgery for a blood clot in his abdomen.

Funeral services for Father Lyons were conducted on Friday, June 6, 1969 at All Souls Catholic Church and he was buried at All Souls Catholic Cemetery. Father William T. Keane’s recently discovered eulogy notes follow. It is not known if the eulogy was delivered as written, but the sentiments expressed were shared by all who knew him.

“Behold my servant whom I have chosen, my beloved in whom my soul is well pleased: I will put my spirit upon him, and he will declare judgement to the gentiles … a bruised reed he will not break and a smoking wick he will not quench.”

My dear friends in Christ: This morning just as we have celebrated other events in the life of our former pastor, priest, father and friend, we meet to celebrate the final eternal reward God has given to Father Richard Lyons and to pay our tribute to him.

Father Lyons was born in Chicago, Illinois on August 9th, 1901. He studied at the Divine Word seminary in Techny and was ordained a priest there on May 29th, 1926. For the next 16 years he worked as a member of the Society of the Divine Word in various missions in the Philippines, as a hospital chaplain in Illinois, teacher in Boston and in Greenville, Mississippi. He came to Jacksonville in 1942 as an assistant to Monsignor Meehan at Immaculate Conception Church in Jacksonville. He joined the St. Augustine Diocese in 1951, was appointed pastor in Starke in the same year, and came to Sanford as pastor of All Souls Church in 1952. He retired in 1965 and died on June 2nd, 1969.

These brief details tell us little about the priest we knew. The words of the prophet Isaias have always seemed to me to sum up in some way the goals and achievements of Fr. Lyons as a priest, an indication of how effectively he modelled himself on the Messiah they describe.

While his devoted love for the whole people of God, his compassion for sinners, his kind fatherly counsel for those in trouble and his gentle humour endeared him to everyone, two things especially stand out: his care for the shut-ins and his love for children. Whether he was dealing with the prisoners in Raiford as pastor of Starke or with those confined by illness in home or hospital, he displayed the same dedicated love and service in visiting them, counselling them and comforting them. Even in retirement he spent two years caring for the infirmed as chaplain at St. Joseph’s Home in Palatine. When he died, among his papers were letters from shut-in members of the Catholic Union of the Sick with whom he corresponded.

His concern for the children of the parish has an enduring monument in the parish school which he opened within two years of coming to Sanford. Fittingly his final visit to this parish was to talk to this years graduation class at All Souls School last Thursday.

Also dear to the heart of Father Lyons was the loving and reverent remembrance of our departed relatives and friends. He renovated and improved the parish cemetery where his body will now rest until it is called to take its place in glory on the last day.

Each one of us can recall acts of personal kindness from Fr. Lyons. Yet, while we miss him, we do not mourn him. We realise that he served our divine master faithfully and fully in his life and that he has shared in Christ’s death so that he might share in his resurrection and glory. He has taught us to see death as a checkpoint to eternal life, as the achievement of the eternal crown which God has laid up for him. We apply to him the words of the Book of Wisdom: “He pleased God and was beloved and living among sinners he was translated”.

Our love will incite us to imitate those virtues which he practiced and preached, charity, compassion and service to all of God’s children, fidelity to God’s church and a personal living of each day in the presence of the God with whom our friend is now eternally happy.

All Souls Catholic School diploma to member of the second class to graduate the ninth grade. The graduates included Joy Brueggeman, Nancy... 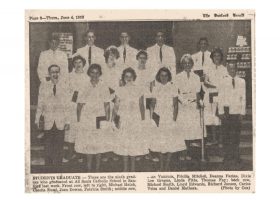 Students graduating from ninth grade at All Souls Catholic School in Sanford, Florida are featured in the Thursday, June 4, 1959 edition...

Photograph and article published in The Florida Catholic on July 3, 1959, p.1, heralding the ground breaking for the school addition at... 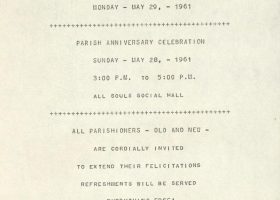 This is a special insert in the May 28, 1961 All Souls Catholic Church Sunday Bulletin, announcing a celebration to commemorate Father...

Father Richard Lyons, All Souls pastor who made the dream of having a Catholic School at All Souls a reality, celebrated his...

Includes information on Father Richard Lyons 30th Anniversary as a Catholic Priest and the surprise celebration hosted by the Parishioners.

Includes information about the planning for the Winter Festival.

Includes information on the School Bus and Scouting.

Includes information on Scouting and the Mother General visiting her Sisters who taught at All Souls Catholic School.

The first All Souls Catholic Church was burned down on January 25, 1932. As unbelievable as it may seem, someone tried to burn down the second church on September 30, 1962 - 30 years later. This newspaper article from the Sanford Herald, published October 1, 1962 on the front page, gives details and a photograph. There is a transcription of the article at the end of the document as it is very difficult to read due to the condition of the image on the original microfilm.

The October 7, 1962 Sunday Bulletin had this announcement regarding the fire:

By now all of your know about the fire that burnt out the vestibule of our Church last Sunday evening, and damaged the rest of the interior by smoke. We have no definite information how the fire started, except that it was no accident. By very good fortune it was discovered soon, so that much greater damage would have resulted. We owe a great debt of gratitude to Mrs. Toth who came to visit the Church at the most opportune moment and gave the alarm. All damage is fully covered by insurance, and work of cleaning and restoring has already begun. So many have asked how they could help. For the present, your regular Sunday contributions will be the most acceptable way. Later some particular items needed, will be mentioned and your kind help solicited. Thank you for the many wonderful expressions of sympathy, the prayers and tears we all shared together! These more than anything, are precious fruits of a bond of kindness and charity among us that is overwhelming. God Bless All of You!