The Lyman Twins – Herbert and Howard Lyman – famous vaudevillians settled in Central Florida in 1913. Lyman High School was named for one of the brothers due to the contribution he and his wife made to the Longwood / Altamonte Springs communities.

Herbert Lucius Lyman died on 4 July 1953 in Daytona Beach, Florida while visiting the city – 30 years after his brother Howard C. Lyman who died on 7 July 1923 while visiting the beach at Passagrille, Florida. He is buried in Greenwood Cemetery, Section L, lot 12-5. Herbert Lucius Lyman and his sister in law Emma Abbott Lyman are listed as the co-owners of the cemetery plots, purchased on 18 July 1923 apparently at the time of his brothers untimely death.

Central Florida Memory includes a newspaper article about Mr. and Mrs. Herbert Lyman participating in an Elks Club Minstrel in 1927 and numerous other items of interest. Find these by searching for “Lyman”. 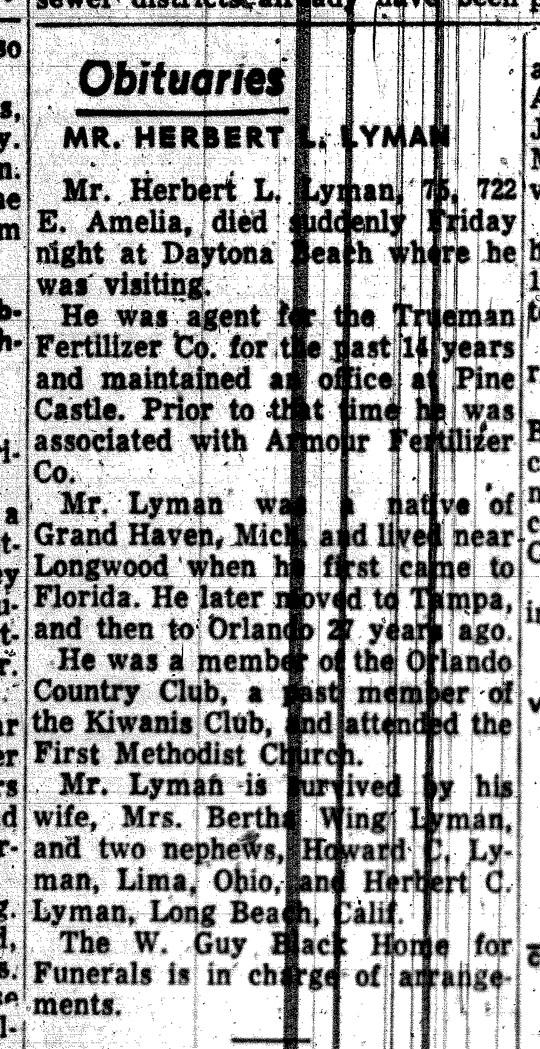 Kevin Scott Collier, Art Director for the Grand Haven Tribune newspaper in Grand Haven, Michigan and writer of Christian children’s books, is writing a book about the Lyman Twins. This is part of an email he sent about the Lymans and his book in April 2011:

Herbert and Howard Lyman (and their wives Patti and Emma) loved Florida. The twins got into vaudeville stage performing just before they turned age 20, and while they first went to New York, they lived the southern coast…. These fellas were a HUGE nationwide sensation, I kid you not. They retired from stage in 1911, but if they had been born 15 years later, they’d been in films competing with The Marx Brothers and Charlie Chaplin. As I got into my research months ago I was shocked to see the ONLY real memorial to a “Lyman” was the [high] school there [on Ronald Reagan Blvd. in Longwood]. There’s nothing here, and they grew up here, their father was a famous Captain here. They spent summers here right until close to 1920 when I believe the brothers sold their cottage in Spring Lake, a few miles from here over the bridge.

Herbert almost killed a kid on his way to being a stage star. Herbert and Howard along with other Grand Haven, MI boys used to stage plays in a barn behind Brandstetter’s hardware store and in one play in April 1891 Herbert (playing a wild west lawman) was supposed to shoot “the bad guy” played by Johnny Brandstetter. All these kids were 10-13 years in age. They used a real gun, but some kid forgot to load it with blanks, and Herman shot Johnny… luckily, it was a graze across the forehead… but the barn was full of an audience of kids who ran out of the barn screaming for their lives. This article is included in my book, too.

CHECK out IMAGES and DOCUMENTS below. 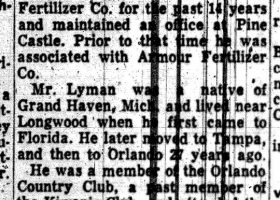 The obituary for Herbert Lucius Lyman was published in the Orlando Morning Sentinel on 5 July 1953, page B7, column 2. Herbert... 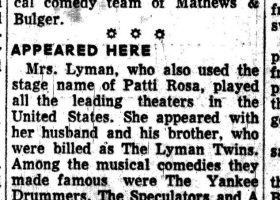 Mrs. Herbert Lyman - Patti Louise Rosa - Died on 31 January 1952. A story about her death and life was published... 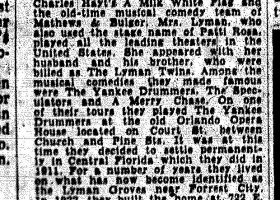 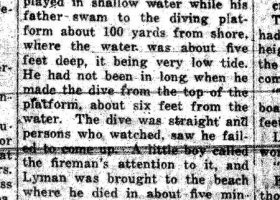 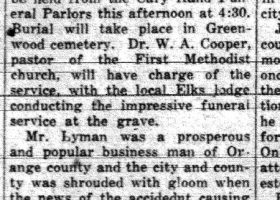 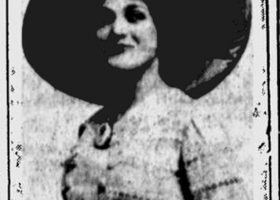 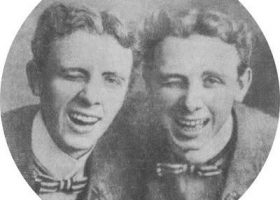 Herbert and Herman Lyman from an advertisement in a Kentucky newspaper, 1904

The obituary for Emma Abbott Lyman was published in the Orlando Reporter Star on 14 August 1943, page 2, columns 5 and 6. Emma died on 13 Aguust 1943 and is buried in GreenWood Cemetery Section L, Lot 12-3. Emma Abbott Lyman (wife of Howard Charles Lyman) and  her brother in law Herbert Lucius Lyman apparantly bought the plots on 18 July 1923, around the time of Howard Lyman's untimely death in 1923.

1910 Census of Spring Lake Township, Ottawa County, Michigan.
It shows Howard Lyman married to someone named Ethel and it shows they have been married 7 years and have one child.
The child is not with them. The child may be the daughter Charlotte listed on the 1920 census at age 18.

They are living with Ethel's mother, Mary Buckingham, as Howard's relationship is Son in Law.  The occupations of both Lyman brothers, their wives and the mother in law is listed as Actor / Theatrical.