Astronaut John Young passed away on January 5, 2018 in Houston, Texas, but will forever be a cherished Orlandoan. Read the tribute created by NASA.

Born in San Francisco, California, on September 24, 1930, John Watts Young received a bachelor’s of science degree in aeronautical engineering from Georgia Institute of Technology in 1952. Following graduation, Young joined the U.S. Navy. After receiving flight training, he was assigned to a fighter squadron. In 1959, after passing test pilot training, Young was assigned to the Naval Air Test Center and set time-to-climb records. He retired from the Navy in 1976.

In 1962, the National Aeronautics and Space Administration (NASA) selected Young as an astronaut candidate. On March 23, 1965, he flew on Gemini 3 (the first piloted Gemini mission), and he was on Gemini 10 in 1966. In 1969, Young operated the command module of Apollo 10 during its dual rendezvous with two Agena satellites and, in 1972, he was in command of the Apollo 16 mission to the Descartes Highlands on the Moon.

Young is singled out for being the only American astronaut to have piloted four different classes of spacecraft: Gemini spacecraft, Apollo (command module), Apollo (lunar module), and space shuttle.

In 1973, Young became chief of the Space Shuttle Branch of the Astronaut Office. A year later, he was chosen to be chief of the Astronaut Office. He was the associate director (technical) at Johnson Space Center in Houston, Texas. He was awarded the Congressional Space Medal of Honor, in 1981, inducted into the U.S. Astronaut Hall of Fame, in 1993, and awarded the National Space Trophy, in 2000. After 42 years with NASA, Young retired from NASA at the end of 2004.

Click on the links below for articles about John Young from the Orlando Sentinel and photos of John Young as a Junior at Orlando Senior High School in the 1947 Tigando yearbook. 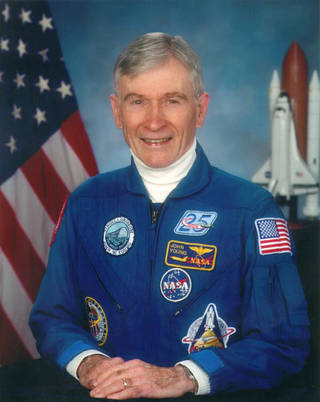 Listen below as George Williston shares some of the memorable stories of living in the John Young House at the College Park Historical Committee meeting on February 25, 2013 and view photos. 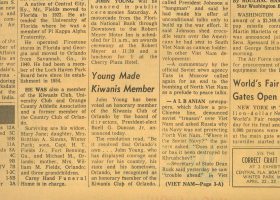 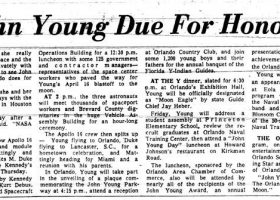 Article from the Orlando entinel  24 May 1972, page 3B. Astronaut John Young Due For Honors - Filled Days. 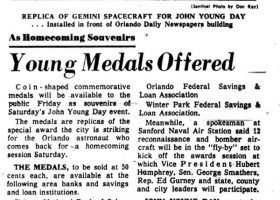