Robert Serros is an Orlando native and has been a member of St. James Church all his life. His wife Carolyn became a member after moving to Orlando from New Orleans in the 1960’s.

Mr. and Mrs. Serros and family attended the “Sneak Preview” of the restored Cathedral on November 13th, 2010.

Read more about Dr. Serros and his family. 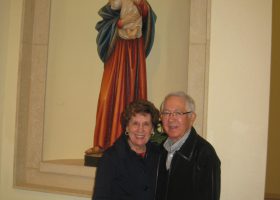