The Hyer brothers were Orlando pioneers. Property records at the Orange County Comptroller’s office show that Alexander Means Hyer and his wife Mattie Hyer were here as early as 1876 when they sold 80 acres in Orange County on March 3rd for $450 dollars; his brother E.P. Hyer acting as a witness. By all accounts the Hyers were upstanding citizens and members of the First Methodist church on Jackson Street or the First Presbyterian Church. That being said, the Saint James Cathedral 1885-1985 centennial publication identifies A. M. [Alexander Means] Hyer and E. P. [Edward Pringle] Hyers [sic] as benefactors who contributed to the construction of church in 1887. A.M. Hyer served as Orlando’s fourth mayor (1879-1880) and R.L. Hyer was active in city government, as well.

Letters written to Hatabel and Edna Hyer (daughters of Edward Pringle Hyer) from 1903-1905 show that Lillian Hyer suffered from a multitude of illnesses including scarlet fever and chronic ear infections that resulted in deafness. Lillian died from typhoid fever at the age of 17 in 1911 while visiting her uncle over the Christmas holidays in Ft. Valley, Georgia. Lillian’s obituary was published in the Orlando Report Star, 18 January 1911.

MISS HYER DIES OF FEVER.
A message was received here Monday morning from Mr. R. L. Hyer, who with Mrs. Hyer, was called to the bedside of their daughter, Miss Lillian, at Fort Valley, Ga., who had been seriously ill for several weeks, announcing her death last evening at 10 o’clock. Miss Hyer has been in attendance on a college at LaGrange [Georgia] for the past term, going to Fort Valley at the beginning of the Christmas holidays to be with her uncle and family during her vacation from school. Very soon after arriving at Fort Valley she was stricken with typhoid fever, her father being telegraphed for and has remained at her bedside since. Mrs. Hyer arrived only a few hours before her death.
The sorrowing parents will arrive from Georgia with the remains tomorrow afternoon at 3:20, over the A. C. L.* Undertaker Hand having been notified to meet that train, and arrangements for the funeral will be made later. Miss Lillian Hyer was a charming young lady, a fine Christian character and one of the most popular young ladies this city has possessed and will be greatly missed by her many friends and acquaintances. The sympathy of the entire community is extended to the sorrowing parents who are bowed down with grief over the loss of this splendid daughter.

* Miller’s Orlando City Directory, February 1907, p.16, identifies A.C.L. as Atlantic Coast Line Railway. The passenger station was located at the corner of Church street and south Gertrude Avenue and the freight depot was at south Gertrude Avenue at the foot of Jackson Street. You can imagine Lillian’s father and step-mother accompanying her coffin back to Florida and standing on the platform as it was unloaded from the train.

Robert Lee Hyer died 18 September 1950. There was no obituary but his passing was featured on the front page of the Orlando Sentinel.

Rites Arranged For Mr. Hyer
Funeral services for Mr. Robert Lee Hyer, 88, of 152 E., Jackson St., one of Orlando’s best known pioneer residents, will be held Saturday at 4 p.m. at the First Presbyterian Church of which he was an elder.
Dr. Marshall C. Dendy, pastor will officiate and interment will follow in Greenwood Cemetery. The body will lie in state from 2 to 4 p.m. in the church.  Mr. Hyer, ill for several months died in a local hospital early Friday.
He was born in Covington, Ga., Jan. 10, 1862, the son of Thomas Farr Hyer and Martha Caroline Stewart. In the early 1870s Hyer and three brothers settled in Orlando. He engaged in the cattle business and owned the Southport Cattle Co. in Kissimmee until its sale after World War I.
He erected a stable where the Magruder Arcade is now located and in 1892 he bought the stable of Foster and Reel at the corner of Orange and Central, where the Yowell-Drew-Ivey Store now stands. He sold out about 1912 and went into the banking and real estate business.
He was vice president of the Orlando Bank and Trust Co. and president of the Church St. Bank. He also was a member of City Council, serving five terms from 1898 to 1910.
Mr. Hyer and W. M. Davis Sr. had extensive real estate holdings here, including the Hyer and Davis Bldg. which they bought early in the 1900’s. he owned a great amount of business property at the time of his death.
He was married twice, in 1889 to Hennie Brown of Covington, and, after her death, in 1906 to Mary Graves Rinaldi, who survives him, along with a son by his first wife, Robert Lee Hyer, Jr. of Frankfort, Ky.
Active pallbearers will be Joseph Guernsey, Sr., Chas G. Magrader, Ted Kissam, Donald Lee, W. M. Davis, Jr., Harold Carter of Ocala and Donald Walker.
Honorary pallbearers include W. M. Davis, Sr., Dan Raybon, S. Y. Way, B. E. Purcell, Herbert Smith, Eugene Schenker, and deacons and elders of the First Presbyterian Church.  Eliselstein Black Home for Funerals is in charge of arrangements.

See Images and Documents under Attachments below. 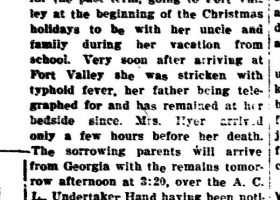 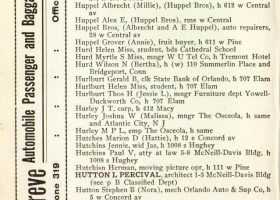 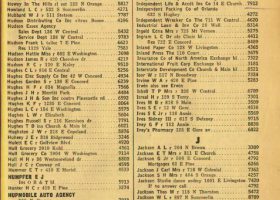 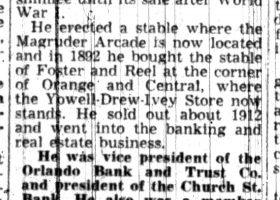 For the amount of $1000 the following property was conveyed to Braxton Beacham and Nannie Giles: beginning at a point One Hundred and Fifty seven and nine tenths feet North of the Southwest corner of Block 27 of R. R. Reid's Addition to the Town of Orlando, according to the plat of said Addition filed in the Office of the Clerk of the Circuit Court of Orange County aforesaid; and thence running North Ninety feet to Central Avenue; thence East Ninety feet to a Ten foot alley hereby created; thence South along with West side of said alley Ninety feet; thence West Ninety feet to the place of beginning; and being a part of the property conveyed to the said R. L. Hyer and Jerome Palmer by deed recorded in Deed Book 116 at page 101, and there is conveyed by this deed all the frontage on Orange Avenue now owned by said parties of the first part.

And in consideration aforesaid the said parties of the first part hereby agree to establish an alley ten feet wide on the east side of the lot hereby conveyed and running south from its northeast corner the full length of said lot, said alley to be for the exclusive use and benefit of the property hereby conveyed on the west side of said alley and for the property on the east side of said alley hereby reserved by said parties of the first part.

On 29 April 1947 Robert Lee Hyer and Mary Rinaldi Hyer granted to their niece Ruth Worsham - daughter of Robert's deceased sister Martha Caroline "Carrie" Hyer Worsham, an undivided one half interest in the following property:
Begin one hundred and twenty feet north of the north west corner of Church street and Orange Avenue in the City of Orlando and run North thirty one feet, thence west eighty two and one half feet, thence South one foot, thence West one half foot, thence South thirty feet, thence East eight three feet to place of beginning, being part of Lots one and eleven of block thirty eight of R.R. Reids addition to Orlando as recorded in Plat Book "C" page 63 of the Public Records of Orange County, Florida. Witnessed by Margy V. Clay notary.