My father gets to Lake Monroe with his truck and at that time there was no I-4, he was going around Lake Monroe with their palm trees and just fell in love. And he sent my mom a postcard and he said, “We’re moving to Florida. Start packing!”

Ruth Schankweiler Butler describes growing up in Pine Castle during the 1950’s in this excerpt from an oral history interview on April 16, 2014. (Text highlights are excerpts from audio recording.)

We got here just before Thanksgiving. We ate outside under the fruit trees at my grandparents’ house. That was our Thanksgiving dinner.…

It was an interesting life for little girls growing up at that time. We all went to Pine Castle Elementary School. We didn’t have kindergarten back then. It was only grades one through six….

Betty Crocker had a radio program… and you could write letters in and my dad wrote a letter in about her lemon pie… She won a prize and they read her letter on the radio and we had to come to downtown Orlando to get her prize… She got a toaster and then my dad’s letter was read on the radio about her homemade pie, her lemon meringue pie. My mom was an excellent cook… she made her pie crust from scratch which made them a lot better, She used Crisco and her cold water that I never mastered yet to make it roll out real flaky…. When we were growing up they didn’t have cake mixes. They had flour and then you add the sugar and baking powder and everything. One of the ones my mom used to make she’d call it a picnic cake…. because you didn’t have to frost it. You put marshmallows. After you made the cake, it was like a yellow cake and then you took large marshmallows, cut them into sections, put them on top and sprinkled light brown sugar and pecans over that. When you bake it that’s your frosting…

My grandfather built his house. My dad gave him the property. At the time they were tearing down some of the old barracks from Pine Castle Air Force Base, this was before McCoy. I guess after WWII they didn’t think they needed it, the base there. So they were tearing part of it down. So my grandfather had been a carpenter up north, so he went over and.. he bought the lumber for his house for $200.00. And he would tear it down and he built his house out of that lumber. So he had a two bedroom, one bath house, with a living room and a little small kitchen and a porch on the front, but he had to take the nails out of the boards, too. And Joan my older sister remembers having to help him pull the nails out and straighten them out because you could reuse those nails. You didn’t let anything go to waste. So he built his house out of the lumber from some of the old barracks at Pine Castle Air Force Base. It was a different time… 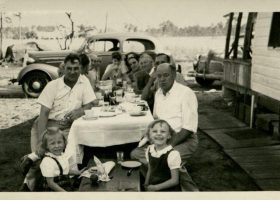 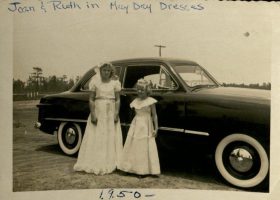 May Day Program in Pine Castle

Joan Schankweiler, left, and sister, Ruth Schankweiler, right, pose in their May Day dresses in this photo taken in Pine Castle, May... 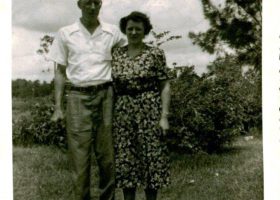 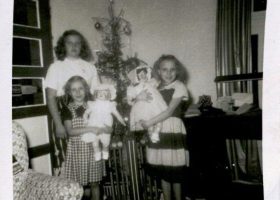 The Schankweiler sisters with their Christmas dolls photographed at their home in Pine Castle, Christmas 1951. Pictured are Joan Schankweiler, the tal... 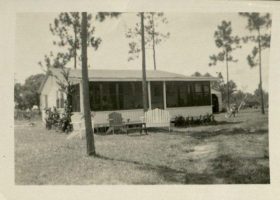 Photo of Ruth Schankweiler Butler's grandparents' house in Pine Castle where she spent many happy days playing. Her grandparents, William and Carrie S... 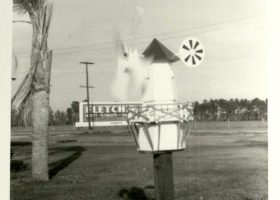 A photo of a windmill built by Paul Schankweiler, Ruth Schankweiler Butler's father, at their home on Orange Blossom Trail.