Read the transcript of the oral history interview  with artist Trent Tomengo conducted 30 December 2014, recorded and transcribed by Charles P. Ross in the studio of  Trent Tomengo  at Maitland Art Center; Maitland, Florida.

Trent Tomengo was born in Naples, Florida on September 13, 1967. His family lived in nearby Immokalee and later moved to Orlando, Florida when he was 5 years old. Tomengo attended Oak Ridge High School studying advanced-placement art under James Schermerhorn. After graduating in 1985, he joined the United States Army and completed a two-year enlistment in Hawaii under the Montgomery GI Bill. Honorably discharged from the military, he attended the now defunct Orlando College receiving a Graphic Arts Certificate in 1989. Dissatisfied with pursuing graphic/commercial art, Tomengo enrolled at Seminole Community College (now Seminole State College of Florida) in 1991. Majoring in art, he studied with artists Mark Priest and John Caputo, completing his studies with honors in 1995. Tomengo furthered his studies at Stetson University, receiving instruction under the guidance of Gary Bolding. Bolding had a tremendous impact on Tomengo’s technical proficiency as a painter and his philosophy as an artist. Receiving a B.A. in fine art from Stetson, Tomengo then attended the University of South Florida where he received an M.F.A. in Painting and a Graduate Certificate in Museum Studies in 2002. He then served in dual roles as the assistant curator, under Gylbert Coker at the Zora Neale Hurston National Museum of Fine Arts in Eatonville as well as the museum’s program coordinator. It was, however, his teaching a semester at Stetson University’s Art Department in the place of his mentor, Bolding, and teaching a humanities course at Seminole Community College a year later, that prompted Tomengo to pursue a full-time teaching career. He left The Hurston in 2004 in pursuit of a teaching position in the Humanities; he is now Professor of Humanities at Seminole State College of Florida and professionally exhibits his paintings in museums and galleries.

Trent Tomengo’s intelligent, provocative, and finely crafted paintings are well known in Central Florida, where he has been featured in selected solo and group exhibitions. His work is primarily concerned with exploring ways of conveying the universality of all human beings. Keenly aware of the divides that human beings create among themselves, oftentimes with disastrous consequences, Tomengo uses his work to preach tolerance, acceptance, and mutual understanding. His most recent work is a compelling series of paintings entitled Experience Portraits in which he explores the personal experiences of those depicted on canvas and the sentiments of viewers as they encounter these works. Portraiture has been a constant interest of Tomengo throughout his career and this series explores psychological and emotional features of sitters as well as physiognomy.

Tomengo has served as juror and co-chair for Walt Disney World’s Festival of the Masters and has earned numerous awards including the Seventh Annual American Invitational Art Exhibition at the Actors Theatre in Louisville, Kentucky. He has been the featured judge at various art festivals in the Central Florida area including the Apopka Art Festival and the Zora Neale Hurston Festival of the Arts and Humanities. He is a sought-after public speaker and writer on spirituality and the human condition in art. In 2006, Tomengo was selected from an international pool of applicants to participate in the esteemed Atlantic Center for the Arts Residency Program, sharing scholarship with American master painter, Robert Colescott. Represented by the International Portfolio Gallery in College Park, Tomengo’s paintings are earning their place in prestigious American collections. 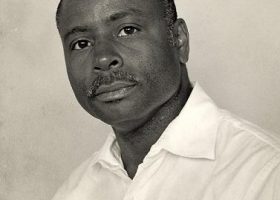 Read the transcript of the oral history interview with artist Trent Tomengo conducted 30 December 2014, recorded and transcribed by Charles P....