The following information was provided by Valerie Brown on 20 June 2010.

Vela was born on 6 April 1905 in Modesto, California. She married Arvyne Squire Hathaway and relocated to Orange County, Florida sometime between 1930 and 1944 (obituary states 1937). She is listed in the Florida Death Index as having passed away on 31 May 1971.

Vela remarried in 1945 to William E. McLeod. She had at least two daughters with Arvyne Hathaway: Marijane and Barbara.

It occurs to me that I never told you Vela’s maiden name. It’s Vogelman. She was the daughter of George and Laura Briggs Vogelman. Laura was my great grandmother’s sister.

The article that you mentioned (on Orlando Memory about George Farless) is indeed connected to Vela. George Farless was her son-in-law, married to her oldest daughter. I’d already found a gravestone photo for Mary Jane Farless prior to receiving your latest email and she died in October 1974. I can’t imagine what the poor woman went through, worrying about her son (Richard “Dickie” Farless).

Surnames mentioned in the obituary include: Hathaway, McLeod, Farless, Haire. 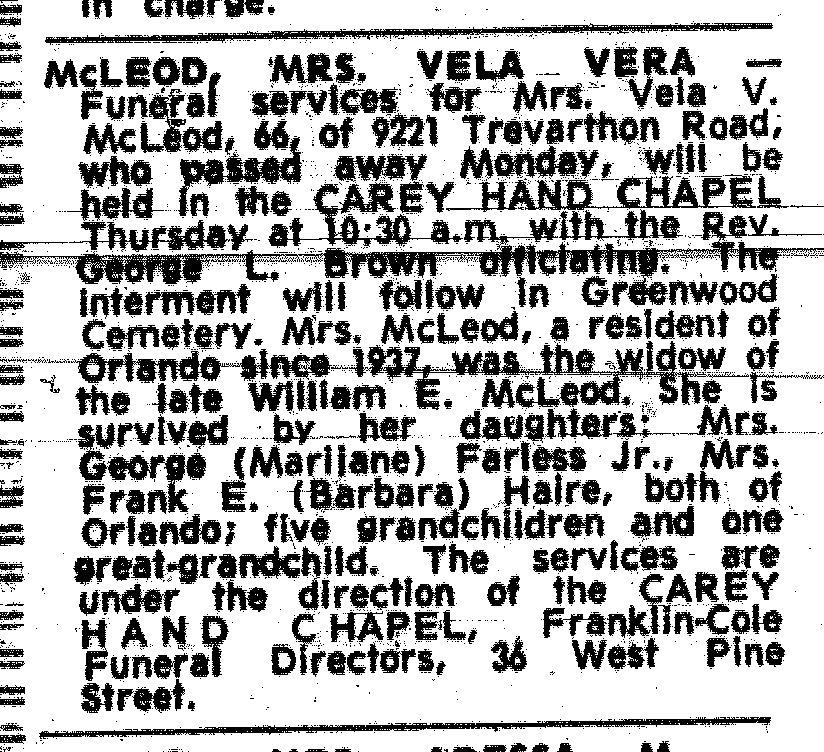 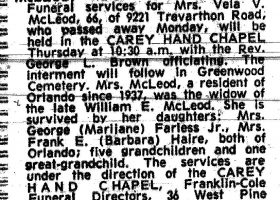 Obituary for Vela Vera Vogelman Hathaway Mcleod was published in the Orlando Sentinel on 2 June 1971 page 6C. The following information was...