The Funeral Notice of Mr. William E. Bell was published in the Orlando Sentinel 10 May 1960 on page 10B.

Mr. William E. Bell – Funeral services for Mr. William E. Bell, of 317 East Yale, Orlando, will be held Tuesday at 2:00 p.m. in the Carey Hand Chapel, with Rev. R. J. Milham officiating. Interment will follow in Greenwood Cemetery. Mr. Bell had been a resident of Orlando for the past twenty-seven years, coming from Punta Gorda, where he was supt. of public instruction for Charlotte County for many years before retiring in 1933. He was a member of the Baptist Church and the Knights of Pythias. Survivors include his wife, Mrs. Lula S. Bell, Orlando; daughter Mrs. Elizabeth L. Dean; two brothers, Col. A. H. Bell, Green Cove Springs, Florida, W. D. >Bell, Miami, Florida; one sister, Mrs. Ethel B. Stevens, West Palm Beach, Florida. Services are under the direction of the Carey Hand Funeral Home. 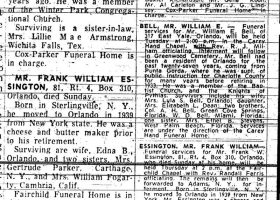 Selected Obituaries and Funeral Notices from the 10 May 1960 Orlando Sentinel page 10B. Names mentioned in these obituaries include Dr. Alton E....