Interview with WWII Veteran Keat Spriggs at Delaney Street Baptist Church in Orlando, FL, June 27th, 2010. Veteran Spriggs served in the U.S. Navy in the South Pacific during WWII aboard the&nbsp;USS 20 until it was decommissioned in Boston after the war. He really appreciates that he could serve our country against a nation that had shown its power against us back in 1941. He recalls Orlando as a small town when he came here with his wife in 1959 when the highways were all two lane roads. He worked for Martin Marietta for 30 years and retired in 1987. He is proud that we are a nation that helps people and has a great appreciation for being an American. 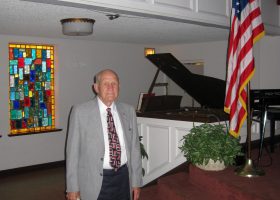