Michael Monell was drafted in 1943 and sent to St. Petersburg, FL to experience “The Jungle” in preparation for service in the South Pacific. As it turns out, his WWII tour of duty was in Europe where he served for three and a half years.

Michael is one of the eight Monell brothers from Fairmont, West Virginia all ready to serve their country during World War II. As Michael Monell shares his brother, Tony, was in the first group out for the Invasion of 1944 and was killed in battle at St. Loe, France. His brother, Frank, served in the Battle of the Bulge and saved 56 men despite being shot three times. He was awarded three Purple Hearts and the Silver Star. He weighed 97 lbs. when the Russians rescued him from the POW camp and was still bleeding, but made it home to the United States where he lives now in a VA nursing home. Brother Cosmo, became so well known in the service for cutting the GI’s hair that General Patton recruited him as his personal barber. After the war he would become famous in our area as “Tony the Barber” with a shop on Main Street in Kissimmee. Domineck, joined the Air Force and worked on P-51s during the war. He then settled in Jacksonville where he worked at the Naval Air Station for 30 years.

After his military service, Mike dreamed of one day returning to Florida. He says, “I loved Florida so much. It was just different, so clean.”

Eights years later in 1955 Mr. Monell and his family moved to Florida as he shares in this excerpt from an oral history interview at St.  James Cathedral on November 9th, 2011.

From the day his father arrived in this country at age 21 looking for work which led him to the coal mines of West Virginia, the Monell family has cherished the values of hard work and service to God and country.

WWII Veteran Michael Monell still serves his community as an usher at St. James Cathedral in downtown Orlando and has served for years as Commander of the local American Veterans post leading groups to volunteer at V.A .clinics in our area.

Regarding his parents life in America, Mike says he is, “Very grateful that they came here. I love America. So do all my brothers and my family.”

SEARCH OrlandoMemory.info using the surname “Monell” for more memories of the Monell family. 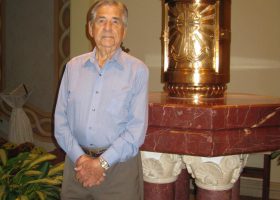 Photo of World War II Veteran Michael A. Monell at Saint James Cathedral in downtown Orlando, November 9, 2011. Michael is one of...

In this excerpt from an oral history interview at Saint James Cathedral on November 9th, 2011, WWII Veteran Michael Monell shares how his parents came to this country, worked in the coal mines of West Virginia, raised 10 children through the Great Depression, eight of whom would go on to prepare for military service in WWII.