ABOVE: Finale at “The Glory and Pageantry of Christmas” which was presented at the Walt Disney World Shopping Village for many years.

If you lived in the Orlando area or just visited from the 1970s to the present, you remember how the shopping village at Lake Buena Vista has changed and grown through the years. It has been called the Walt Disney Marketplace, Walt Disney World Shopping Village, Walt Disney World Village and the Lake Buena Vista Shopping Village. It is now called Disney Springs and we’ll wait to see how long that name sticks!  I’m sure there are great things to do out there now, but I’m only going to talk about things that are no longer there.

The Glory and Pageantry of Christmas

The most fantastic event ever held in all of Disney history was a free production presented each year in the weeks leading up to Christmas. It was called “The Glory and Pageantry of Christmas” and was located on a small stage at Disney Shopping Village. So many people came to see the performance that you had to stand in line for hours.

It was the most dramatic beautiful production and presentation of the Christmas Story that I have ever witnessed – told simply by narrator Kevin Miles (member and manager of EPCOT’s Voices of Liberty) in a deep booming yet gentle voice, interspersed with Christmas songs. Mary and Joseph appear and as they approach the manger, she reveals a child wrapped in swaddling clothes. The humble shepherds approach, one stumbling, limping and angels appear, rising up from behind the manger as if on the breeze. Their glowing appearance set against the black of the night was awe inspiring.

The narrator continues telling of how gifts are brought by the shopkeepers of the village: cheese from the dairyman, breads from the baker, flowers from the flower girl. Then he pauses and tells of the little orphan child who had no gift to bring the Christ child and strains of the Little Drummer Boy are heard as a small child of about seven years walks up to the manger sad that he is unable to give a gift to the Babe. Mary comforts him and encourages him to play. He does so and kneels down beside her and the manger, her hand resting on his shoulder.

This is, without a doubt, the most amazing presentation of the nativity I have ever witnessed, and I was not the only one who held this belief. The presentation of the event each year, brought thousands who arrived early and waited in line for hours to secure a spot on the risers or sometimes, sit on the ground at the foot of the stage. Disney ended the presentation of The Glory and Pageantry of Christmas in 1994.

At the time, Disney management said they had to cancel the event because it was so popular it was getting out of hand. Insiders said it was because so many people came to the Shopping Village just to see the performances and not to shop, that it was hurting business and the size of the crowds was hard to handle. Since they couldn’t figure out how to charge people admission, they just stopped the show. We hoped they would relocate the performance it to the Magic Kingdom where it would require admission to the park, but it was not to be. 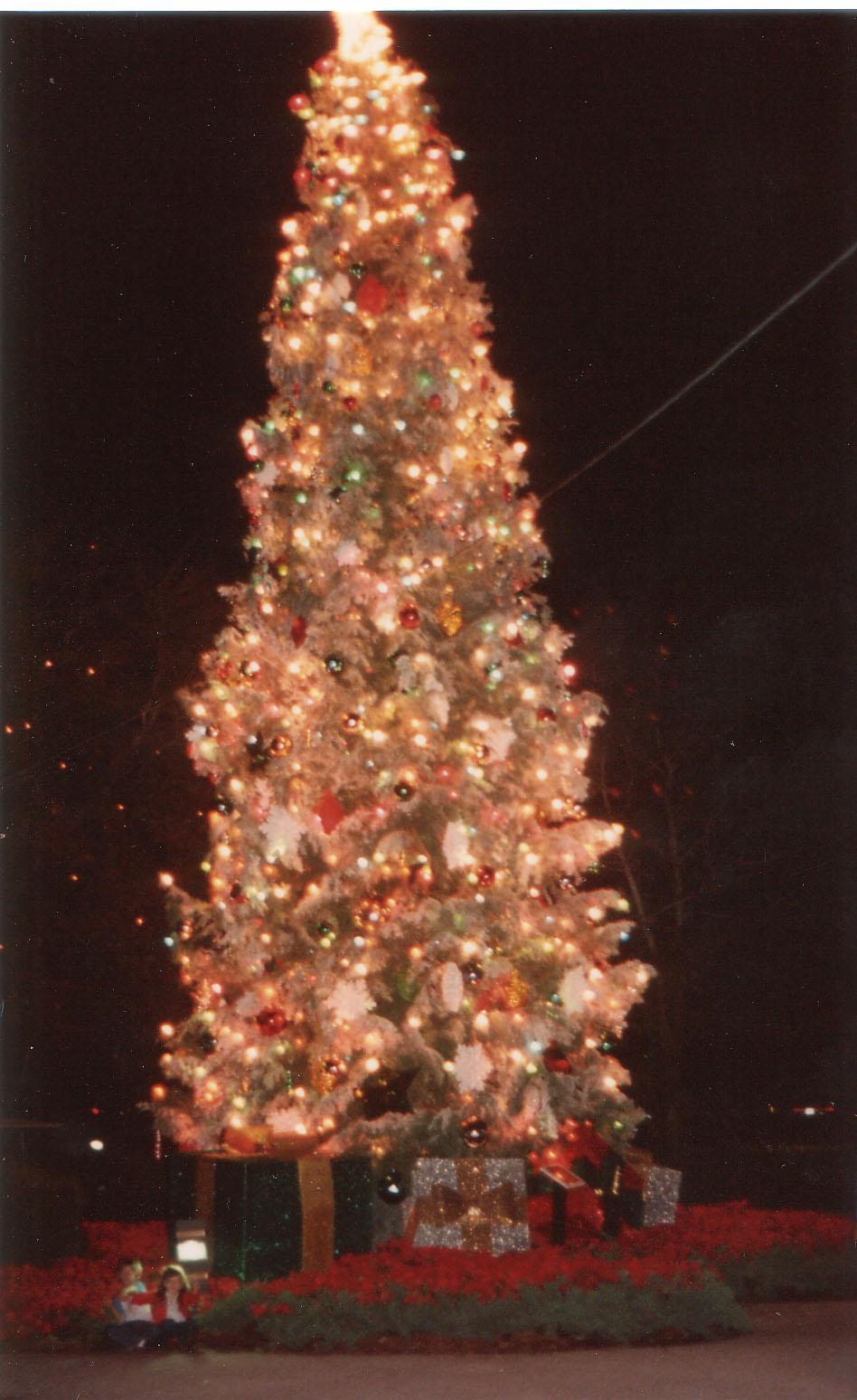 ABOVE: In the 1980’s the Disney Shopping Village would sport a beautiful, amazingly tall Christmas tree, complete with five foot tall packages at the base surrounded by a field of red poinsettias. After experiencing the Glory and Pageantry of Christmas at the other end of the Village, we always visited the tree and stopped for a photo. The two small beings at the bottom left under the tree are our kids, Christopher (age 6) and Ashley (age 4) – December 18, 1988.

Do you remember the plant shop, the candle making shop, and the pottery shop? My husband and I used to love going to the Lake Buena Vista Shopping Village and watch the artisans make pottery and carve candles, and we would out the plants for sale at the plant shop (down near the fancy food market/candy shop). We didn’t buy much as the prices were steep and our wages were low, but it was so much fun to walk around the village, sit by the lake, share a soda and perhaps some cheese from the deli in the food market.

The Pottery Chalet was in the same structure as the candle shop. They actually had pottery wheels and kilns and would make pieces to your specifications. My husband and I usually parked near this building when we visited in the 1970s and spent much time perusing the beautiful hand made pottery items. We were young and newlyweds and didn’t have lots of spending money, so we mainly explored and admired the pottery.

ABOVE: The plant shop was down past but on the same side as the kitchen ware shop that was attached to fancy food market frequented by the  vacation club members as there were no other grocery stores close by at the time. The plant shop seems like an anomaly now as no one would sell plants to tourists! But at the time, many locals would hang out at the shopping village on weekends and walk around just for the fun of it. In the early 1970s this was much more fun than walking around a mall and it gave us a connection with Disney World.

Below are photos of the interior of the Candle Shop and one of candle carvers at the old Walt Disney Shopping Village. A trivia fact that most folks here don’t know is that the Rickett family of Christmas, Florida made the cores for the candles that were dipped in colorful layers of wax and carved in the shop! It was a family affair – even the kids participated. Every person who purchased one of the hand carved candles took home a piece of Central Florida hand made by the Rickett family of Christmas!

The Candle Shop was interconnected with several shops including the Pottery Chalet. My husband and I spent a lot of time in that area watching craftsmen make the candles with unbelievable speed. We watched for hours over the years and finally bought one as a gift. They were delicate but beautiful and, because the purchaser chose the colors, every one was unique!

Do you remember the Halloween celebrations and contest with outrageously complex costumes in the 1980s? Do you remember the Disney employees dressed up in costumes lurking in the shrubbery and trees and scaring guests? I remember one year a cast member dressed like a ghoulish fellow had a life size grey Gummi mouse which he began to eat causing shrieks and sounds of disgust! We loved to attend this event each year with the kids. Even if you did not dress up (but why on earth wouldn’t you?) you got to enjoy a great night out with lots of treats and plenty of tricks in a safe environment.

My kids (Christopher and Ashley Peters) and I were chosen to be finalists in 1987! The finalists were brought on stage so the winner could be chosen. We did not win, but what fun we had! I had made the children’s costumes for Halloween that year, but had to make mine quickly as we decided at the last minute to be in the competition. 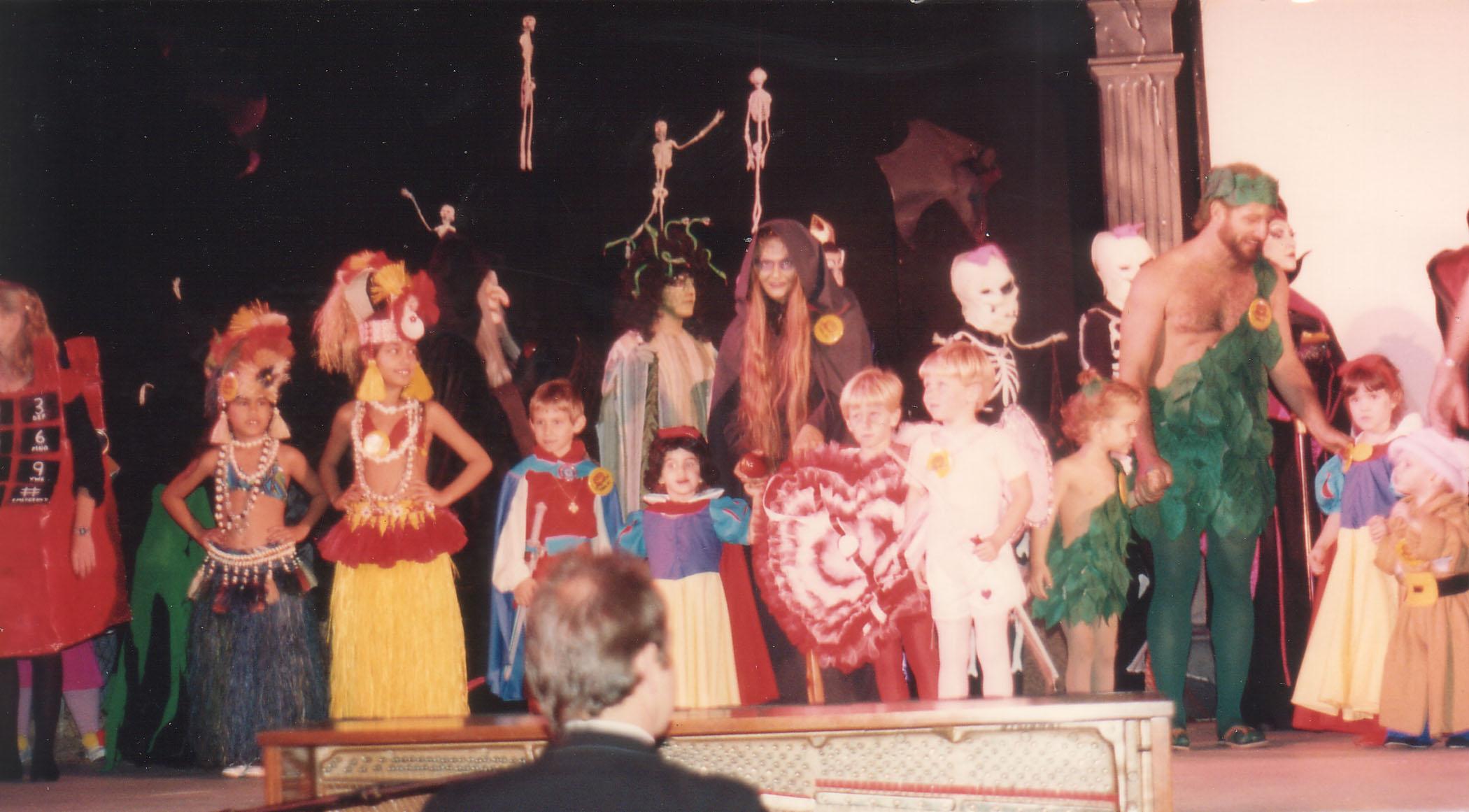 ABOVE:  As you can see, we are characters from Snow White. Christopher (age 5) is Prince Charming (carrying his Lord Liono sword from Thundercats) and Ashley (age 3) is Snow White complete with black wig and I am obviously the wicked witch. You can tell by some of the costumes, that it was a typical warm Florida Halloween! 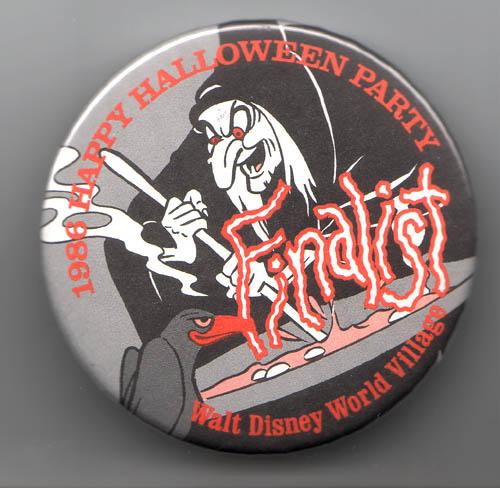 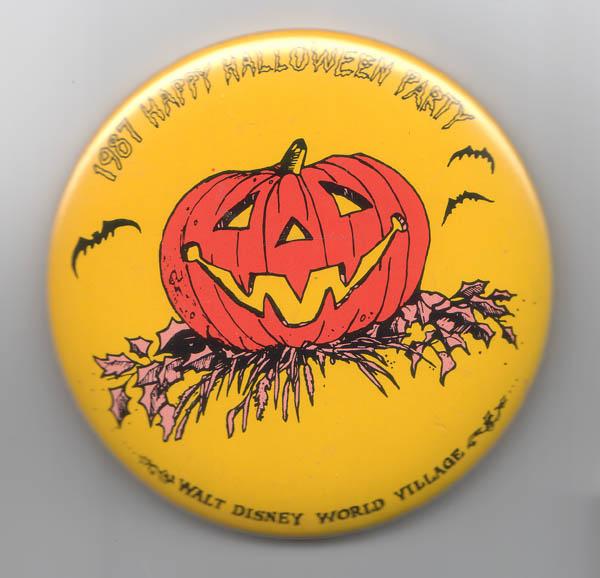 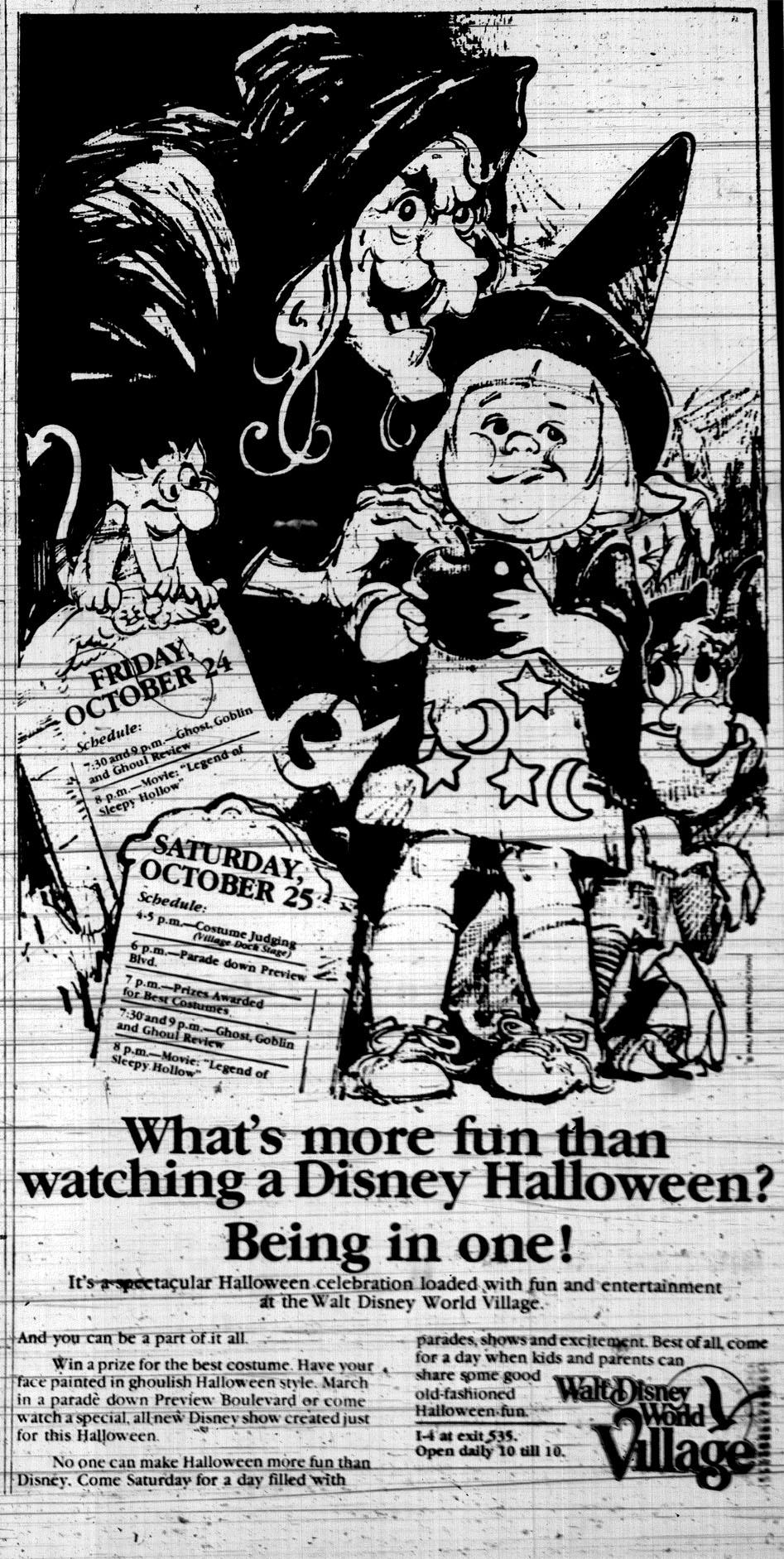 ABOVE: Advertisement for the Halloween costume contest and celebration at the Walt Disney World Village at Lake Buena Vista appeared in the Orlando Sentinel Star 24 October 1980, page 5A.

If  you have photos from the olden days or memories to share, let us know in the comments below!

Click on the links for IMAGES below and remember to read the descriptions. 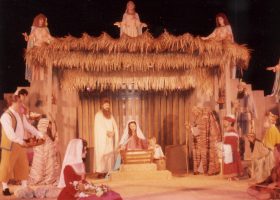 This is the finale at "The Glory and Pageantry of Christmas" which was presented at the Walt Disney Shopping Village for many... 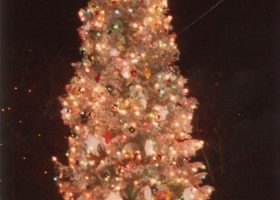 In the 1980's the Disney Shopping Village would sport a beautiful, amazingly tall Christmas tree, complete with five foot tall packages at... 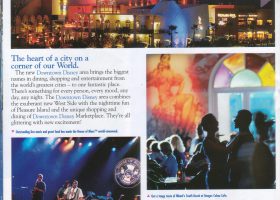 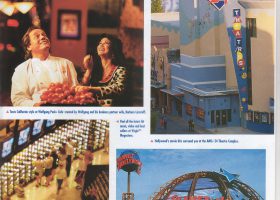 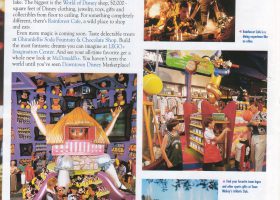 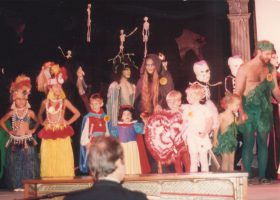 During the late 1980s the Walt Disney World Shopping Village held an annual Halloween celebration and costume contest. In 1986 and 1987... 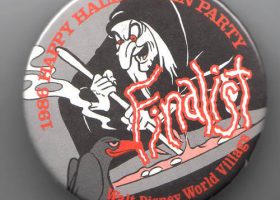 Finalist badge for the 1986 Walt Disney World Village costume contest. Our costumes were from the movie Snow White. I was the... 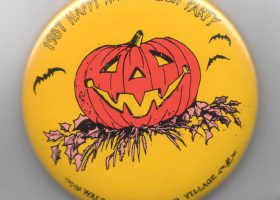 Participant's badge 1987 Walt Disney World Village Halloween costume contest. Our costumes were from the movie Snow White. I was the evil... 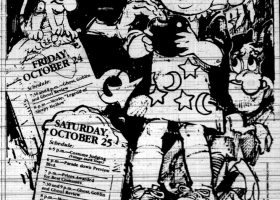 Advertisement for the Halloween costume contest and celebration at the Walt Disney World Village at Lake Buena Vista appeared in the Orlando...

Photos of the interior of the Candle shop and one of candle carvers at the old Walt Disney World Shopping Village, Lake...