When Orange General Hospital opened in 1918 it was the first full service hospital in the county. It had 50 rooms and the most modern equipment available. Although many people believe it is a city or county facility, the hospital has always been a private not-for-profit hospital. It changed its name to Orange Memorial in the 1940s in honor of those killed in the world wars. In 1976 it became Orlando Regional Medical Center after acquiring another hospital (Holiday Hospital). Today the main hospital has 600 beds. The original part of the hospital has undergone dozens of renovations and additions over the years and only a small part of the original hospital was still visible. Now, to meet new standards, the original structure is being torn down and will be replaced by a new wing. 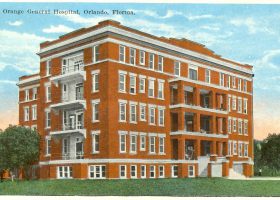 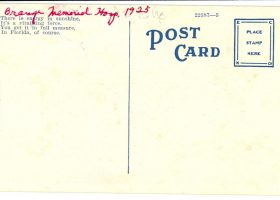 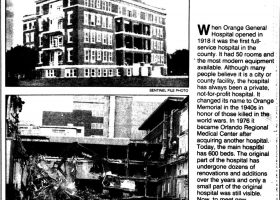 Photograph of the old Orange General Hospital and the building being torn down was featured in the Orange Extra portion of the...