Fr. Page, Pastor of St. James Cathedral 1972-1986, envisioned a three level community center with an atrium for people to gather and make a community connection. Construction for the Community Life Center began on September 2, 1979 and cost $1.5 million. Completed within a year, the Cathedral Center as it was later named, won the Annual Honor Award from the American Institute of Architects and a Beautification Award from the City of Orlando.

According to Orlando Sentinel columnist Ed Hayes, “The costly Cathedral Center… went under construction in 1979 when downtown Orlando desperately needed a boost, struggling as it was to survive a decade or more of decay and swiftly diminishing business. The center was widely viewed as an act of faith and hope in the area’s future. “ 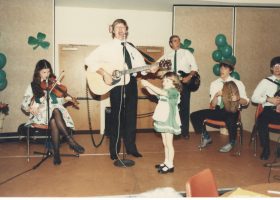