A visit to the Blessed Sacrament Chapel at Saint James Cathedral in downtown Orlando is the first stop for some visitors to The City Beautiful. For locals, the chapel is a sacred space where people of all faiths find quiet in a busy urban centre. In these November 6th, 2010 oral history interviews at the restored Saint James Cathedral, parishioners share memories of the chapel, its art, and the meaning this sacred space has in their lives.

The Blessed Sacrament Chapel was part of the Community Center, later named Cathedral Center, construction started in 1979 when downtown Orlando was struggling to survive after a number of business closures. The chapel was a gift to the community from Mr. and Mrs. Heidrich, Saint James parishioners.

According to Orlando Sentinel columnist Ed Hayes, “The costly Cathedral Center… went under construction in 1979 when downtown Orlando desperately needed a boost, struggling as it was to survive a decade or more of decay and swiftly diminshing business. The center was widely viewed as an act of faith and hope in the area’s future. “

The Cathedral Center was designed by Peter Rumpel of Jacksonville, with Willie Malacher of Rambusch Company in New York as consultant, and built by McCree Construction of Orlando. Completed within a year, the Cathedral Center won the Annual Honor Award from the American Institute of Architects and the Beautification Award from the City of Orlando.

The stained glass windows from the original St. James Church, or “the little white church” as it was known, were restored and added to the chapel in the renovation completed in November 2010. 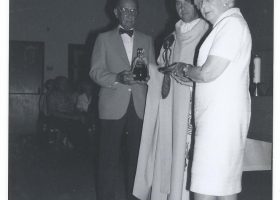 Father Page with the Heidrichs at Saint James Cathedral

Photo of Father Page with Mr. and Mrs. Herman J. Heidrich presenting the gifts  in the new Blessed Sacrament Chapel at Saint James... 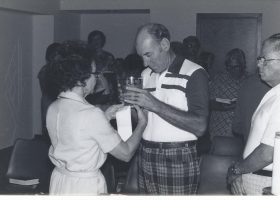 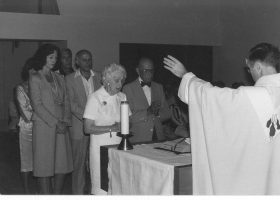 Photo of Father Page and parishioners at the Dedication Mass of the Blessed Sacrament Chapel at Saint James Cathedral in downtown Orlando. St.... 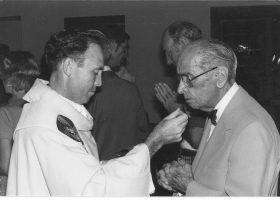 Mr. Heidrich at the Dedication Mass for the Blessed Sacrament Chapel

Photo of Mr. Heidrich receiving Communion from Father Page  at  the Dedication Mass for the Blessed Sacrament Chapel at Saint James Cathedral... 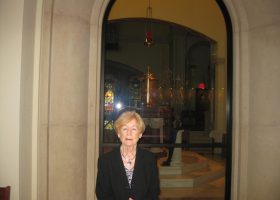 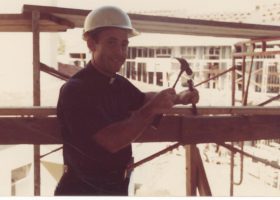 Born in Jacksonville, Florida Valerie Hall came to Orlando for a  great job opportunity and has been a member of St. James Cathedral for 12 years. She joined St. James because she liked the music program and the priests. She sings in the choir: soprano, alto, tenor and often serves as cantor. She says, "Giving back to the community is big at St. James, on an individual and community level." Ms. Hall loves working with the senior Prime Timers, the Knights of Columbus and is involved now preparing second graders for their First Communion.

When asked what she sees as the future of St. James she recalls her office group going to the Cathedral on 9/11 and says, "I think St. James will continue to be a light downtown. We're going to continue to serve, to bring people in, to be here for people of all faiths."

Interview with Yebrail K. Brennan at Saint James Cathedral in downtown Orlando  November  6th, 2010, two weeks before  the reopening of the Cathedral.

Mr. Brennan's  earliest memory of Orlando is  St. James Cathedral. On his first visit to the area he stopped in to attend daily Mass in the Chapel and  has very fond memories of this visit.  Mr. Brennan  eventually  moved  here from New York City to be closer to his family and is thankful that St. James is right downtown where he can come in for quiet time. He believes St. James Cathedral is going to continue to be a spiritual haven for people in Orlando as the city continues to grow and prosper.

Hear his memories of singing at Saint Patrick's Cathedral as a boy in New York City and his gratefulness at serving in Saint James Cathedral Choir in Orlando today!

Mr. Serros was baptized in the original wooden church and recalls, "the murals in the chapel which were part of the original wooden church were part of the church in which I was baptized... To see these beautiful murals restored and now back in the cathedral" is a special memory for him. Mr. Serros and his two older brothers all attended St. James School. Mr. Serros remembers the school and making his First Communion and Confirmation in the 1930's. The sacraments were memorable events for him. Father Bishop was here in the late 1930's and early 1940's. Father Farley, later Monsignor Farley, selected Mr. Serros as one of the first church lectors. In those days only men were lectors. Mr. Serros also served as a Eucharistic Minister for many years and as a Special Minister bringing Holy Communion to the sick and homebound. He says, "My church experience has been absolutely critically important to my spiritual life." Mr. Serros remembers the priests through the years, Father Bishop, Father Page and Monsignor Farley. He also remembers when Orlando was much smaller, "a safe town, we didn't lock our doors... definitely a small city feel." When asked what he treasures about Orlando he says, "I treasure riding my bike around Orlando... and early memories simply playing in the neighborhood. The very simple things in life that young boys do with their friends."


Community Giving: A History of Sharing Time, Talent, and Treasure in Orlando

From a $90,000 a year thrift store for the poor to soup and sandwiches for the hungry, St. James Cathedral's history of community giving is dedicated to serving the needy in our area. As an Orlando organization tithing 10 % of their collection, St. James financially supports such worthwhile institutions as Apopka Family Learning Center, B.E.T.A. Center, Coalition for the Homeless, Covenant House of Central Florida, Fresh Start, Health Care Center of the Homeless, iDignity, JMJ Life Center, Morning Star School, Russell Home for Atypical Children and more. In this excerpt from an oral history interview at St. James Cathedral on August 15, 2011, Frank and Mary Jane Sevick highlight the origins and outreach of a few St. James community activities such as offering soup and sandwich to those hungry at lunchtime which grew into the Daily Bread and the development of the Christian Service Center. They recall St. James parishioners such as Kathy Hummel one of the founding members of B.E.T.A., Beverly Gawlick who started Outreach Love,  Dick Rupp who assisted with the St. Vincent de Paul Thrift Store on Parramore, and Fr. David Page who worked diligently with the downtown community to establish the Christian Service Center. The legacy of community building continues as 2,789 people in Orlando were assisted by St. James through St. Vincent de Paul donations last year. Learn more about the history of community organizations in the Orlando area and the contributions made to the lives of our citizens in this interview.