My mother said that she had to go around and when she saw a bicycle, tricycle or wagons and things she would go in and tell the people what kindergarten was and how good it was. She had been trained in Germany by professionals. So that’s how it started and gradually, gradually people just got used to people going to kindergarten.

Soon the school at 26 W. Steele Street became the school for the mayor’s children and the school pediatricians suggested to mothers in the area for their children.

Mrs. Achenbach who served as a Red Cross nurse during the war caring for the Red Baron and others, would bring that same dedication and care to her students. The school’s reputation in the community was outstanding.

LISTEN  (21:08) as Irma Scudder Achenbach tells the history of The Open Air School which she took over as principal when her mother, school founder Erna Wentzler Achenbach retired. Interview conducted on July 25, 2013.

VIEW Photos of the College Park school, the students, instructors and read the history:

Listen to an archival interview with Erna Wentzler Achenbach conducted on June 25, 1975. 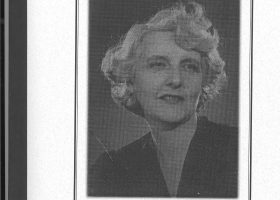 Education pioneer Erna Wentzler Achenbach was trained in Germany by Maria Montessori and Friedrich Froebel. She and her husband came to settle...