In the old days (around 1999) the Backstreet Boys would record at Parc Records’ recording studios owned by Pat Armstrong in Altamonte Springs when there were at home here in Orlando.

Ashley Peters and Ashleigh Teicher just happened to be in the neighborhood and noticed Howie Dorough getting out of his car in the parking lot. He was kind and happily allowed their Mom to take a photo of the girls with him. They went immediately to have the film developed, despite not having taken all 36 images on the roll of film. There was only one photo on the roll they wanted anyway!

A day for the memory books for two teenage fans! 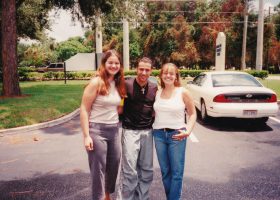 Long time ago (around 2000) the Backstreet Boys would record at PARC Records Studios in Altamonte Springs when they were home here...