This series of  Orlando Sentinel newspapers covering just a few days in November 1963 chronicle President Kennedy’s assassination in Dallas and the international response to the horrific event.

Read  pages 1-3 from the  November 22, 1963 Orlando Sentinel – The day Kennedy was Shot. The newspaper reports that the “Birdman of Alcatraz” died and Orlando City Commissioners are arguing about the construction of a Convention Hall in Exposition Park at the fairgrounds or a music hall at Loch Haven Park. You read that a black Airman 1st Class W. B. Brim has caused a controversy by simply moving his family into a “white neighborhood.”

Another article reports construction projects taking place on Merritt Island at Cape Canaveral including the construction of the world’s largest building (we know it as the VAB – Vehicle Assembly Building). And yet another reports that the city can’t shut down Herndon Airport to aviation because they have a 20 year lease.

A separate front page story announces that the Sunshine State Parkway – the pike – is ready for use by the public and would open at noon on November 22 – that very day – for persons traveling from Orlando to Miami.

The medical board suspended the medical license of Dr. Bradford White, former Orlando physician and Captain Joe G. Hyde, Jr. of La Grange, Georgia, is missing – the wreckage of his U2 spy plane found off the Gulf of Mexico but the cockpit found empty. His mission likely over Castro’s Cuba – remember the Cuban Missile Crisis?

And on the local front, there was a water main break on Gore just east of Orange Avenue the day before, shutting down the intersection during lunch rush.

Last but not least, there is a photo of President and Mrs. Kennedy and Governor and First Lady of Texas, smiling from their vehicle as they arrived in San Antonio with a note that they would be in Dallas on Friday. No one reading that paper on Friday morning, November 22, 1963, had any idea how the day would unfold, turning our nation and the world upside down.

Others mentioned in the pages are Billy Graham, Gov. George C. Wallace, Cov. Farris Bryant, Very Rev. Oscar L. Huber, and comments from a host of Floridians. Read selection of pages entitled “Life of a President” from the A section of the  November 23, 1963 Orlando Sentinel. 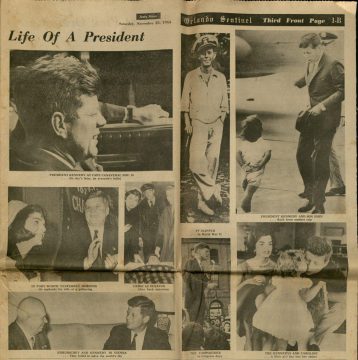 Read page 1B from the November 23, 1963 Orlando Sentinel
Featured on this page is a photographic collection depicting events in President Kennedy’s life entitled: Life of a President. Another feature is a half-page article entitled: A Luncheon with a Courageous Man written by then publisher of the Orlando Sentinel Martin Anderson.

Comments and photos of 32 Florida residents were featured on page 2A in the November 23, 1963 edition of the Orlando Sentinel.

Most of the A Section was devoted to the details known at the time surrounding the horrific assassination of President John F. Kennedy in Dallas, Texas the previous morning.

Graham Had Premonition About JFK.

Section of page 16A from the Orlando Sentinel published on November 23, 1963, is primarily devoted to the horrific events of the previous day that threw the nation and the world into a state of shock and sorrow.

Featured in this section are three photos and an article about Evangelist Billy Graham’s premonition about JFK.

In the article Billy Graham revealed that Texas Gov. John B. Connally came to his hotel room in Houston two weeks prior to the assassination of John F. Kennedy and said he was “troubled and concerned” about the forthcoming trip of the President to Texas.

Billy Graham said “I had such a strong premonition that the President should not go to Texas that I tried unsuccessfully to reach him through Sen. George Smathers (D. Fla).”

Photographs show the casket being removed from the plane from Dallas and the image of the Secret Service agent pushing Jacqueline Kennedy back into the vehicle when she climbed out on the back to retrieve what was later revealed to be part of President Kennedy’s skull. 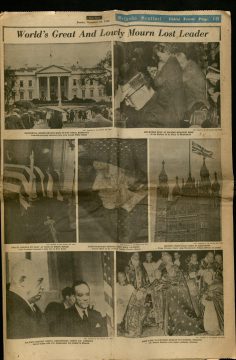 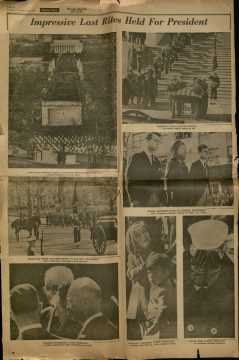 Read pages from the November 26, 1963 Orlando Sentinel – Peace of Eternity Comes to Kennedy – Impressive Last Rites for Fallen Leader. Includes photographs of the funeral of President Kennedy and the iconic photo of his little son John John saluting his father as the caisson rolled past the president’s family.

Read page 3A from the Orlando Sentinel November 26, 1963 – In Orlando Too A Farewell Salute

Articles expressing different views on whether Cape Canaveral should become Cape Kennedy in the aftermath of the assassination that stunned the world. Photo shows now Cape Kennedy workers erecting sign with new name while the sign maker is still completing the letters in Kennedy’s name.

Peruse the images and documents under Attachments below. To enlarge images, right click and save to your device.

Peruse the three pages selected from the November 22, 1963 edition of the Orlando Sentinel and you will see that the "Birdman...

Front page of the Orlando Sentinel, November 23, 1963 - Sniper Slays Kennedy. Read all the articles in this edition pertaining to...

Read the three page section of the Orlando Sentinel from November 24, 1963 under DOCUMENTS. 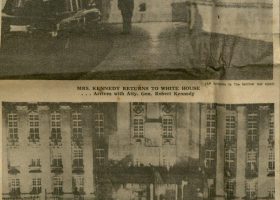 In Orlando Too A Farewell Salute

From the November 26, 1963 edition of the Orlando Sentinel, page A3. Caption: In Orlando Too A Farewell Salute. Honor guard from U.S. Naval...

Section of page 16A from the Orlando Sentinel. The entire section was primarily devoted to the horrific events of the previous day...

Comments and photos of 32 Florida residents were featured on page 2A in the November 23, 1963 edition of the Orlando Sentinel....

This image of the honor guard attending to the coffin of John F. Kennedy after it arrived in the East Room at...

Images from the funeral of President John F. Kennedy published in the Orlando Sentinel on November 26, 1963. The  montage includes images  of...

The iconic image of little three-year-old John F. Kennedy, Jr. as he salutes the flag draped casket of his father rolling by...

Several pages from the Orlando Sentinel published on November 23, 1963, the day after the assassination of John F. Kennedy.

Life of President.pdf
November 23, 1963 - Life of a President - Luncheon with a Courageous Man - Orlando Sentinel

A pictorial display entitled "Life of a President" and an article entitled "A Luncheon With a Courageous Man" from page 1B from the Orlando Sentinel the day after the assassination of President John F. Kennedy.

The lengthy article entitled "A Luncheon with a Courageous Man" was written by then publisher of the Orlando Sentinel Martin Anderson.
His final paragraph expressed the feelings of most:
"He belonged to the people and the people loved him as an individual, because he was a warm, charming human being with a beautiful wife and two wonderful children. And because he was fundamentally a great American who believed in rights for all the people."

Three pages from the Orlando Sentinel published on Sunday, November 24, 1963. Some of the articles: World's Great and Lowly Mourn Lost Leader, A Nation in Mourning for its President, Reader Pays Tribute to President, Texans Stunned by Assassination of President, Police say pictures link Oswald with Murder Rifle, Turning saved life of Connally.

The Orlando Sentinel published on November 26, 1963, the day following the funeral for President John F. Kennedy had this banner: In Death as in Life, World Honors Fallen President - Peace of Eternity Comes to Kennedy.

The front page featured the iconic photograph of little John Kennedy, Jr. saluting his father's flag draped coffin as the caisson rolled by taking him to his final burial site at Arlington National Cemetery.

These two photos from the November 30, 1963 edition of the Orlando Sentinel shows how quickly folks at Cape Canaveral embraced the idea of naming the area in honor of the President who dreamed it into existence.