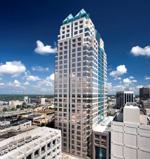 ABOVE: SunTrust Building in downtown Orlando, featured in an episode of “Superboy” produced at Century III Teleproductions at Universal Studios.

You know the meaning of OBT, and don’t drive down it after 5pm.

You are at Wal-Mart more then you are at your own home.

You find yourself humming the jingle for Premier Adult Factory Outlet.

You prepare for hurricane season by buying pretzels and beer.

You have to be over 90 years old to know what snow feels like, and have seen it in another state.

Your air conditioning bill is higher than the annual budget for most small countries.

You’ve lived here the majority of your life, yet still claim to be “from” somewhere else.

You refuse to go in the pool because the water temperature feels hotter than the air temperature.

You don’t think twice about wearing your sunglasses while driving in the rain.

You turn the heat on in your house as the temperature dips below 65.

You drive to the store, three blocks from your house.

You’ve spent hours on the Lazy River just to flirt with the lifeguard.

You know where Disney is, but not well enough to give decent directions.

You know where and can name  six major motels within five miles of your house.

You own five really hip jackets, but have only had the chance to wear one.

You’ve  started out on a Friday night, determined to find a hip, exciting, new night spot, only to end up back on Wall Street.

You can name every mall’s food court choices.

You’ve been to Universal a thousand times and never had a chance to ride Jaws.

You have imagined what would have happened had Nick Anderson not missed those free throws.

You know where to find 4 different Ci-Ci’s Pizza’s.

You can not only name all Backstreet Boys and NSYNC dudes, but also point out their various houses around town.

You remember when it used to be cold on Christmas.

You can recite a Morgan, Colling and Gilbert commercial. (now Morgan & Morgan).

Your pet name for mother nature is mother-something else.

You do Christmas shopping in January.

You were taught that the best way to avoid a gator is to run in a zig-zag.

You are afraid to visit the beach or a water park because of the abundance of tourist speedos.

You regularly  mention the high risk of shark attacks at Daytona and New Smyrna to all tourists who ask.

There are only two weather conditions: “hot or raining”.

You know someone who has passed out from humidity.

There is a gator in your swimming pool, and you know who to call.

Only you are allowed  to call it “O-town”, and anyone else who does will get smacked.

You don’t know why you live in Orlando and can’t remember when you moved here.

Your idea of mass transit is the Disney Monorail.

Some of your best friends are people you met in line somewhere or in traffic.

You’ve spent time pondering the meaning of the lights on the side of the Downtown Public Library.

No matter where you go, you are always 30 minutes away.

Instead of  explaining to  people from other  places that you are from Winter Springs, Winter Park, Altamonte Springs, Lake Mary, Longwood, Sanford, Casselberry, Christmas, Maitland, Apopka, Windermere etc., you simply tell them you are from Orlando.

You’ve got a tan  line on your wrist from theme park wristbands.

VIEW  You’re so Orlando if…

Back to top
TAGS: orlando, you know you're from orlando
ATTACHMENTS

SunTrust Center, a skyscraper located in the Central Business District of Orlando, Florida.

The Orlando Weekly publish this list and offered prizes to top entries.