Pat Greene of Urban Rethink tells us how his grandmother Orlando Sentinel editor, columnist, and groundbreaking reporter, Edee Greene taught him critical thinking skills: She got the Wall Street Journal, The New York Times, The Fort Lauderdale paper, and The Miami Herald every morning and we’d sit and read it…sit and discuss what was going on in the world. And if I said something that was just an inane, like an emotional response; I wasn’t really using my mind, she’d go well, that doesn’t mean anything. I’d have to back up what I said. I’m really glad now that she kind of pushed that. She would tell me that I was too smart to just say something based on emotion. She’d tell me if you have to raise your voice to give your opinion then you probably don’t know what you’re talking about…

We invite you to challenge your ideas of art and thought in this unfiltered oral history interview with local celebrity Pat Greene of Urban Rethink.

How did you get involved in the creative community?
I grew up playing sports and I was really good at math and I didn’t do any art when I was a kid. But I really liked music and I always liked to read and I always thought I was creative but I wasn’t sure. And I could write. And I remember my mother was an artist….I took some art classes at Rollins one time. And then I never showed any art until a little over 10 years ago. And then I kind of quit painting because I started to think my painting was like a lot  of other people’s paintings. So I started doing installations, performance things. You know I ran for mayor in 2004 and my slogan was: “I don’t want to talk about it…’.

I was at Nickelodeon from 1994-2001. I was at NASAL. I went to Seattle for a year. And I think that Nickelodeon gave me a lot of ideas.. But before that I was doing environmental testing. I worked in a lab and I started doing field water testing…I think a lot of people have these preconceived notions of testing. Like you have to think of the whole concept of facts and stats. You have to pay attention to what goes into it. And I think that really I am an artist kind of like my grandmother was a journalist.

She was kind of like a real groundbreaker in the 50’s and 60’s. She was pretty radical. And she, I think, she had a lot to do with me learning critical thinking skills….And, my dad, her son, he did too. They all read a lot….My dad was a con man. He was arrested for mortgage fraud when I was 14. He did a lot of things. My dad was a con man, but he was really, really well read. He was definitely a critical thinker…He taught me a lot about reading people….

But I think that the idea that I probably became an artist is because I was raised with a lot of curiosity. And I do think that my father had a lot to do with it because he paid the phone company in pennies one time. He did a lot of stunts. He got mad at them and he owed them about a thousand bucks and he got wheelbarrows full of pennies and he hired some kids to push it in…He used to tell me life is pretty much mostly theater….

What is your grandmother’s name?
Edee Greene. There’s an Edee Greene Day in Broward County for her. She died in 2000 and she was 87. They said that she was a feminist. She said, “I didn’t even know what that was when I first heard it. All I knew was that I wanted something and I was going to get it. To hell with anybody that was going to get in my way. There’s no reason just because I’m a woman that I’m not getting what I want. I’m smart and I’m capable and I’m getting it.”

So I just thought that she was always kind of one of my buddies you know. I’d go over to her house with a bottle of scotch and we’d sit around and drink and tell stories. She loved my dad’s smuggling stories. She goes, “Tell them about the time when those guys tried to take your boat in Columbia…”

I really think some of those influences though like not seeing the world in the usual way. Like I don’t think expectations were at all the usual. Like I almost became an artist because I was interested in it. It was like I just ended up reading and really being obsessed with it and reading a lot about it.

Life of an artist in Central Florida.
But since like 2000 I’ve shown at Cornell and Rollins. I did an installation on the Cherokee reservation. I showed at the Bemis Contemporary Art Center in Omaha which is a pretty major place. I showed at the University of Florida. I showed at a bunch of places, but in a way I have no business doing it….

I think I was brought up around people who said if you want to do it, just go ahead and do it. Like what’s the big deal. Like I think they found it more comical that someone would call you a fraud. It’s like my grandmother and my dad told me, “You can learn anything you want to learn. If you want to learn you can learn it. They brought me up with the mindset that if anybody even questions that they’re probably questioning themselves more than you.”

Creative Projects in Orlando.
We did the “Walk on By” show, do you know about that? I have this thing called The Corridor Project and the idea is to do a contemporary art museum that doesn’t have a location really. It’s site specific art and performances.  On September 5 we did over 40 installations. We put them up before sunrise and then we had performances at 8:30 in the morning.

But we had Howard Middle School perform in front of Peacock, some down on Virginia. Then we had Faith Arts Village, some from Presbyterian Church. They had a choir sing for us and they had like 50 people out there in robes…

I think Cole [Creative City Project] and I have the same attitude that if you want to have a better arts community you can’t regard other people doing art as your competition. You have to regard them more as community and I think we’re pretty much on the same page with that. And we have to help each other. There is still kind of a small town kind of feel like if you have a gallery and someone else opens a gallery, people sort of get nervous. Instead of thinking we might have an arts district or whatever…

A lot of times if you have an art show you sort of have an idea of what that means – I want to take that idea away. I wan to take it away and make it so interesting that you’re kind of like well it might not be what we expect. I don’t want the expectation to be so obvious…

Church and the arts community.
I guess a lot of artists were like, because the churches were involved, they were unsure… I was brought up around a different element. I was raised Catholic, but then we became Episcopalian. I was brought up around kind of like a bunch of intellectuals… And I say to people, you know the Church was a big part of the civil rights movement, abolitionists. There’s so many things, like I don’t understand the whole idea of sort of quantifying people beforehand.

Like even a lot of people that help me out, like artists, the hipsters, they have their own preconceived kind of notions. And I said, “You know I think you need to talk to each other before you kind of decide what people are like…”

That’s a big part of The Corridor Project. I want to get people to know each other who are in different worlds. Like Will Benton [Faith Arts Village] like I’ll introduce him to some young hipsters. But I’ll say, “You guys are on the same page with a lot of things and you guys need to realize this.”

That’s what I’m trying to do. There’s obvious sort of things like I’m going to introduce a black man to a white man or a gay man to a straight man. But I think it goes a lot, like there’s a lot less obvious things that people kind of go for, too. There are things like I don’t like hipsters, I don’t like yuppies. They don’t mean anything. Let me talk to this person…

Art and reading.
Because I have a passion for books I have a passion for art. And I, when someone tells me “No one’s reading anymore,” like I hear things where people say no one’s reading anymore and they almost seem relieved. But I go, yeah, just because you can’t read maybe you found a place in society for yourself. But that doesn’t make it, that’s just not even true…

Well one of the main influences for The Corridor Project was I was reading this book Sound Art Installations by Alan Licht. He’s a musician, a musicologist and an amazing writer. But he was talking about the idea of sound art installations which is another thing that I haven’t really, hasn’t been much of around here that I know of. But one of the points he made is no matter how much the contemporary art world and contemporary art spaces have changed, that the actual physical space hasn’t change that much since the 50s….I want to think more about the art and adopting the space to the art.

Socially engaged art.
Corridor  Project’s going to be doing stuff for the fringe in May [2013]. I’m trying to put stuff together. I’m trying to put together the socially engaged kind of group that works in the schools right now. Because I’m just excited about it and I think that kids seem to listen a lot more, too. They haven’t decided that they hate life yet. I mean some of them have. But I think a lot of people my age are ready to scoff at anything but I need to keep an audience that is still excited about life.

…if you just really show the kids all these things and really get out there and do it they just think it’s part of life. I mean it is part of life, and if they go this is part of what I do and they will kind of stick around and keep things going like The Corridor Project or the Creative City Project….

Read “Pat Greene is Leaving Orlando, and we don’t want to talk about it.” 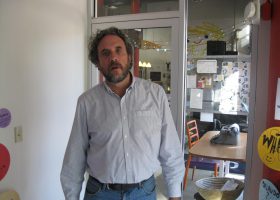