Tuesday morning at 10 o’clock the bodies of Mr. E. P. Lewis and F. Garner of Apopka and Frank and Clarence Garner of Orlando, the victims of Sunday’s tragedy on Lake Apopka, were laid to rest in the Apopka cemetery.

These parties went for a motor boat ride on the lake Sunday, and from the best information must have lost their lives during one of the storms that passed over the lake, one at about 11 a.m., and the other at 1 p.m., as when the boat was found standing on end two miles out, the machinery was still in perfect working order. Late Sunday evening, when the parties failed to return, searching parties were formed. It was at a late hour Sunday night when the boat was found, but the search was continued for the bodies, and last night about 8 o’clock the four were fished up from near the boat and within ten feet of each other. Two of the men were partially disrobed, having taken off shoes and coats, apparently trying to save themselves from a watery grave.

Mr. Lewis leaves a wife and two married daughters, while F. Garner and Clarence Garner each leave their wives and one child each. John Garner was a single man and an employee at the Nye packing house in this city. Clarence Garner, who had been an employee of Chase & Co., was a brother in law to E. E. Carroll, one of Oralndo’s [sic] grocery merchants. –Reporter-Star. 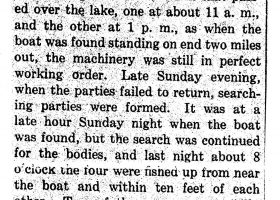