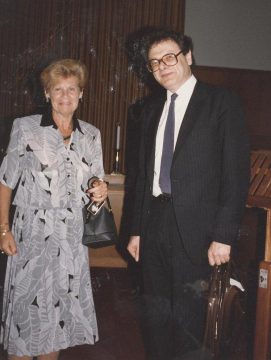 Gilbert has written extensively on the State of Israel, the Holocaust, and World War II. He is the author of what became the most voluminous biography ever written on Sir Winston Churchill, totaling over nine million words and six volumes.

Helen Garfinkel  Greenspun survived seven concentration camps and a Death March from Dachau to Allach concentration camp. Her parents, Kalman and Sara Garfinkel, and her brother, Fishel, and sister, Rachel, were gassed at Treblinka, Poland in October – November 1942  along with  Chmielnik’s other  Jewish citizens  deemed unfit for labor. Her aunt and four cousins from Busko Zudroj, Poland also were killed by the Nazis along with every Jew in Busko.

Mrs. Helen Greenspun and her  husband, Joe Greenspun, also a Holocaust survivor, moved to Orlando with their two daughters, Pauline and Rita, in 1973.

Orlando Magazine, January 2010, recognized Helen Greenspun as a “Good Neighbor Who Gives From the Heart” for her contribution to our community  volunteering with the Holocaust Memorial Resource and Education Center of Florida. 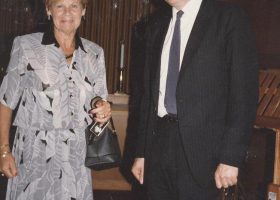 Photo of Holocaust survivor Helen Greenspun with British historian Sir Martin Gilbert. Gilbert has written extensively on the State of Israel, the Hol...

Request a copy  of the   book on Holocaust survivor Helen Greenspun and family: Sara's Children and the Destruction of Chmielnik from  the Orange County Library System.

Biography on the life of Central Florida resident and Holocaust survivor Helen Greenspun.

San Diego Jewish Press-Heritage, July 6, 2001, article on Suzan Hagstrom and the writing of Sara's Children and the Destruction of Chmielnik, about Central Florida resident and Holocaust survivor Helen Greenspun.

June 03, 2009: This week marks the 65th anniversary of D-Day. Local Holocaust survivor Helen Greenspan lives in Longwood, but she grew up in Poland. In 1939 she was almost 13 years old when the Nazis invaded. Listen to her harrowing tale of survival through the labor camps of Hitler's regime on Intersection.