John Sobik Jr., founder of Sobik’s Subs, passed away peacefully on Tuesday, May 19 in Albany, New York at the age of 76. He was born on June 4, 1938 in Rome, New York to John and Mary Karash Sobik.

John Sobik Jr., was a street smart, successful entrepreneur, self-made – yet humble; a devoted Rotarian, a family man with a big heart and an active and caring member of his community.

John spent his early years growing up in West Moreland, NY, where he graduated high school. His Central Florida journey began in 1960 when he and his new wife, Beverly Gray Sobik, decided to leave their home in upstate New York and head to the up-and-coming state of Florida. Their transportation was a 1940s Pontiac that cost about what a tank of gas costs today.

After gaining some early restaurant experience as a cook at Orlando’s landmark Ronnie’s Restaurant and a restaurant manager  at Howard Johnson’s, John and Beverly opened the “QP Sandwich Shop” on Edgewater Drive in Orlando. In 1969, after several years of success due to John’s vision, Beverly’s execution, and the couple’s tireless work ethic (all while raising a family that had grown to four children), John and Beverly sold the QP and used the proceeds to open the first Sobik’s Subs sandwich shop on State Road 436 in Altamonte Springs.

Not willing to rest on his culinary laurels, John ushered in his retirement years by opening and operating the Lee’s Famous Recipe Chicken restaurant in Sanford, FL, continuing his personal mantra of offering customers a high-quality great tasting meal at an affordable price.

John’s drive for success extended to civic matters. In the 1970s, John was instrumental in the development of the Central Florida Zoo. Renowned animal expert and former Zoo Director Jack Hanna convinced John to donate $5,000 to the zoo for the purchase of its first elephant, which was affectionately named “Sobik”.

John was a wholehearted, committed Rotarian, and a long time, hard-working, member of the Rotary of Seminole County South, District 6980. John’s community efforts landed him in the “Who’s Who of Seminole County” and considered for a state executive government position.

John loved the outdoors and especially New York’s Adirondack Mountains with its vast natural beauty, and memories of his childhood years. John would spend a large part of each year in the Adirondacks at his cabin in Remsen – hunting, gardening, and developing recipes for future restaurant concepts.

In addition to his love for the restaurant business and mountains, John was devoted to gardening and he had a passion for history. He enjoyed spending casual time with family and friends, and was always up for a visit with an old friend, regardless of the distance of the drive. He lived life to the fullest and he lived life on his terms. To those who knew him he was a force of nature.

A memorial service was held  June 27, at the Cultural Center at Oviedo. 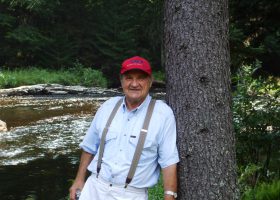