Photo of WWII Veteran Jerry Kinsley with daughter, Patricia, in Orlando, Florida. They are standing in front of a Buick he bought from a dealer on Oakridge Road.

It was wartime so cars were not in production, but the government released two Buicks to an Orlando dealer and Mr. Kinsley purchased one of them.

Veteran Kinsley served in the 90th Naval Construction Battalion in and around Japan. A contractor by profession, Mr. Kinsley was at work building the plant for the atomic bomb when he quit to serve in the military. He saw many boys coming back from the war who had lost limbs and he thought “I got to do something to help”. He went directly to the volunteer office on Orange Avenue in downtown Orlando and volunteered. A week after bootcamp he was in Pearl Harbor: “It was pretty well shot up. I saw a lot of ships on their sides in the harbor.”

Serving in WWII showed him “You can help other people.” He is proud he was a part of WWII and that we did win. He says, “It is unbelievable we could be in the spot we were in with nothing and in a year’s time we got more boats, planes, jeeps than there were in the rest of the world. Pretty good accomplishment for the boys fighting in WWII.” Hear his firsthand account of these historic events.

Mr. Kinsley recalls coming to Orlando in 1939 and marrying his wife, Elizabeth, at Saint James Catholic Church in downtown Orlando in 1941, when it was still a little wooden church. His daughter, Patricia, remembers the beautiful sound her dress shoes made on the church floor. She shares the memories with her husband, Al Stinson, of raising their four children at Saint James Cathedral Church and school.

Mr. Kinsley was the Mayor of Edgewood in the 1950’s and early 1960’s. He shares his delightful story of receiving a phone call from Edgewood resident and noted lawyer, Attorney Fishback, asking him to be the mayor. At the time the Town of Edgewood had six months to revive the town or the state would take it off the books. Here his firsthand account of how Edgewood went from meeting in people’s houses and passing a hat to pay for expenditures to building a Town Hall with tax revenue. In addition to his duties as Mayor of Edgewood, Mr. Kinsley also served as City Engineer and Police Chief.

Search OrlandoMemory.info with the surname “Kinsley” for additional memories and photos. 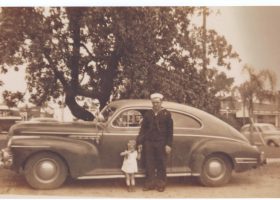 Photo of WWII Veteran Jerry Kinsley with daughter, Patricia, in Orlando, Florida. They are standing in front of a Buick he bought...