Coming from punk’s first wave in the United Kingdom, Adam Ant got his start in a band called Adam and the Ants. They released three albums before Adam Ant went solo in 1982. His first solo album, Friend or Foe was released that same year. Adam Ant performed at the Hard Rock Live in 2019 celebrating the 27th anniversary of this album. He was supported by Glam Skanks, a glam rock band from Hollywood, California.

Besides performing the entire Friend or Foe album, he also played a handful of other songs including Stand and Deliver, Antmusic and Dog Eat Dog, all from his Adam and the Ants days. Although no setlist for the Orlando show appears online, the one for the Miami Beach show appears to be the same. 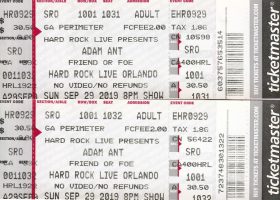 Tickets from the Adam Ant show at the Hard Rock Live Orlando, September 29, 2019. These items are from a personal collection...