From the autobiographical notes of Captain Charles Albertson regarding his career with the New York City Police Department and his travels and adventures after retirement in January 1905.

I arrived in New York City, February 22, 1874 and visited the first day the Grand Central Hotel on Broadway near Bond Street where [“Diamond” or “Jubilee”] Jim Fisk was killed by Ed [Edward S. “Ned”] Stokes some time before. Fisk was president of the Erie Railroad at the time of his death and the locomotive and the coaches were draped in mourning. This left a great impression on my memory.

Many years after a contractor named McMurray who resided in 24th Street, between 8th and 9th Avenues, stated to me that on the afternoon of the murder he was standing in conversation with Stokes, whom he was very intimate with, at 8th avenue and 24th street, when Fiske passed in a cab on his way to the Erie offices in the Grand Opera House building. As he passed Stokes said, “That scoundrel will be dead before night.” This would have convicted Stokes of murder in the first degree which is punishable with death. After several trials he was convicted of manslaughter and served about four years and later was proprietor of the Hoffman House at Broadway and 26th Street for many years. When he came out of prison his hair was as white as snow while he was under middle age.

After arriving in New York I became intimately acquainted with a man named Parker who kept a bakery on the west side of 8th Avenue, between 25th and 26th Streets. He informed me that at the time of the 12th of July riot a short time before Fisk’s death, he turned out with his regiment of which he was Colonel, to preserve order but when he ordered the mob to disperse they failed to do so, and when the bullets got to buzzing good and plenty, the gallant Colonel [Fisk] took refuge in Mr. Parker’s bake shop which was in the basement of the building where he remained all night. Mr. Parker secured him a suit of civilian clothes which he put on and escaped over a back fence and came out in 26th Street, where a carriage was waiting for him, and he took a vacation in Long Branch. 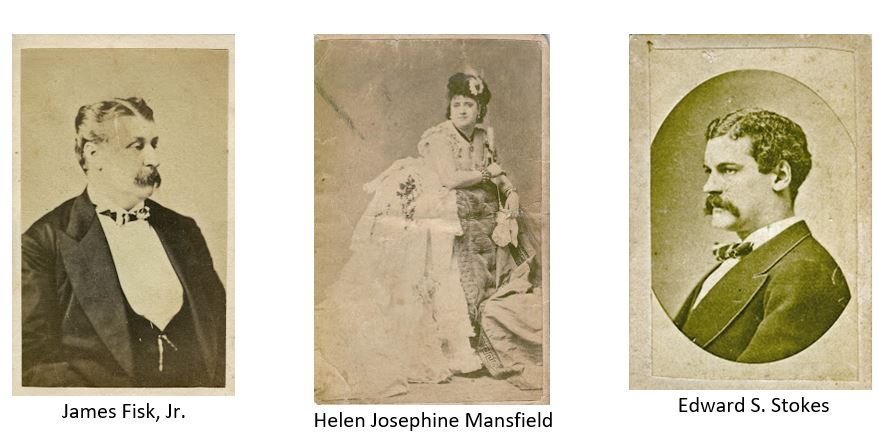 The famous or rather notorious Josie Mansfield who caused the trouble between Fisk and Stokes lived for several years in a large, fine house in west 23rd Street, about 357 or 359, east of where Lilly Langtry later lived. Mrs. Mansfield was a large individual far from handsome. Her husband, years after the tragedy, was a bar tender in 30th Street near Broadway. He said, “The greatest piece of good luck he ever had was when his Josie wandered away.”

As far as Josie Mansfield description goes, in September 1872, Mansfield applied for a passport. Her passport application describes her as 5 feet 5 ½ inches tall with a high forehead, an aquiline nose, a small mouth, dark brown hair, a light complexion, and an oval face. Read more about the assassination of Colonel James Fisk Jr. http://coxrail.blogspot.com/2009/06/assassination-of-colonel-james-fisk-jr.html