Gogol Bordello is a popular “gypsy punk” group, as they call themselves, with members coming from many different parts of the world, although their sound is most influenced by the folk music of Eastern Europe and punk.

They played at the Beacham on March 28th, 2019. They were supported by NuFolk Rebel Alliance, which also features members of Gogol Bordello.

The setlist for the show is here, stained by wine which lead singer and guitarist Eugene Hütz had at the beginning of the show. 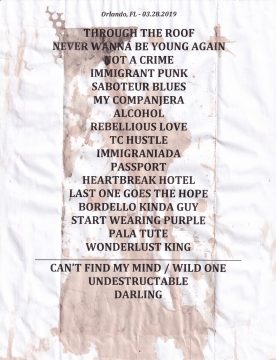 These items are from a personal collection and scanned with permission.