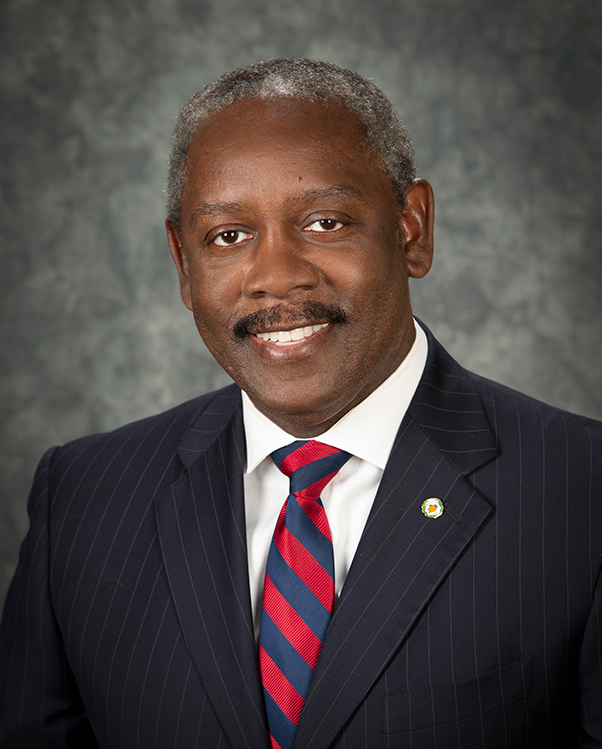 Our presenter today Mayor Demings some of you may know, or maybe you don’t know, that Mayor Demings graduated from Jones High School. And we know that Jones High School has a great legacy in our community. One legacy some of you may recall is that during one of the bleakest periods in world history, it was Jones High School that gave generously to contribute to the relief effort in Europe after WWII when Europe was devastated by the Nazis. So it was in 1946 that The Orlando Plan was initiated and Orlando became the first city in the country to offer relief to another city in Europe. 68,000 lives were saved through that relief effort through a community food drive, and Jones High School gave more in a single week than all of Orlando that’s documented. And thanks to the archives of the Camichos Family we’re able to share these archives with others and honor that history.

We’ve had previous speakers for Orlando Remembered Black History Month. Father Pinder honored us with sharing his oral history on the experience of collaborating – the collaborative effort between the police department and civic leaders to bring about peaceful integration in Orlando. We are grateful for that legacy and we welcome Mayor Demings who is here today.

Mayor Demings’s goal is to make Orange County the “Experimental Prototype Community of Tomorrow” by creating a community culture of innovation, collaboration, and inclusiveness. Today, because of the technological infrastructure that people who live in this community, who worked at Lockheed Martin created, we enjoy great technology. And, we are able to meet virtually today, and meet our brilliant Mayor Jerry Demings who is going to speak to us today. Please join me everyone in warmly welcoming Mayor Demings.

Well, first let me begin by saying thank you for that wonderful introduction. I’m honored to be here and I’m from this community. I was born and raised in the Orlando area in the 1950’s and I am the youngest of five children. And so, I honor my parents who really kind of instilled in me this desire to be of service to others. And so, this morning what I’ll do is just talk to you a little about these last forty years of public service and then I’ll give you an opportunity to perhaps ask me any questions about family or things we talked about.

So first, growing up here in this community primarily in the 60’s and 70’s, it was a different community then. My parents were just two humble individuals. They were blue collar workers in this community. My mother, she is from Gadsden County in the city of Havana and she moved here in 1941. And my father who was born and raised in Alabama, southern Alabama, he moved here in 1939. The two of them met around 1942. They got married in 1944. And my parents were married until my mother passed.

My mother died about three years ago. She was 95 plus at the time that she passed. And what she did for a living, she did what was called “days work” at the time. She would clean, which means she would clean a different house everyday for people who could afford to pay someone to come in and clean their homes. So she was essentially a maid, that’s how she made her living.

My siblings and I grew up in the Orange County Public Schools. And I initially went to the public school at Richmond Heights Elementary School back in 1963 and I was there the first year that the school opened up. And then I went to Memorial School at the time.

Of course you remember that with Orange County Public Schools, the desegregation was essentially signed in 1968 and they really began the process of desegregating the schools. I went to Memorial Junior High School and was bused there. I played sports: football, basketball, and I ran track. So as a student athlete, I always made pretty decent grades. I was inducted into the Honor Society in ninth grade.

My oldest brother was, had a troubled life. My oldest brother graduated from Jones High School in 1967 and he went off to the big city. He went off to New Jersey, to Newark, Newark, New Jersey, and found heroin; and lived the better part of his adult life addicted to some type of substance. My mother, he was five, ten years older than my twin brother and I, so my mother did not want us following that path.

My mother made certain that we were in the Boy Scouts and other organizations. And as a family, we were a family of faith and she made certain that we went to church. We spent a lot of time in church. We went to a Methodist Church. And then my next sister, she went on and became a nurse. She was a nurse for about 40 years. She died a few years ago. She died suddenly of a brain aneurysm. My brother, my oldest brother died in 1995. He had just turned 50 year old. Because he had been addicted to substances so long, he had wrecked his body.

Degree in Finance and Accounting from Florida State University

So people ask me about how did I end up in law enforcement? Because at Florida State University, I got a degree in Finance and Accounting, moved back to Orlando in 1980 and started my career as an accountant. Worked for a firm that did a lot of work for Disney at the time. And while I was at Connick, I was heavily recruited however by the federal government, the FBI and the CIA. They were looking for some people with some finance and accounting backgrounds to take on more white collar types of crime.

But the federal government went into a hiring freeze and our county went into a little bit of a recession at the time and so while I was pursuing that job with the federal government, the recruiter told me that it would be great if I went and got some local law enforcement experience, so that when they came off the hiring freeze with my experience working in accounting, the degrees, and with the law enforcement, and my background, it would enhance my probability of getting hired.

I really fell in love with the job that I was doing in my own community and I made a choice to stay in my community.

So I honestly ended up at the Orlando Police Department and I thought that I would stay there for a year and move on to the federal government. But I really fell in love with the job that I was doing in my own community and I made a choice to stay in my community. And the Feds ultimately called me about the job. I turned it down.

Of course, I met my bride at the Orlando Police Department. Although we both went to Florida State University together, we didn’t know each other then. She majored in criminology and ironically, my twin brother majored in criminology. But he’s spent the last 48 years in business and I spent the last 48 years in public service. I spent about 38 years in law enforcement. I had the privilege to do a lot of things at the Orlando Police Department. I had great mentors who mentored me and who gave me the opportunity to lead in various roles. And I was unable to take the various tests and obviously I passed every one of them.

When I was offered the opportunity to go to work for Richard Crotty who was the third elected Mayor of Orange County, I went to work for him as a Deputy County Administrator and Director of Public Safety. I had oversight for the Fire Department, Jail, and some other programs and departments, about 3200 employees. I got to deal with issues like my ten year’s Chief and Director of Public Safety.

I got to deal with issues related to September 11, 2001. There was some connection to the Orlando International Airport. Several of the hijackers originated their flights from here. Their cars were parked at our airport, so we were pulled in to the events of September 11.

I got to deal with the hurricane season. We had three hurricanes in 2004: Hurricanes Charley, Jeanne, and Frances. I had high profile visibility from that. I got to be the interim jail director for Andrew. I held the job for the county for about seven months and at some point, a group of people kind of recruited me to run for Sheriff.

And I made the decision in September of 2007 that I would announce my intent to run for Sheriff in the 2008 election. I left the county in January 2008 and ran for Sheriff in November 2008. I was elected as the 28th elected Sheriff in Orange County. And I went to the Orange County Sheriff’s Office and I won three general elections. And I had a great career during that period of time. I got to be involved in high profile cases like the Casey Anthony trial. I got to deal with the Pulse nightclub situation, other weather phenomena, and a lot of other things during my tenure as Sheriff.

And so, I taught it for about 25 years. I studied it, crisis management. You know, ultimately I was able to complete the FBI Academy with some of the best and brightest from around the world. Had the opportunity to go to Harvard and study with government experts from around the world as well. And so, it made me well suited. And I humbly say that because of the sum total of all those experiences, I can approach the job before me with a certain confidence, a certain competency, and humility to do the job that we do today.

And so, my wife along the way, we have three kids, we have a set of twin sons. One of my twin sons is Battalion Chief in Orange County Fire Department. Another twin son is a business man in the area. And my youngest son was a school teacher for about six years, but he is now completing the Fire Academy. He is transitioning into public service.

And my wife in 2007 was appointed by Mayor Buddy Dyer as the Chief of Police in Orlando. She was elected to Congress in 2016. She was sworn in January 2017. She just got elected to her third term in Congress, and you all have seen her. She does some high profile things. She had the opportunity to be vetted this past spring and summer as a potential Democratic vice presidential nominee that put our family square in the middle of a lot of politics; a very thorough process that we had to go through for that. God didn’t choose her for that role at that time, so that just means that he has something else for her to do.

Committed to Being of Service to Other People

And so, that’s a little bit about our family. I’ve crossed the bridge of my journey, hopefully in some of that you understand what has motivated me to do the work that we do. And for the balance of my time in public life, I’m going to remain committed to being of service to other people.  So, I’ll stop now and I’ll give you an opportunity to perhaps ask me any questions that you may choose to ask. 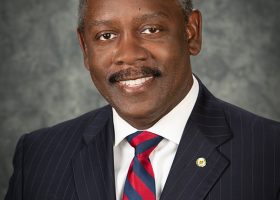