Passionate screams and clashing swords echo through the Dr. Phillips Center for Performing Arts. And not all of that sturm and drang has come from the rehearsal hall in recent months.

Fresh from The Marriage of Figaro in Germany, and then Tosca in Tulsa, Okla., director Robert Swedberg has returned to his artistic home of 17 years to direct Don Giovanni for the Nov. 16-20 opener in the 50th-anniversary season of the Orlando Opera Company.

The melodrama about passion and power based on the Don Juan legend — with music by Wolfgang Amadeus Mozart — would seem a fit vehicle for Swedberg’s homecoming, which offers no little operatic drama in itself.

Swedberg, 57, spent years planning the 50th anniversary only to abruptly resign as the opera’s general director in April. He would not discuss his departure.

“I have agreed . . . to say nothing disparaging about the new regime at Orlando Opera. So, I am not,” he wrote in an e-mail to friends upon quitting.

His hasty exit came just nine months after a tumultuous period in top management at the opera, which resulted in the board creating a new position of CEO and president, then hiring James Ireland for that job. The 40-year opera veteran can be charming and combative in equal measures, depending on whether he is dealing with opera board members, benefactors, young performers or members of the press.

Ireland “is quite honest and sometimes a bit more forthright than some people would like to see or hear,” says Dr. Mitch Levin, chairman of the 35-member Orlando Opera Board of Trustees.

The new head of the opera scrapped Swedberg’s position upon his departure and assumed his responsibilities. “The best operas have one person at the helm in charge of everything,” says Ireland, 63. At the time of his departure, Swedberg surprised many by agreeing to return and direct the opening performance for the 50th-anniversary season, which he had planned and cast. So, once again, Swedberg’s Mazda minivan bearing “Opera 1” license plates is parked at the Phillips Center. Friends and family say the unflashy ride is another fit vehicle for the opera-loving, bass-fishing yoga master. His fans describe him as humble but driven to deliver the goods. “That’s the essential Bob. He is one of the most grounded individuals in opera,” says soprano Carol Vaness, one of many top performers Swedberg lured to Orlando. Even Ireland credits the popular impresario with taking the opera company up “a notch” artistically and for putting it on the map with its pioneering educational and outreach activities. Swedberg also was key in creating the Orlando Philharmonic Orchestra after the financial failure of the Florida Symphony in the 1990s. And Margot Knight, president of United Arts of Central Florida, who sometimes tussled with Swedberg over finances, expressed regrets at the departure of the “internationally known director.”

“Some may say Robert is difficult, but they don’t know what it takes to do what he does through his devotion and passion,” says Knight. “The Orlando Opera Company has been the top-ranked music organization in the state year in and year out because of Robert’s artistic leadership.”

If his departure has caused him stress, Swedberg wears it well. He attributes his youthful vigor to yoga, which he took up recently with typical zeal. Not content to be a recreational yogi, he practices almost every day, even when he travels, says his daughter Olivia, 24, a music therapist in Tallahassee. He also created his own yoga DVD with original music based on opera arias, which he uses to teach yoga classes for performers all over the country. Swedberg is adept at finding creative ways to draw a crowd so he can share his passions. In 2003, he cast the Orlando Magic dancers and Cirque du Soleil-style acrobats in a production of Carmina Burana that sold out every performance and drew something rare for local opera — scalpers.

A California native, Swedberg first sang in the choir of a North Hollywood Baptist church where his insurance agent father was a deacon. Yet, it was his tuba talent that won him a full scholarship to California State University, Northridge. He switched to voice and theater after learning about the school’s strong opera program. He sang bass-baritone in more than 16 college performances before going pro to become a director and “crusader for opera as good theater.”

The free-spirited impresario, who belted out the theme to the Batman television series for his high-school choir audition, has planned some trademark twists for Don Giovanni audiences, too. He spent hours in rehearsals coaching performers Peter Edelmann (Don Giovanni) and Inna Dukach (Donna Anna) to steam up a 13-minute scene with ardent cries not heard by large audiences since When Harry Met Sally.

“With the right performers and a healthy rehearsal environment, magic happens!” says the director, whose wife, Melissa, is a professional viola player. Though the original Don Giovanni is set in early-17th century Spain, Swedberg relocated and updated it slightly, setting it in New Orleans in the late 1700s.

“We wanted a more vivid connection and since there is an aura of the supernatural in the piece, what better place than spooky New Orleans — home of Mardi Gras, masked balls and voodoo?” he says.

The director also hinted that there will be some Dante-esque dancers performing in the opera’s final scene featuring “the most vivid depiction of hell” ever unleashed in Orlando outside of International Drive in tourist season. After the curtain closes on the last of three Don Giovanni performances, Swedberg will fold up his director’s chair and hit the road. He already is booked to direct La Traviata in Naples, The Bear in Italy, and Nabucco in Germany.

Swedberg also hopes to expand his yoga practice with a book and seminars for performers. And if you happen to be floating along the St. Johns and you meet a goateed guy in a bass boat crooning Ol’ Man River — or the Batman theme — you’ll know that Orlando’s Opera Man has simply gone fishin’. 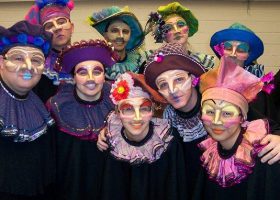