Sarah Palin supporters began lining up at the Barnes and Noble at Colonel Drive and Bumby around 8 p.m. on Monday, November 23rd. By 6 a.m., November 24th  there were about 400 people in a line that completely circled the building and finally had to be rerouted to the alley behind the building and around an adjacent building. When Barnes and Noble opened at 9 a.m., there were about 700 people in line. My daughter and I finally received our wristbands at 10:45, just in time for me to get to work! 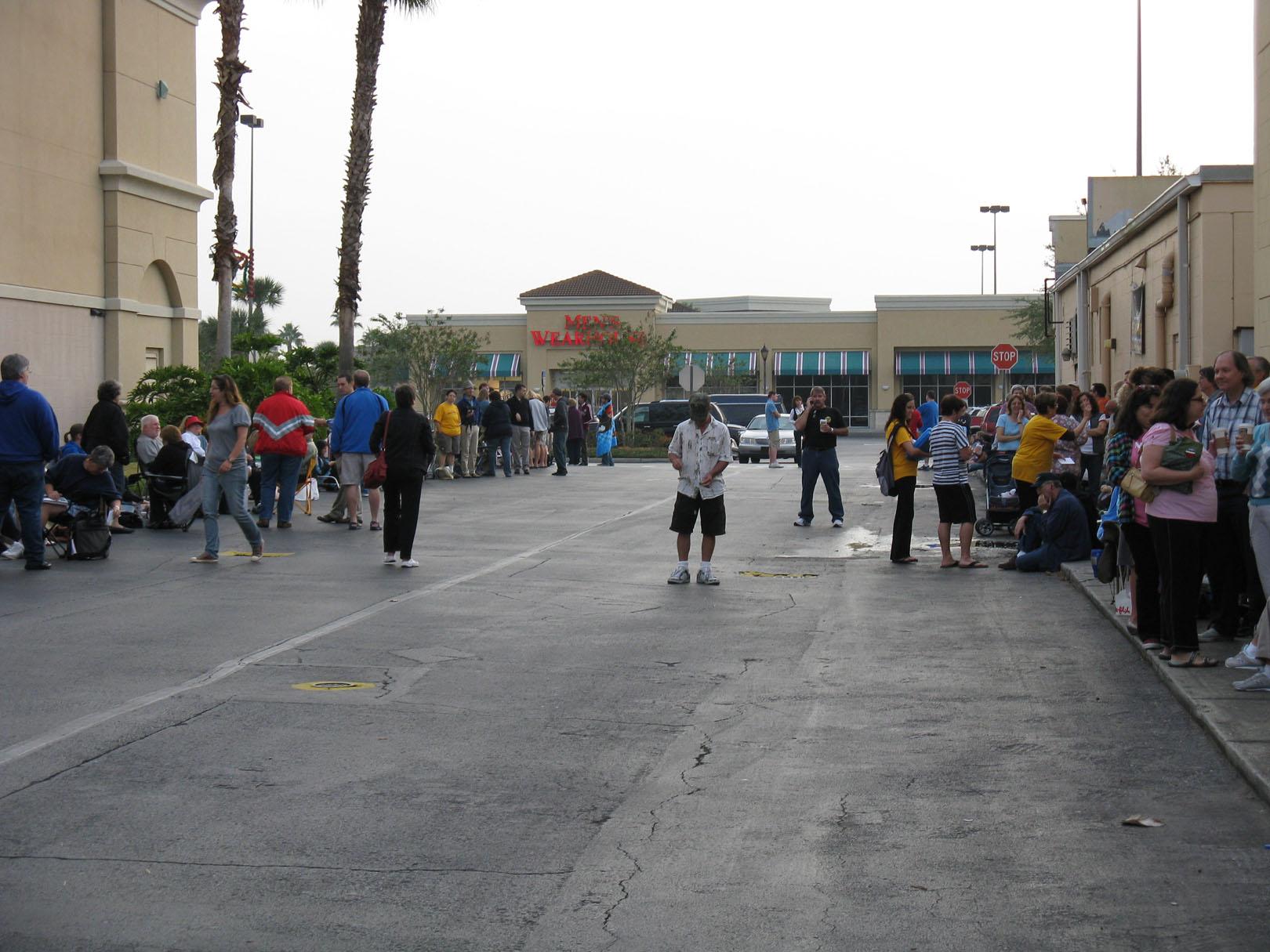 All the local news organizations were there along with a news helicopter from Channel 6 – WKMG Television. A reporter from Channel 6 interviewed a young lady and two older ladies who were standing next to us in line. The young lady interviewed was awesome! Lainie was articulate and informed and answered several questions about Sarah Palin, however, Channel 6 News used just a snippet of the conversation in the video report. Lainie was asked if Sarah Palin was worth the wait and she responded in the affirmative, adding “Not many people support her, but the smart people do, and that’s why I’m here.” Video of the interview was on the noon news and Channel 6’s web site. I gave Lainie a pocket size copy of the Declaration of Independence and Constitution from the Heritage Foundation and an American flag pin.

The two older ladies were interviewed next. .One of the ladies was celebrating her birthday that day. Her friend had bought two copies of the book “Going Rogue” and only told her that where they were going was a surprise. She agreed to be picked up at 5:30 a.m. and waited in line with her friend for 4 1/2 hours to get an armband!

My daughter and I returned to Barnes and Noble about 6 p.m. and made our way back to the line in a driving rain. News trucks from all the local stations including the local Spanish language station dotted the parking lot and reporters made their way through the crowd. We finally met Governor Palin at about 8:10 p.m. Her Aunt Katie Johnson greeted everyone warmly as we approached the table, thanking us for coming and shaking our hand.  Governor Palin took the time to shake each person’s hand and respond to each greeting. Her Mom and Dad (Sally and Chuck Heath) flanked the down escalator shaking hands and thanking us for standing in line so long to see their daughter. Here we are meeting Governor Palin. 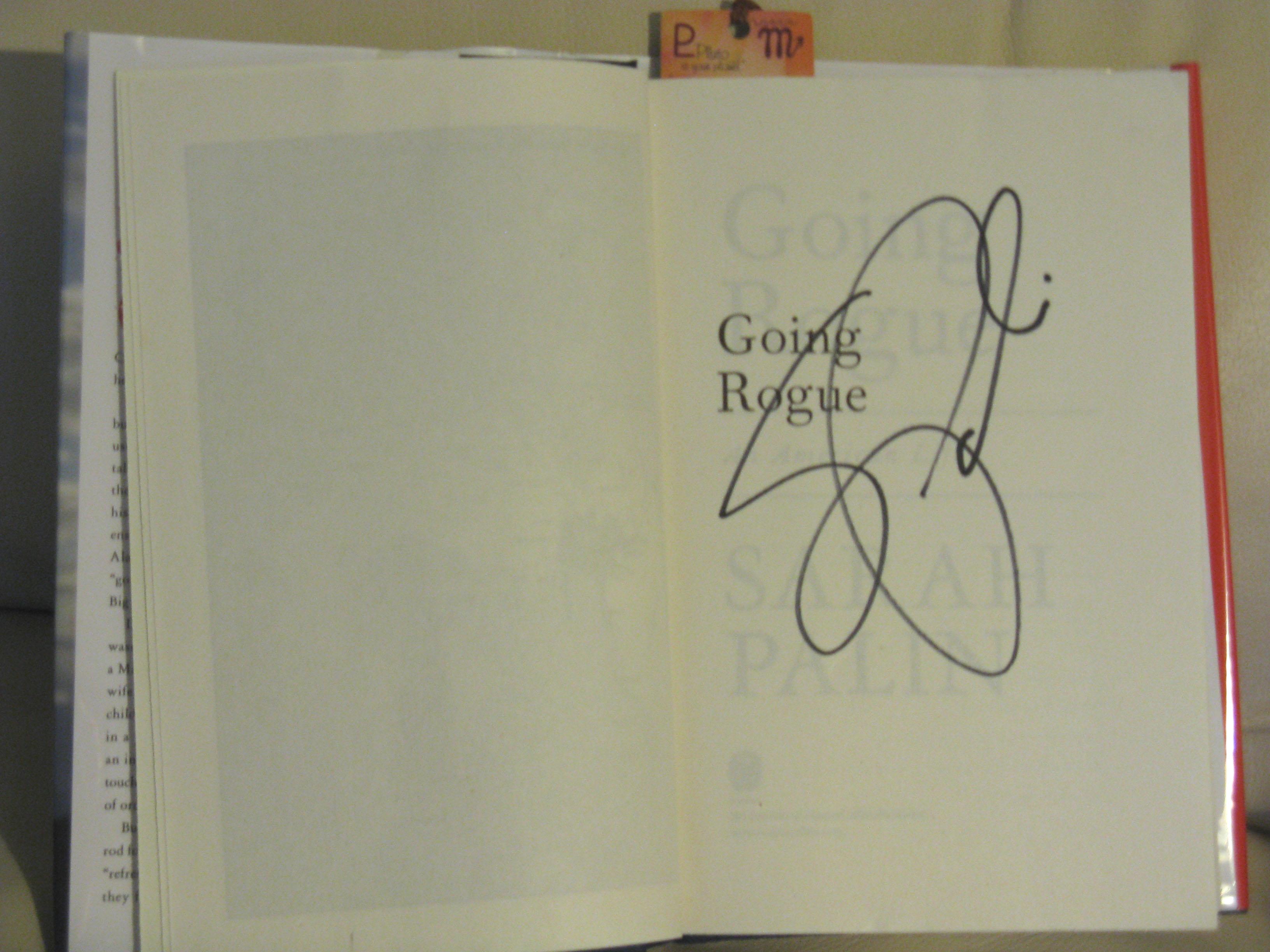 I thanked Governor Palin for everything she is doing for our country and told her that I pray for her and her family every night. She thanked me and said it meant a lot to her that I include her and her family in my prayers. I thanked her parents for blessing our country with their daughter and raising her with morals, values, and an appreciation for our Constitution and our Freedom. They were gracious and kind in their responses. Governor Palin is indeed fortunate to be surrounded by such a warm, genuine, strong American family!

Security was extremely high for the event: we could not approach the bus which was parked behind the store in an alley between Barnes and Noble and a tire store. We were also, not allowed to bring any bags (including pocketbooks) upstairs to the signing area, and no photos were allowed. However, Governor Palin brought her own professional photographer to take photos of each person as she greeted them and they will be posted online so they can be downloaded free of charge!

This is a time lapsed video of all the people who waited in line to get autographs and meet Sarah Palin. If you notice the lady on the far left in the white t shirt – that is Sarah’s aunt. If you notice the white haired man on the far right – that is Sarah’s father.  You will notice that the local news media were allowed to take photos only. You will see them in the background in the first few seconds of the video. It is really hard to see individuals in the video because of the fast pace, however, if you stop and start the video around 33 seconds in, you will see me in a flowered dress and my daughter (much shorter) just behind me. Here’s the frame. The “credits” image at the end confirms that the little girl I thought was Piper Palin was she. 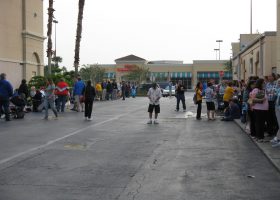 Around 6:30 a.m., the line of people completely encircled the Barnes and Noble building. To allow for the people who continued to... 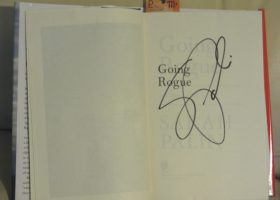 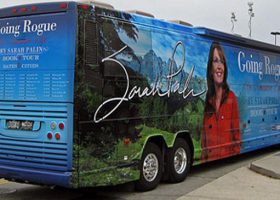 This image is from a time lapsed video of all the people who waited in line to get autographs and meet Governor Palin found on youtube.com. It is really hard to see individuals in the video because of the fast pace, however, if you stop and start the video around 33 seconds in, you will see me in a flowered dress and my daughter (much shorter) just behind me.

I saved a screen shot of the video to capture my daughter and me as we approached the table to meet Governor Palin.

Photos of Ashley and me meeting Sarah Palin November 24, 2009 at Barnes and Noble in Orlando, taken by photographer Sheleah Craighead http://www.photoshelter.com/c/shealahcraighead