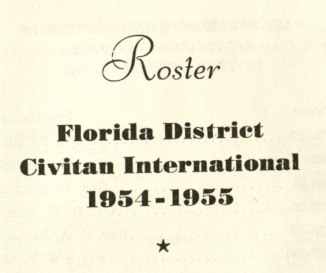 1954-1955 Roster for the Florida District of Civitan International contains members names as well as employers names, addresses and phone numbers. The 70 page booklet lists past presidents and governors of the Florida District from 1922 through 1954, District Committees (including the Fruit Cake Committee!), and the officers, directors and members of each club in Florida.

The complete roster of Orlando club members can be found on pages 42-47. The roster is located in the Orange County Associations file at the Orlando Public Library or you may peruse it here.

The roster of members belonging to the Orlando chapter can be found on pages 42-47. The roster is part of the Orange County Associations file at the Orlando Public Library.