On February 15, 1959,  Archbishop  Joseph Patrick  Hurley dedicated the school’s first permanent building, which is still being used today for classrooms.  A social hall and four new classrooms along with a convent for the sisters were completed by May of 1962 and the enrollment had increased to 600 students. 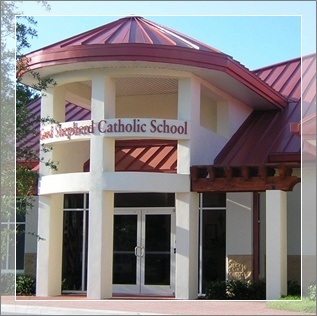 In 1955, ground breaking took place for Good Shepherd Mission Church. The church was brought about by the foresight and labors of Monsignor John G. Bishop. The first Mass was celebrated on March 18, 1956 by Rev. Roman S. Gromala.

In 1956, while awaiting completion of three new portables, Principal, Sister Mary Dorothea and the Sisters of St. Joseph held classes in the church. Later that same year, Bishop Thomas J. McDonough dedicated Good Shepherd School. The school was comprised of three portables, and it housed 150 students, grades Kindergarten through fourth. From September 1956 to June of 1963, the Sisters of St. Joseph staffed the school under the leadership of Sister Mary Dorothea, S.S.J.

The first permanent school wing was blessed and dedicated by Archbishop Hurley on February 15, 1959. The two-story building is still being used today for classrooms. By May of 1962, four new classrooms, a social hall and a convent were completed. Enrollment climbed to 600 students.

The Sisters of Notre Dame began to staff the school in August of 1963, under the guidance of Principal, Sister Mary Mercita. During the years that followed, the main emphasis of parish life centered on the school, with a Learning Center and Reading Room added.

From 1976 to 1981, the school continued to meet the needs of a population that dropped to 300 students under the leadership of Sister Rosemary Conlon and Mrs. Lynn Nasrallah. In 1981, the Missionaries of Our Lady of LaSalette received responsibility for the Parish and under Rev. Camillo “Sonny” Avitabile, M.S., and Principal, Patricia A. McNamee, the school prospered.

In 1983, a preschool program for three and four year olds and an after-school program were begun. In 1990, the preschool enrollment had reached 90 students from age two to four. Due to the growth of the program the decision was made to establish separate governance for the preschool. Sister Diane McMeekin, O.P., was asked to be the Director of the preschool which would be coordinated with parish administration. In that same year, the school began an expansion project by adding an additional kindergarten class.

In 1995, the Good Shepherd School Foundation was established and committed to raising funds from outside the school community to support scholarships and technology. 50% of all funds raised were placed in an endowment fund. The Foundation, through the help of Rev. Sonny Avitabile, secured a 1.3 million dollar pledge to build a media center, administrative offices, a state-of-the-art science laboratory, a technologically advanced computer laboratory, and middle school classrooms.

In 2000, Good Shepherd was awarded Catholic Schools for Tomorrow Innovations in Technology Award.

Good Shepherd School continued to grow in 2003 with the ground breaking of the new building. A 17,000 square foot learning center was dedicated on March 6, 2004.

Today, Good Shepherd School continues to grow and flourish with 663 students representing the vibrant community of Orlando, Florida. Without even entering a building, one can sense the essence of Good Shepherd by reading the motto that is painted on the wall for all to see. 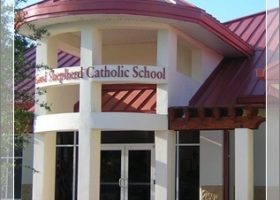