A Condensed History of the Third Friday Book Club from 1954 to 2010, written by Mrs. James C. Robinson the former Elizabeth “Betty” Thornton, a member since 1977, provides a glimpse of the club’s activities and books reviewed from June 1954 to 2010. The history of the club dates back even further to around 1943, according the long time member Eleanor Yothers Fisher in an article published in the Orlando Sentinel on July 5, 2015.

Meetings were, and still are, usually conducted at club members’ homes on the third Friday of the month. In 1954, the club met every month except August, but later met from October to May. Meetings sometimes included luncheons at the Orlando Country Club and outings like the April 15, 1983 visit to Cross Creek – Marjorie Kinnan Rawlings’ homestead near Gainesville.

The history of the club is documented in notebooks maintained by the club’s secretaries since June 1954. The entries sometimes provide little more than date, reviewer and hostess, and other times provide great details. One such notation pertaining to preparations for the Christmas party to be held on December 13, 1985, made me chuckle. The members were assigned or volunteered to procure specific types of food for the event. The Orlando Public Library’s former director Clara E. Wendel and her sister Edna Buckman, along with Edna Miller, where in charge of the wine.

The meeting notes, recorded by the club’s Secretaries beginning in 1954, record members sharing their travel adventures and slides of faraway places like Mrs. Ruth Maguire’s May 18, 1972, talk on her African journey and Edith Beardall’s talk at the December 1960 meeting on her presentation at British Court. Other meetings featured guest speakers like Library Director Dorothy Field, and authors like Don Whitehead who discussed his book A Story of the F.B.I.

We see the march of time through something as simple as members’ telephone numbers. From GA 4-0123 to 424-0123 to including the area code 407.424.1023 and from the more touching-changes in address. As an example: Mrs. Bert (Florence “Flo”) Neidig begins at home on Nela Avenue, moves 16 years later to Westminster Towers on Lucerne Circle, and finally is mentioned in this 2010 notation: “Deceased: Flo Neidig 10/3/10. Memorial sent to Orlando Public Library.”

The brief notes carefully recorded by the club’s secretaries provide a mere glimpse into what was, and still is, the monthly meetings of a group of intelligent, thoughtful, well-read, well-traveled women who have enjoyed each other’s company and been positive forces in the life of their community.

Hat’s off to the Third Friday Book Club – may you read on forever!

Obituaries for many of the members can be found at EpochLegacies.org  To locate all members with tributes, use FIND and type “third friday” in quotes in the KEYWORD field.

Peruse the IMAGES and DOCUMENTS under Attachments below. 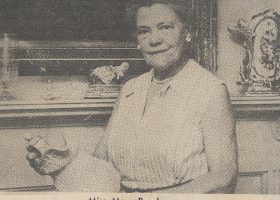 Mary Branham was born and raised here. She was a local teacher, historian, lecturer and social leader, and a member of the...

Informational sheet on Clara Wendell and the Albertson Public Library.

Jim Robinson and Betty Thornton in their 1940 Orlando Senior School Yearbook - Most likely to succeed. She was a member of... 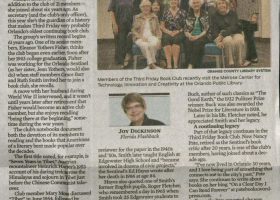 The Third Friday Book Club was featured in the July 5, 2015 edition of the Florida Flashback in the Orlando Sentinel. Sentinel...

Mary Branham was born here in 1889, graduated from Rollins College with an A. B. degree. She lived on campus during the week and often came home for the weekends, by train!

This article appeared in the June 28, 1959 edition of the Orlando Sentinel-Star. More articles about Mary Branham are available in the Biography Vertical Files in the Orlando Public Library.

3rd FriBkClubHistoryRobinson.pdf
A Condensed History of the Third Friday Book Club from 1954 to 2010

Created by Mrs. James C. Robinson, the former Elizabeth "Betty" Thornton, "A Condensed History of the Third Friday Book Club From 1954-2010" provides us with a glimpse of the club's activities and the books reviewed from June 1954 to 2010, with some minor gaps.

The history is pulled from meeting notes and membership lists found in the small notebooks maintained each year by the club's secretary. There are three notebooks encompassing the following dates: June 1954 to 1979, 1980 to 2013, and 2013 forward.

A page inserted in the front of the second book includes a list of the duties to be performed by the Secretary of the club, a position that rotated alphabetically annually.

Duties:
1-Check with hostess and reviewer 1 mo. in advance - (Oct.-May)
2-Send card to each member 10 days in advance (Oct.-May)
3-Request new cards in Oct.
4-Initiate arrangements for Christmas luncheon.
5-Pass sign-up sheet for hostesses and reviewers for coming Oct.- May, in May of preceding year.


Betty Robinson, in her history of the club, added:
5-Ask for substitutes at the bottom of the page for both hostess and reviewer.
6-Keep the record of meetings in the little black book.
7-Collect money for stamps as needed.

Alphabetical listing of Third Friday Book Club Members culled from the 1954-2015 Secretary notebooks. Includes first and last time name appears in the notebooks and any other special mentions.

PLEASE NOTE: Personal information pertaining to addresses and telephone numbers have been omitted and will remain unpublished for at least 50 years.

PLEASE NOTE: Personal information pertaining to addresses and telephone numbers have been omitted and will remain unpublished for at least 50 years. This may result in membership lists being omitted.

PLEASE NOTE: Personal information pertaining to addresses and telephone numbers have been omitted and will remain unpublished for at least 50 years.