The website goes on to mention that in the 1960s the name of the organization was changed to the Orange County League of Women Voters and the organization opened its membership to men as well as women.

The League of Women Voters file at the Orlando Public Library contains several membership booklets which include lists of members, officers, directors, general meetings, discussion group meetings and goals for the year. The oldest in the file is the 1950-1951 booklet. It features this statement on the cover:

“The League of Women Voters, believing in the dignity of the individual, and that freedom and prosperity can be stably maintained within our democratic society, works unremittingly to promote political responsibility through informed and active participation of citizens in government, to the end that ‘government of the people, by the people, and for the people shall not perish from the earth.’ The League carries out this purpose through its Voters Service and local, state and national programs.”

The ladies’ names in the early booklets are presented as “Mrs. + husband’s name” as was common and considered polite and appropriate in that era. Should you wish to identify any of these ladies, check the city directories in the Reference Collection at the Orlando Public Library. You may access the League of Women Voters file at the library in Downtown Orlando or peruse the 1950-1951 booklet here. 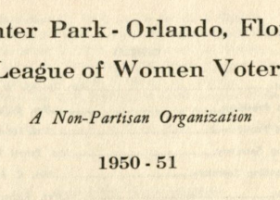 This item and booklets from other years can be found in the Orange County - Organizations - League of Women Voters file at the Orlando Public Library or you can peruse it here.