Above photo of Clara Davis Warren from the Florida Catholic, April 2, 1982. Photo and article by Sister Elizabeth Crean. Permission granted.

When Clara Davis Warren departed this life on October 15, 1987, she left a legacy that lives on in the thousands of lives she touched along the way, and those who were inspired to do as she did.

A memorial service for Clara was held at the Winter Park Community Center on Saturday, October 17, 1987, followed on Sunday, October 18th by a celebration of her life at St. Elizabeth Church of God by Faith, after which she was laid to rest in Edgewood Cemetery in Apopka.

During her life of service to others, C.D. Warren worked nights and weekends, providing food, clothing, shelter, furniture, childcare, transportation and counseling to those in need.

Clara Lee Elizabeth Davis was born in Apopka, Florida, on February 26, 1925. The 1940 U.S. Census shows Clara, her husband James Wagner, and their 2-month-old daughter Elizabeth residing with Clara’s parents Walter and Julia Davis and her siblings Helen, Walter, James and Leroy in Apopka.

The 1945 Florida Census shows Clara with her 2nd husband Charles Warren and her two children Elizabeth and Nehemiah Wagner still residing with her parents in Apopka.

An article written by Dick Burdette around 1981, shared the story of Walter and Julia Davis, and the generosity and selflessness they passed on to their daughter.

“Walter and Julia Davis understood better than most what hunger and despair did to folks.” During the Great Depression, in addition to clearing land or clerking in a store, Walter planted 10 acres of vegetables, and he went fishing every chance he got. Walter and Julia sold vegetables, fish, fresh milk and butter for pennies to those who could pay but gave them to those who could not.

“And like them, she [their daughter, C.D. Warren] has been giving food away to the needy here in Apopka as long as anybody can remember. And as was true for her parents, this business of giving does not come easy… But C.D. Warren, who over the years has worked in the fields and as a domestic and taken in laundry, continues to make giving her real life’s work…”

Around 1945, Clara moved to Southern California, where she resided for about ten years, working as a housekeeper. Upon returning to Central Florida, she cared for her elderly parents and supported her family as a domestic, caring for migrant workers, and working on the janitorial staff at the local school.

The 1966 directory identifies 453 Carolina Avenue as the location of “Traveler’s Rest” furnished rooms run by Mrs. Clara E. Warren. The rooming house was eventually renamed “Manna on the Road”.

In the beginning, Clara handed out food from her home in Apopka, using her own money earned by cleaning houses and taking in laundry. She frequented local food stores, bakeries and roadside stands, soliciting bent cans, day old baked goods, and blemished fruits and vegetables.

As her works became known, donations increased, and volunteers conducted food drives increasing the number of people she was able to feed.

In 1976, Apopka resident Katherine Parten, gave Clara a badly needed freezer, and others helped her prepare meals and distribute food to those in need.

In May 1978, after many years of helping the needy out of her home, Clara founded the non-profit Central Florida Food Bank, Inc., which was chartered in the State of Florida on October 16, 1979.

Author Dick Burdette wrote around 1981 that shortly after her non-profit was incorporated, members of the community were the first to offer assistance.

“C.D. Warren isn’t shouldering the burden alone anymore… In this city’s black community, others — lots of volunteers gather aluminum cans and old newspapers… Still others are volunteer fishermen. Whatever they catch goes to the food fund, too.”

A December 18, 1981, article in the Apopka Chief, states that the food bank was originally operated out of a large building on 18th Street in Apopka but due to high rent and utilities had to relocate to 105 Rosa. 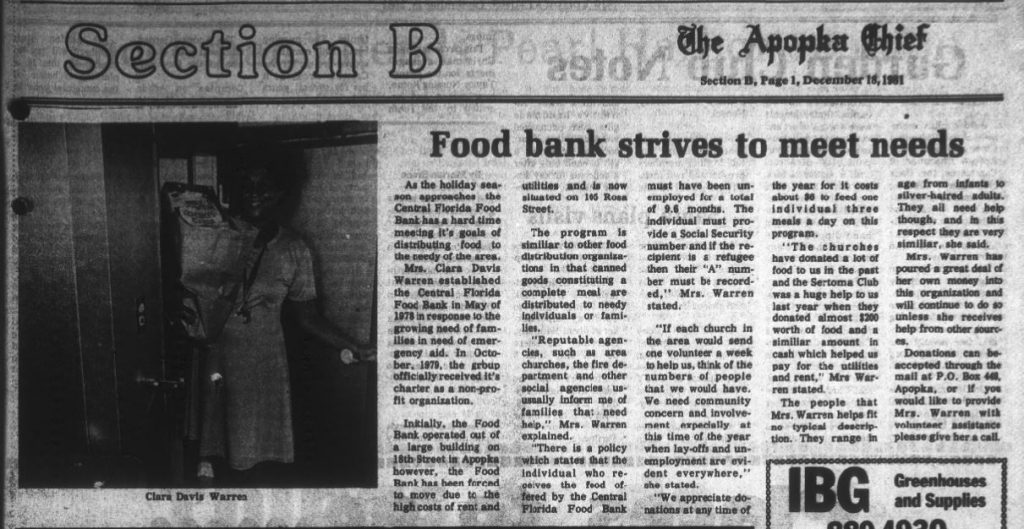 Clara was referred to as “a diminutive dynamo” by Sister Elizabeth Crean in “A vision of manna, people. What one little woman can do – and did,” in the April 2, 1982, Florida Catholic. 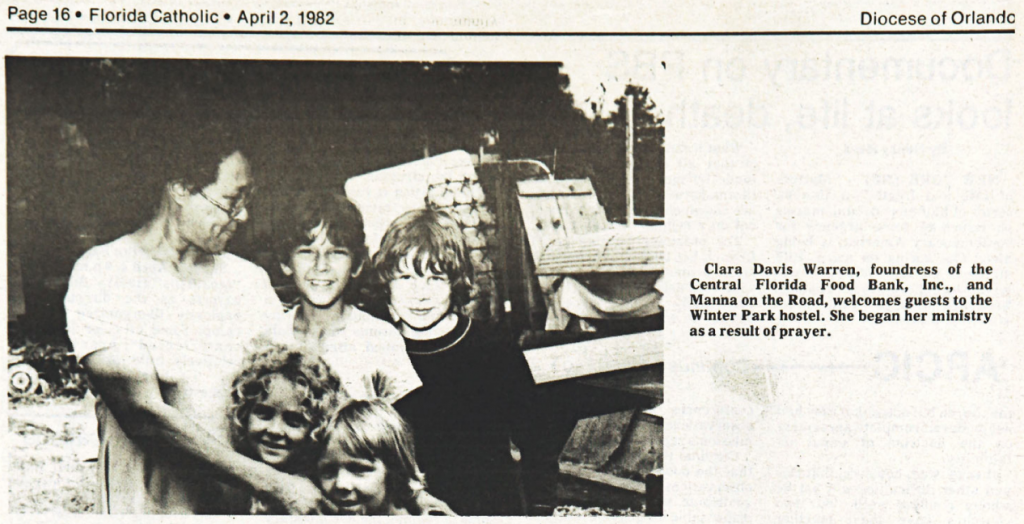 Sister Crean writes, “Several years ago, during her [Clara’s] daily prayer and meditation, she saw a “vision of people coming to my home in Apopka, walking three and four abreast.” Later in the morning, she heard a radio minister preaching about God’s gift of manna in the desert to the Israelites… [and] she realized God was calling her “to feed the hungry.”

Clara’s growing concern for transients and homeless families led to the acquisition of a large rooming house in Winter Park that she called “Manna on the Road.” There she provided emergency shelter “to the disadvantaged who are not able to be cared for by other social agencies or churches.”

Central Florida Food Bank and Manna on the Road were adopted by the Outreach Committee of St. Margaret Mary Catholic parish providing food and volunteers.

Clara Davis “C.D.” Warren was chosen as one of the nation’s top 100 unsung heroes in the Summer 1986 Newsweek Special Edition “Sweet Land of Liberty.”

“The Central Florida Food Bank consists of two ramshackle houses and a rusty old pickup, but it can be a godsend for people in need. Its founder, C.D. Warren, subsists herself at 60 on what she makes cleaning houses and sitting with old people… But she was raised to believe that you share what you have—and her homemade agency is her way of doing just that… Fancier agencies send her their hard cases, knowing she never says no. In her view, everybody is somebody, however poor.”

Commenting on the Newsweek honor a local newspaper columnist wrote: “While raising six children of her own, many of whom help her in her work; Clara has meant the difference between starvation and new opportunity for thousands. Whether she is sheltering people with no other place to go in her “Manna on the Road” center along Carolina Street in Winter Park or distributing food at St. Luke’s Missionary Baptist Church in southwest Orlando or driving into Central Florida rural areas to help even more hungry people, her mission is simple and direct: “Do unto others as you would have them do unto you.”

C.D. Warren never sought recognition as she did not like the limelight; but by 1985 a lot of people began to take notice. Linda Costa, one of the food bank volunteers, submitted applications to the Walt Disney World Community Service Awards in 1985 and 1986. As a result, the food bank was awarded $5,000 in 1985 and $25,000 in 1986, but Clara did not attend either banquet; she was too busy delivering food to people in need.

In the May 1, 1985, article, “Food Bank Founder Works While Disney Gives Award,” Orange Sentinel West writer Ramona Whaley asked why Clara had not accepted the award herself. “I’ve got food to deliver,” was her response.

“So, instead of being at the Contemporary Resort Hotel when her name was announced… Warren was out riding around Orlando and Apopka in a dump truck. Besides food, she and the Rev. Sam Smith, pastor of St. Luke’s Missionary Baptist Church … had spent the afternoon taking furniture to needy families who had been sleeping on the floor.

Below are some of the awards and honors conferred on Clara Davis Warren:

Sentinel writer Rose Simmons, reporting on the 1986 WDW Community Service Awards, spoke with Bob Matheison, VP for Magic Kingdom and Epcot Center. Commenting on the Central Florida Food Bank, he said: “They do this without a paid staff or government funding.”  Orlando Sentinel, April 23, 1986, p. A1.

“Clara Warren dies – Her vision to feed the poor fulfilled.”

“To her family and friends, she was an indefatigable inspiration, a Good Samaritan who for 20 years worked nights and weekends gathering and delivering food for the hungry throughout Central Florida. For Warren, it was the fulfillment of a vision.

First, she began handing out food from her little house in Apopka, where she was born… She was ready in 1979 to operate the Central Florida Food Bank from her Winter Park boarding house, soon to become a hostel for the homeless called “Manna on the Road.” By 1985, Warren was feeding about 300 families a month and caring for up to 10 homeless, aided by area churches and volunteers.”

Clara’s son, Nehemiah Wagner contributed thousands of hours to the food bank from the time it was created in the late 1970s. After Clara’s passing in 1987, he and his wife Joyce continued the work of the Manna on the Road and the Central Florida Food Bank/FOODChain for several years. In the Spring 1988 FOODchain newsletter, Mr. Wagner commemorates the life and work of his mother.

Mr. Wagner’s commitment to help people in need led to his involvement with the Coalition for the Homeless of Orlando, the Orange County Department of Community Affairs, and other service organizations.

Interviewed by Ramona Whaley for the Apopka Chief in November 1991, Mr. Wagner shared the advice his mother passed on to him: “Whenever you see someone in need, just do it. Don’t wait for the city or the government or anyone else…”

Wagner continued, “That’s my faith. That’s what real religion is about, taking care of the orphans and widows. When I can help people who cannot speak for themselves, the disabled and the disenfranchised, the older ones who built the community but now have lost their jobs, and especially the littles ones who have no bottle, it makes it all worth it.”

Clara’s mission was to serve others and she did not allow anything to stand in her way.

Her memory lives on in the hearts of thousands who turned to her for help in their time of need when no one else would. She gave them food, furniture, shelter, and counseling to get through the tough times, and inspired countless others to do the same.

The next time you catch yourself thinking, “I’d like to help, but…,” remember the accomplishments of Clara Davis Warren and the advice she gave her son Nehemiah – “Just do it!”

Photographs and documents from the Nehemiah Wagner family history collection. The Florida Catholic has given permission to use the April 2, 1982, article and photograph by Sister Elizabeth Crean in this post. 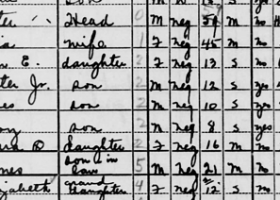 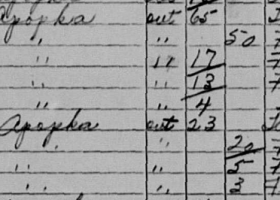 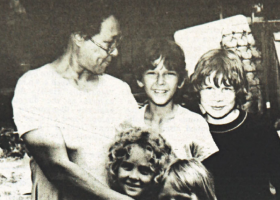 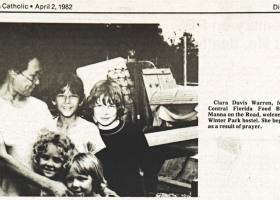 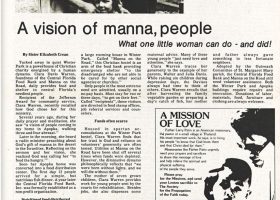 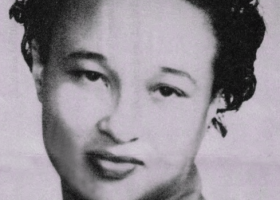 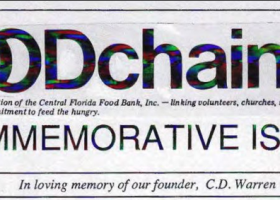 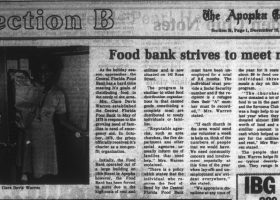 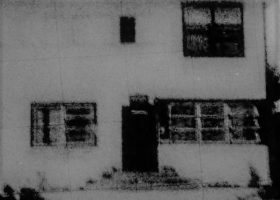 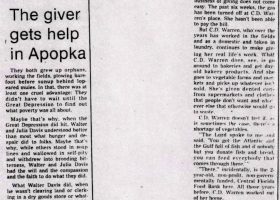 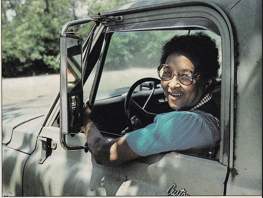 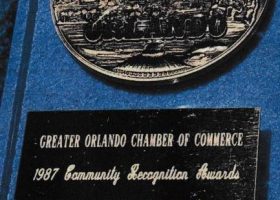 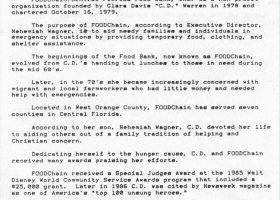 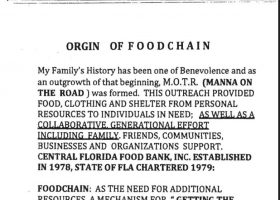 Origin of FOODchain from the Nehemiah Wagner family history collection. 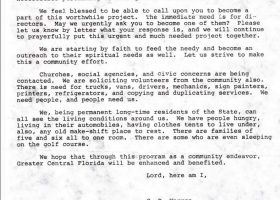 Information sheet on Manna on the Road

Information sheet on Manna on the Road from the Nehemiah Wagner family history collection. 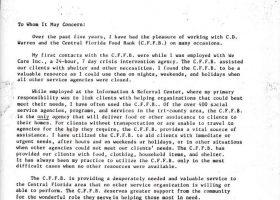 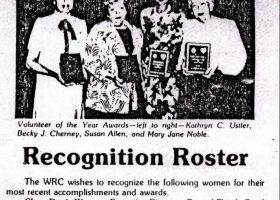 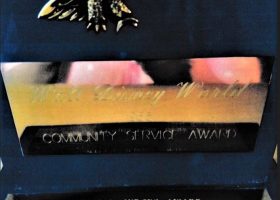 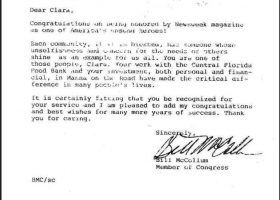 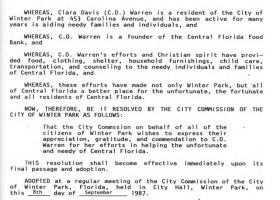 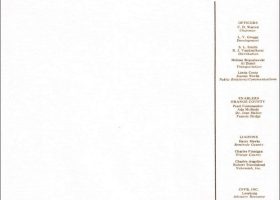 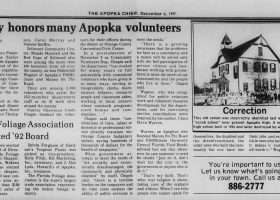 December 6, 1991 Apopka Chief - honoring members of the community for their service to others. From the Nehemiah Wagner family history... 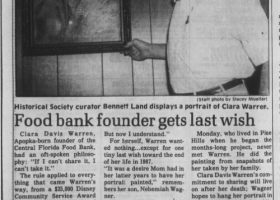 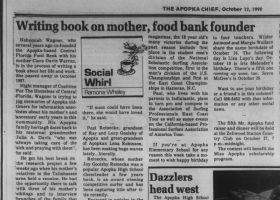