We’ve been married 50 years and we celebrated that this past year. The thing I admire most about him is the fact that he is as brilliant as he is and yet as humble as he is. You can ask him any question on any subject and he will explain it to you in great detail….

Educator Anna Mae Patz shares what she admires most about her husband, Dr. Benjamin Patz, in this oral history interview on October 31, 2011 at their home in Orlando. She discusses his teaching attributes as a professor willing to take time to explain material and a father of five who taught their children educational knowledge and practical knowledge.

Dr. Benjamin Patz’s scientific contributions to our area include working in the GENESYS Program at Cape Canaveral, Lockheed Martin, teaching at the  Naval Training Equipment Center, Rollins College, and the University of Central Florida. His students from the Department of Electrical Engineering and Computer Science at UCF recall Professor Patz as a patient teacher who spent diligent time with everyone, undergraduate or graduate.  In the GENESYS Program at the Cape his students were people working at Martin Marietta and NASA. Dr. Patz says, “They had interesting problems they would discuss with you… It was a good chance to go over control systems, electromagnetic fields, the boundary value problems.” 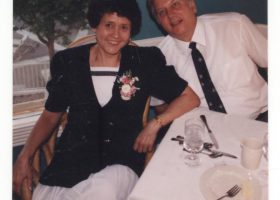 We've been married 50 years and we celebrated that this past year. The thing I admire most about him is the fact...