Miss Hyer was the oldest daughter of Edward Pringle Hyer who came here from Georgia with three of his brothers in 1875. Edward operated his own school books and supplies store on Orange Avenue from 1886 to 1889, and served on the city council during the 1890s.

Hatabel was one of Orlando’s first female insurance agents, among the first officers of the local Sorosis Club, and helped organize the Business and Professional Women’s Organization’s Orlando chapter.

Miss Hyer’s interest in collecting memorabilia led her to save the memories of her home town.  As a member of one of Orlando’s pioneer families Miss Hyer new stories about everyone and everything that happened over the years.  In the early 1970s she took a portable cassette recorder and visited older residents and engaged them in conversations to be recorded for posterity.

She imagined these recordings to be listened to as though one were listening in on an old “party line” conversation, when residents shared telephone lines and it was possible when one needed to make a call there would already be two parties on the line deep in conversation.  Thus began her Pioneer Party Line project, which gained interest among the Friends of the Orlando Public Library, who in turn began the Oral History Program.

Miss Hyer was interviewed by James R. Spence on February 1 and 8, 1975, for the Oral History Program of the Friends of the Orlando Public Library.  We are grateful for the Orange County Regional History Center‘s making these recordings available for Orlando Memory.

Hatabel Hyer on Home Remedies (29:28) – On March 19, 1975 Hatabel Hyer recorded her recollections of early home remedies, before there were doctors in the area.  She then talks about the early doctors who came to Orlando.

Hatabel Hyer on Lawyers (23:18) – Ms Hyer also recorded her memories of early lawyers in the Orlando area and then proceeded to talk about women’s liberation.

The following are of a more personal nature, of interest to family members and other family-history researchers.

Hatabel Hyer in search of ancestors – Part B (31:07) – Perryville, graveyard, the Samuel Warren Ewings, the Gregorys, “Aunt Duck”, the Brummels

John Allen Gano – Hatabel Hyer discusses the Gano papers Part 1 (30:04)
The re-election of Orlando’s first African-American city councilman (Arthur Kennedy) inspired Ms Hyer to record this discussion of some papers from John Allen Gano.  Mr. Gano was a prolific writer and had been the secretary of the Kentucky branch of the American Colonization Society.  This society’s mission was to finance and arrange for freed slaves to return to Africa, to colonize the continent.  This lead to the founding of Liberia.  Hatabel had found the papers in an old family attic and donated the them to the University of Missouri in 1953.  This interview was conducted by James R. Spence on September 20, 1976. 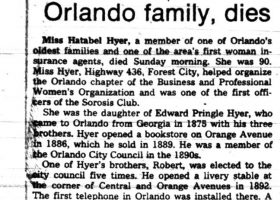 The obituary of Hatabel Hyer was published in the Sentinel Star on Monday 2 June 1980, page 4C. The Funeral Notice was also... 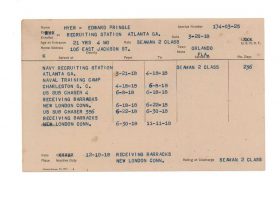 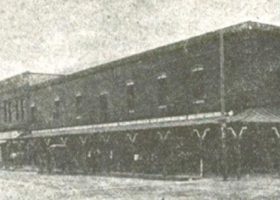 Ms Hyer's travels in search of family connections continues with Hatabel Hyer in search of ancestors, Part A.

On March 19, 1975, Hatabel Hyer recorded her recollections of early home remedies, before there were doctors in the area. She then talks about the early doctors who came to Orlando.

On March 19, 1975 Hatabel Hyer recorded her memories of early lawyers in the Orlando area and then talks about notable women and their accomplishments. To read more about Margaret Ekdahl's "Miss America" fame please see A Legendary Beauty: In '30, An Orlando Woman Was Called Miss America. Read more about Margaret Ekdahl's all too brief life and enjoy seeing collected photos of Florida's first "Miss America" at www.TampaPix.com/ekdahl.htm