In November 1976, I joined the team at Wendy’s International in Jacksonville, Florida. This was shortly after the home office in Columbus, Ohio bought back the stores which had been owned and operated by a franchisee.

This was at a time of unbelievable growth at Wendy’s with stores opening all over the country. Dave opened his first store in Columbus, Ohio in November 1969, and it did not have a drive-thru. In 1970, after perfecting the drive-thru with separate grill, beverage and Frosty machine, he opened his second store. The drive-thru put Wendy’s on the map. When I joined the company, Dave was in the process of buying back franchised areas that needed to be refurbished and brought up to corporate standards.

Beautiful new corporate offices were built on Douglas-Granville Road in Dublin, Ohio including a full size Wendy’s for training and testing new products. Wendy’s Management Institute was also created and management personnel from around the country spent two weeks there learning how to do everything the “Wendy’s Way.”

Dave Thomas is an American success story built on hard work and a drive to succeed. Dave was born on July 2, 1932, and put up for adoption six weeks later. His adopted mother died when he was just five years old, and he spent the next 10 years traveling with his father from town to town. Dave decided at a very early age that he wanted to open a restaurant one day – not just any restaurant – one with smiling, courteous employees, serving great tasting simple food of exceptional quality for a good price. Dave’s motto for Wendy’s was “Quality-Service-Price.” Dave worked in many restaurants growing up and found great mentors – but his relationship with Colonel Sanders Kentucky Fried Chicken made him a millionaire!

Dave Thomas loved Florida and had a home here in Fort Lauderdale. His daughter Melinda, for whom Wendy’s was named (her little brother could not pronounce her name and called her “Wendy”), attended college at University of Florida in Gainesville.

You can not imagine the excitement when we learned that Dave Thomas would be coming to Jacksonville to speak with managers and staff in 1979. Excitement gave way to action as the Area Director and Area Supervisors set out to make sure all the stores and staff looked amazing. I attended the managers meeting and Dave presented me with an autographed photo and a gold Cross pen and pencil set with Wendy’s logo in acknowledgement of my service. After the meeting, I found the notes Dave had made for his talk with the managers, written in his own hand.  I filed them with other memorabilia and found them in 2015 – 36 years later. One item in his notes was obviously dear to his heart and changed his life: “Free Enterprise System – Greatest Economic System in the World.” (Emphasis his.)

Dave was a simple man – big hearted, kind, humble, sincere and brilliant – not college smart but business and people smart.

As a young woman of only 27 years at the time, the thing that impressed me most about Dave was that he reminded me of my Dad – he really cared about his employees and made you feel at ease. He was a great leader! He often issued this challenge to all employees: “Let’s do ordinary things extraordinarily well.”

I took those words to heart and not only applied them to my job at Wendy’s, but every aspect of my life. I embraced Dave’s challenge to his employees and his  promise to customers,  and it has served me well.

Read about Dave’s challenging yet amazing and inspirational life on the Wendy’s web site.

Wendy’s will never be the same without Dave, especially after it was sold not long after his death. I miss you and the “old” Wendy’s, Dave! 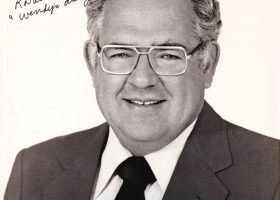 Autographed photograph of R. David Thomas - Wendy's Daddy - given to me when Dave Thomas came to Jacksonville, Florida to speak... 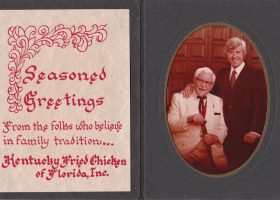 I was the Area Secretary for Wendy's International, Inc., Jacksonville, Florida Area from 1976-1982. Colonel Sanders was the best known mentor of... 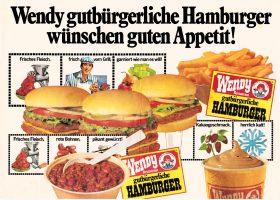 Wendy's went international and one of their newest locations was in Munchen, Deutschland - Munich, West Germany for you non-German speakers. The... 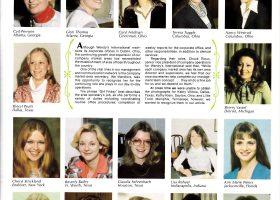 The January/February 1978 edition of the Hamburger Herald, Wendy's International corporate magazine includes a full page on the Area Secretaries - but... 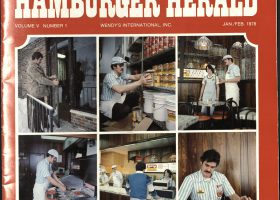 Wendy's International, Inc. in Dublin, Ohio, a suburb of Columbus, published the "Hamburger Herald" every other month. The Herald contains lots of photographs of franchise and corporately owned stores and staff members with news on new stores opening, marketing campaigns, etc.

Beginning in 1977 and continuing for some time, our Jacksonville Area office (secretary Kim Peters) created a weekly publication called "Wendy's World" which was distributed to the store locations in the greater Jacksonville area.