OM:  Hello, it is Tuesday, December 11, 2012. We are at the Winter Garden library, interviewing Mrs. Annie Bailey. Mrs. Bailey can you share with us please, how is was that you came to live in Winter Garden?

Mrs. Bailey:  My husband, George Bailey and I met while we were working at an advertising agency in New York City. We were married there in 1954 and had our first son there. My husband always had a desire to own a newspaper and he was always on the look out for one to purchase. From New York, we moved to Atlanta where we had three more sons. From Atlanta, we moved to Detroit and then to Dallas where George continued to work in an advertising agency. When to job ended in Dallas, George decided he wanted to move the family to Orlando. His parents lived in Florida and he wanted to be close to them. While I stayed in Dallas trying to sell the house, George came to Orlando in search of work. George met with Martin Anderson, the owner of the Orlando Sentinel at the time, who told him that the Winter Garden Times was for sale. He made an offer on the paper and the sale was approved. By that time, our house in Dallas has sold; so George came to Dallas and we moved everything by station wagon to Orlando. Our belongings, our German Sheppard, our cat and our boys all crowded together.

Our arrival in Winter Garden was very interesting; well, not so interesting really. Winter Garden in 1970 and Plant Street in particular was not as it is today. I was depressed really, because I had lived in so many large cities. I thought, “Oh, what have we done?” We moved into the little newspaper office on Boyd Street and I asked my husband what I should do, I had never worked at a newspaper before. He told me to open the mail, which I did.. Unfortunately, it was the end of the school year and the boys had not friends. However, we found our that the West Orange YMCA had just opened up a summer camp at Lake Butler, a bus came to the office and picked them up so they had a good time that summer. I adjusted to my life in Winter Garden. I discovered many nice people in Winter Garden and Windermere. Our first home was in Mt. Verde at the Mt. Verde Fish Camp, but we soon moved into Winter Garden.

OM:  Mrs. Bailey, you said that you and your family moved to Winter Garden in 1970 and purchased the Winter Garden Times (now called West Orange Times). Can you share with us some of the changes since then?

Mrs. Bailey:  Well as you can imagine there have been many changes since then. First are the changes the computer has brought to the printing business. When we first purchased the Times, the paper was printed with a press. This press made so much noise you could here it blocks away from the office. The individual stories had to be cut and pasted onto a grid to be proofed. If there was a mistake, a new word or line had to be printed and set with wax over the proof on the grid. That is what I love about the computer now, if you make a mistake you just go back and correct it. It was very different in those days.

OM:  Mrs. Bailey, can you tell us what you believe the future holds for Winter Garden?

Mrs. Bailey:  I think the future for Winter Garden will be wonderful. I have seen it change and grow so in the last few years and I think it is going to continue. I think it is wonderful what has happened since we moved here, it is unbelievable. Downtown Winter Garden and Plant Street is something I would not have been able to recognize from when I first saw it. Every one agrees with me, there are some many people who love Winter Garden now. It was not always like that. Of course, it was mostly citrus when we moved here, although the citrus has died away. With the citrus gone, something else has popped up. That is what is so wonderful about Winter Garden, it started a new life and I think it is going to go on and on; I’m sure. 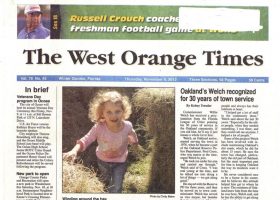